Rookies Thomas Rawls and Tyler Lockett combined for four touchdowns as the Seahawks remained relevant in the NFC with a 29-13 victory over San Francisco Sunday. 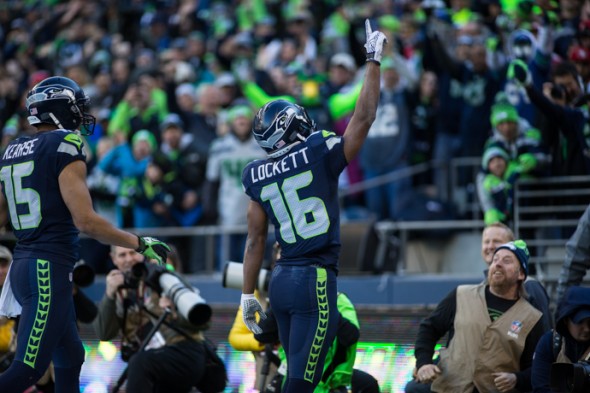 Rookies Thomas Rawls and Tyler Lockett largely kept the Seahawks from becoming irrelevant for the remainder of the season Sunday, combining for 308 yards of total offense and four touchdowns in Seattle’s 29-13 victory over the San Francisco 49ers at CenturyLink Field (box). Each scored twice and QB Russell Wilson delivered his best game of the year as the Seahawks snapped a two-game losing streak at the Clink, improving to 5-5.

Oddly enough, it might have been when the Seahawks declared RB Marshawn Lynch inactive with an abdominal injury. That meant Rawls, an undrafted rookie out of Central Michigan, would start. He did so spectacularly, even historically, rushing for 209 yards and a touchdown and catching three passes for 46 and another score.

Astounding as were Rawls and Lockett, it all started with Wilson, who completed 24 of 29 passes (82.7 percent) for 260 yards and three touchdowns, and created myriad opportunities for Rawls and Lockett to shine. Wilson threw TD passes of 24 and 11 yards to Lockett and 31 yards to Rawls. His passer rating of 138.5 was his best of the season and the highest since he posted a 139.6 mark against New Orleans Dec. 2, 2013. That game against the Saints was also the last time Wilson threw three TDs.

Rawls, who carried a Lynch-like 30 times, had 96 rushing yards in the first half, nearly becoming the first Seattle back to reach 100 in the first two quarters of a game since Lynch had an even 100 at Buffalo Dec. 16, 2012. Rawls has three 100-yard rushing games this year (also 104 vs. Chicago and 169 at Cincinnati).

Steven Hauschka, who made his first 17 PATs this season, missed twice Sunday, once when his effort was tipped at the line of scrimmage.

The Seahawks have held the 49ers to one or fewer touchdowns in nine consecutive meetings. The last team to go nine consecutive games against an opponent with one TD or fewer was the Indianapolis Colts against the Buffalo Bills from 1989-94.

“I liked the way we played across the board. It was a really good football game for us. The defense did a really nice job. But the offense did a great job. Russell had a really good game and I’m really fired up about what Rawls did. He has really played well when he’s had his chance to start. This is what it’s supposed to look like for us. So it was really a good day”– Seahawks coach Pete Carroll.

“This is the No. 1 game in my career, and to do it at the highest level in the NFL is great. I felt like I was back in high school. Today, we came out aggressive and strong and set the tone up front with the offensive line. We had relentless effort. I like the physical nature of the game, and I think I can do some amazing things” —  Rawls

The Seahawks remain at home for the third consecutive week to host the Pittsburgh Steelers at 1:25 p.m. Sunday (CBS).