A record-breaking day on the ground from Thomas Rawls was a key part of Seattle’s 29-13 triumph over the 49ers. The rookie dashed ran for 209 yards and a score, plus a receiving TD. 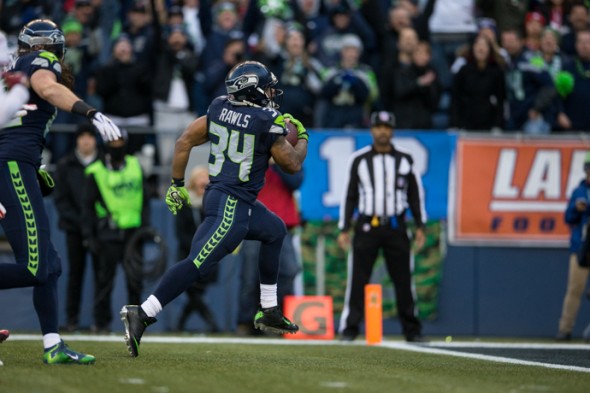 As with Spinal Tap’s bass amps, RB Thomas Rawls is constantly turned up to 11. Standing in for an injured Marshawn Lynch Sunday, Rawls churned out 209 yards on 30 rushing attempts, a franchise record for a rookie as Seattle defeated San Francisco, 29-13.

Rawls set the tone during Seattle’s first drive. Catching a swing pass out of the backfield, he sprinted down the sideline, steamrolling CB Tremaine Brock instead of going out of bounds.

“I think he thought I was going to go out of bounds,” Rawls said. “Little did he know, I’m not running out of bounds. I’m looking for contact.”

Looking for contact is a key part of Rawls’s ground game. If the five-foot-nine-inch back ran scared, he’d spend a lot of time flat on his back. By attacking defenders at point of contact—as he often does when he jukes into defenders—the 220-pounder takes the unprepared with him.

Rawls says that the style is part of his DNA.

Rawls is uncommon. The undrafted rookie from Central Michigan, and a former recruit to the University of Michigan, carved out a spot for himself with the Seahawks as a backup for Lynch and veteran specialist Fred Jackson, but has quickly shown that he can carry more of the burden.

“Any time I can come to the sideline and (Lynch and Jackson) look at me like they look at each other, and I’m a rookie, I’m like ‘Man, that gives me the most confidence to just go out there and be free.’”

Rawls was often free, zig-zagging through gaps and crashing through tackles. The 22-year-old picked up his second NFL touchdown in the first quarter off a two-yard run. The youngster also snagged his first pro receiving score, grabbing a pass from Russell Wilson and weaving his way 31 yards to the end zone.

Jackson was happy for Rawls’s success.

“It’s a young dude going out there and doing his thing and having a great day,” said Jackson. “We told him earlier in the day that he was going to be given the ball a lot . . . and he took advantage of it and made some plays.

“He doesn’t want to be taken down by the first guy; he finishes all of his runs.”

His style, Jackson says, contrasts with Lynch’s patient runs waiting for an opening.

“I think (Rawls) is quicker,” Jackson said. “He’s a little shiftier than Marshawn. He can get in and out of cuts fast. He likes to beat you up, too.”

Credit should also be given to the offensive line, which opened gaps for Rawls all game.

Okung said clearing holes for Seattle’s tackle-resistant running backs has been the priority.

“That’s something that we’ve always done,” he said. “Marshawn’s been amazing at finding the holes, and Rawls has really taken after him. When he’s able to stay up, we can get guys off of him and he’s breaking tackles to make big plays.”

Rawls has also shown consistency. Sunday was his third game with more than 100 yards on the ground, including his previous career best of 169 yards against the Cincinnati Bengals Oct. 11.

With Lynch traveling to Philadelphia Monday to have his abdominal problem examined in greater depth, Rawls will be called on to attempt to blow past the Pittsburgh Steelers Sunday. The Steelers allow an average of 93 rushing yards per game, fifth-best in the league.

“(Rawls’s performance) shouldn’t be a surprise to us because he’s played really well when he’s had his chance to start,” said Carroll.

Sunday’s performance was another sign that Rawls belongs in the league. For the Seahawks, it’s another promising entry in their ledger of turning overlooked young players into solid NFL contributors.