After holding off a surging UCLA in the second half, Seattle U. is set for a road game at Syracuse in the third round of the NCAA Division I men’s soccer tournament. 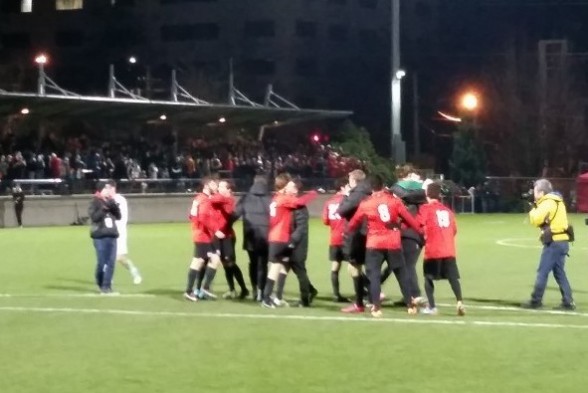 Seattle U. celebrated on the field after its big win against UCLA. / Andrew Harvey, Sportspress Northwest

Thanks to a goal late in the first half by senior forward Hamza Haddadi, the Seattle University men’s soccer team pulled off what coach Pete Fewing described as “the biggest win in program history” since making the jump to NCAA Division I.

The Redhawks withstood a late onslaught by UCLA to win 1-0 at Championship Field Sunday night on Capitol Hill, and will travel to Syracuse to face the Orange in the third round of the NCAA tournament at 10 a.m. PT Sunday.

According to Fewing, spirits are high, with an attitude that if they can beat UCLA, they can do anything.

“We’re not going to disrespect anybody we have coming next, but UCLA is a brand name, it’s a marquee program,” said Fewing. “They’ve got five national championships in their history, so (the win) gives us confidence for sure.”

Confidence will be important when Seattle U. faces Syracuse so far from home. The Orange are Atlantic Coast Conference champions, and are the sixth seed in the tournament. Syracuse overcame a 1-0 deficit against Dartmouth Sunday to earn its spot in the third round.

“We’ve got to regroup,” said Fewing. “We’ve got a couple guys that are banged up.”