Thomas Rawls and Tyler Lockett produced a unique feat in Seahawks history Sunday, and Rawls made his way on to a statistical list that includes several NFL icons. 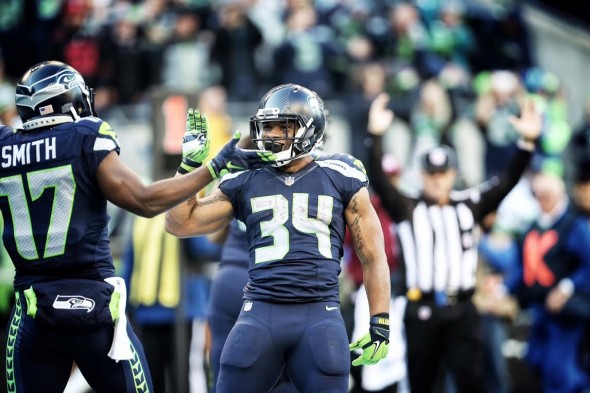 The Seahawks have played 649 games (regular season and playoffs) over the past 40 years and in only 15 did a rookie score multiple touchdowns. Until Sunday, the feat hadn’t occurred since Dec.12, 2012 when Russell Wilson ran for three in a 50-17 shellacking of the Buffalo Bills in Toronto. Before that, the last Seattle rookie with multiple TDs was Joey Galloway, who tallied three times (one rush, two passes) at Jacksonville Nov. 12, 1995.

In only one of those 15 games did two rookies score multiple TDs. Thomas Rawls and Tyler Lockett created that bit of franchise history Sunday, Rawls running two yards for a TD and catching a 31-yard pass for another, Lockett tallying twice on receptions of 24 and 11 yards as the Seahawks romped past overmatched San Francisco 29-13.

Pete Carroll naturally didn’t allow the obvious lack of quality in Sunday’s opponent to curb his enthusiasm for Rawls and Lockett.

“He’ll attack guys down the field,” Carroll said of Rawls, who ran for a Seattle rookie record 209 yards after replacing an injured Marshawn Lynch. “That was the first impression I got about Thomas, that’s why I liked him from the start. He has that mentality about him, he’s a very aggressive kid, and a very aggressive style of runner, and I think that’s probably what we like the most about him.

“He did a lot of good things with his feet. He made some nice little moves and cuts and wiggling through the line of scrimmage. The fact that he’s got this nature about the way he finishes runs, and how tough he was, is something we really love.”

As for Lockett, Carroll said, “He’s right in it, he’s just one of our guys now. In the second half of the season, he’s just a regular starter, contributor for us. We count on him making big plays and running down the field, but he’s also a really good route runner, too. It’s like he’s just one of the fellows out there for us.”

Only four Seahawks rookies did what Rawls did Sunday, scoring touchdowns via the run and the pass in the same game, none of them named Curt Warner, Shaun Alexander or Beast Mode:

And only four rookie receivers ever caught two touchdown passes in a game, none of them named Steve Largent:

Depending on how you define “rookie,” Rawls is either the only rookie in NFL history with at least 250 yards from scrimmage, a rushing touchdown and a receiving touchdown in the same game, or one of two rookies to do that.

On Dec. 14, 1986, Herschel Walker of the Dallas Cowboys, in his first NFL season, had 292 yards from scrimmage that included an 84-yard TD run and an 84-yard TD catch in a 23-21 loss to Philadelphia. Walker already played three seasons (1982-85) with the New Jersey Generals of the United States Football League.

Elias Sports Bureau doesn’t acknowledge rookie status for Walker in 1986, which makes Rawls the only player with 250+ scrimmage yards, a rushing TD and a receiving TD. But Pro Football Reference identifies 1986 as Walker’s rookie season. Arbitrarily going with that, the following produced the most yards from scrimmage with at least one rushing and one receiving TD in the same game:

Rawls, with 169 at Cincinnati Oct. 11, already has two yards-from-scrimmage totals that top Lynch’s career high of 167. Rawls is also the only undrafted rookie in modern NFL history (since 1960) to run for 200 or more yards in a game. Given Lynch’s abdominal injury, which may require surgery and sideline him for the remainder of the season, Rawls is the best bargain the Seahawks have made all year.