Washington State enters the Apple Cup Friday with an 8-3 mark and knowledge that they are 15 points removed from an undefeated season. Definitely not your father’s Coug team. 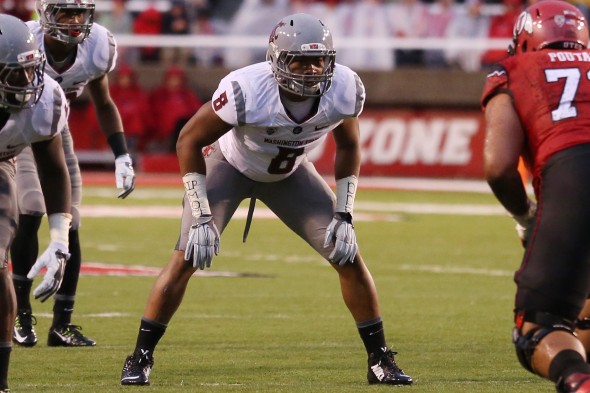 PULLMAN – The first concrete evidence that Washington State football might return from the dead this season occurred in the second game. Trailing by four with 91 seconds left to play at Rutgers, the Cougars marched 90 yards to score the winning touchdown with 13 seconds to go.

Inspiring it was, but two weeks later, the Cougars were just 2-2 after dropping their Pac-12 Conference opener to California. A shocking loss to Portland State in the season’s first game still cast a pall over the program, and a daunting Pac-12 schedule made a ninth consecutive losing season seem quite possible.

Alas, it is rarely an easy task for outsiders to gauge the grit of young athletes hidden away on the Palouse. Before a ball was snapped or a tackle was made this season, WSU players emphatically declared their team was nothing like the 3-9 squad of the prior year.

Part of the reason for increased energy was decreased tension. Suffice to say, the 2014 Cougars were not prone to gathering around post-game campfires to share cocoa and s’mores.

“I think that’s the biggest thing that was missing last year – not a real ‘tight’ locker room,” quarterback Luke Falk said. “We’ve got it this year.”

“We’ll punch you in the mouth,” linebacker Peyton Pelluer said, “and we’ll outplay you.”

Arguably, the 20th-ranked Cougars have outplayed every opponent this season, including the losses to then-No. 24 California and then-No. 8 Stanford. In fact, the Cougars – 12 years removed from their previous winning season (WSU finished 6-6 in 2006) — are just 15 points removed from an undefeated season. The seven-point loss to Portland State was WSU’s most lopsided defeat.

More fun facts for lovers of all things crimson: Win Friday at Washington (12:30 p.m., FOX) and win a bowl game, and the Cougars would finish 10-3. That is impressive in itself, but even more so when one considers that Paul Wulff, Mike Leach’s predecessor as head coach, failed to win 10 games total during his four years on the job. Leach’s 20-28 record in four years at WSU is underwhelming, but it looks positively Vince Lombardi-ish compared to Wulff’s 9-40 mark.

Some of the reasons for WSU’s turnaround are obvious. Recruiting benefited when more than $120 million was poured into Martin Stadium upgrades and construction of the adjoining football operations building. Teenagers like shiny toys, and the Cougars’ new toys shine brightly.

Falk, who may miss Friday’s game with an apparent concussion during Saturday’s game against Colorado, leads the nation with 4,266 passing yards. That ranks sixth in Pac-12 history and is just 396 shy of the record, set by Oregon State’s Sean Mannion in 2013. Falk’s 36 touchdown passes are tied for seventh in conference history. The record is 42, set by Oregon’s Marcus Mariota last year.

Marks leads the Pac-12 with 14 touchdown receptions, tied for second in the nation. On the other side of the ball, fiery new defensive coordinator and secondary coach Alex Grinch has successfully coaxed his troops into playing with more aggression, cohesion and spirit. The Cougars already have 20 takeaways, 12 more than last year, and rank eighth in the nation with eight tackles for loss per game under Grinch.

“He’s proved to everybody he knows what he’s doing,” safety Taylor Taliulu said.

“He had a plan; he had a blueprint,” LB Jeremiah Allison said. “When we followed it and everything fell in line, it just became easy to grasp.”

Leach deserves credit for hiring Grinch – a first-time coordinator — and for bringing in the lightly recruited Falk as a walk-on. The villagers were chasing Leach with torches after the Portland State game, but the coach earned kudos for keeping players focused after the opening loss; after blowing a pair of fourth-quarter leads the following week at Rutgers; and after falling behind by 10 in the fourth quarter at Oregon before winning in double overtime.

“This ball club is resilient, it’s focused and it really has taken on the entire personality of our head coach,” WSU athletic director Bill Moos said. “We’ve been waiting for this.”

Wazzu fans were beginning to wonder if the wait would ever end after the loss to Portland State. Twelve weeks later, the Cougars are 8-3 overall, 6-2 in the Pac-12 and headed to a bowl game.

“This wasn’t fairy dust that was blown on us,” Moos said. “We had to work to get where we are.

“A lot of things had to get put into place. We’re not in the position yet to be content that we’ve arrived, because we haven’t. We’ve shifted into a new gear, and we’ve got two more ‘gears’ (games) to go.”

Washington State’s bowl destination – Holiday? Alamo? Sun? – will be determined in part by the outcome of the regular-season finale at Washington.

Win or lose Friday, the Cougars may be on the verge of an extended run of bowl appearances. Falk is a redshirt sophomore, Marks a redshirt junior. Both are eligible for the 2016 NFL draft, but neither has pro scouts drooling just yet. Falk lacks a howitzer throwing arm, and Marks does not possess breakaway speed.

The Cougars will lose a solid group of senior linemen on both sides of the ball, but most receivers and defensive backs and all of the running backs and special teams mainstays return. Perhaps most importantly, the Cougars return an impressive group of leaders.

“We know how to win games now,” Marks said. “Even when things aren’t going right, we can find a way to win.”

The Cougars proved that Nov. 14 when Falk connected with Marks in the end zone with 3 seconds left in a 31-27 road win over then-No. 18 UCLA. The victory surprised most observers, prompting a reporter to ask Marks after the game if the Cougars were getting the respect they deserve.

“No, we haven’t,” Marks shot back in his typically brazen fashion. “Everyone knows that. People are not going to give us respect until they absolutely have to.

Less than 24 hours later, the Cougars cracked the Top 25 for the first time since 2006. That brought back warm memories for Cougars radio analyst Jason Gesser, who quarterbacked Top 10 teams at Washington State in 2001-02.

“I think that’s where you see this team right now. When that happens, it’s a beautiful thing.”