The rookie running back is sufficiently sensational to draw a comparison to Earl Campbell from Pete Carroll. The Seahawks coach backtracked a bit, but his point is not too far-fetched. 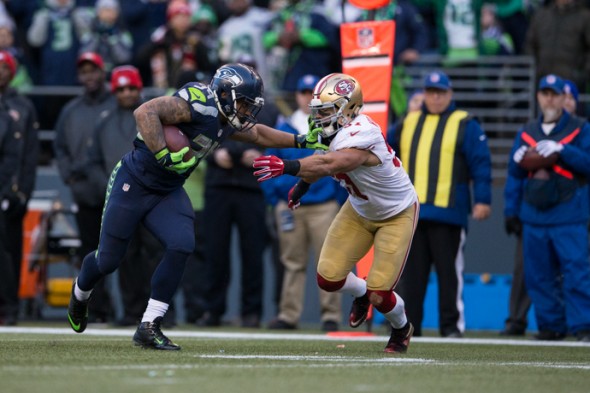 Pete Carroll knows better than to exaggerate when he gets excited. But he can’t help himself when the subject is Thomas Rawls.

During his Monday radio appearance on ESPN 710, the Seahawks coach made an analogy between the rookie running back, who now qualifies for the descriptive term, sensation, and Hall of Fame running back Earl Campbell.

“I did, I did,” Carroll admitted, sheepishly. “I did that in the sense of challenging Thomas more. I’m not putting him in that same class. He’s got a ways to go.”

No backpedaling, Pete. Gotta own it.

But after 209 yards rushing Sunday against San Francisco, the analogy is not nearly as wild as anyone would have imagined when Seahawks training camp began. Particularly in view of the injury absence of RB Marshawn Lynch — in Philadelphia this week for an exam that could lead to surgery for a sports hernia that would all but end his season — Carroll is fully entitled to hyperbole.

“For those who didn’t watch him, Earl was able to beat you with his speed and beat you being physical,” he said of the Houston Oilers star who gained almost 10,000 yards from 1978 to 1984. “He’d pick out guys and run over them. And sometimes he’d make you miss.”

As does Rawls. The powerful kid blasted 49ers cornerbacks and juked linebackers to break Curt Warner’s 1983 club rookie record (207) for yards in a game, second-most in NFL history for first-year player. After four starts, he is already 13th in the NFL in rushing (604 yards), second in yards per attempt (6.0) and tied for fifth in runs of 20+ yards (six).

He was strong enough to bump two veterans, RBs Robert Turbin and Christine Michael, off the team. The reliable Turbin turned an ankle in preseason and surprisingly found himself cut. The disappointing Michael was a second-round pick whom the Seahawks traded last month for a seventh-round pick to Dallas, where he has since been cut.

“Thomas was part of that decision,” Carroll said. “Both those guys are good players. But (Rawls) had a way about him that might be special. That’s why we made that choice.”

Special is the term used in Seattle to describe Lynch. Rawls is sufficiently special to begin speculation that Rawls might be able to throw Lynch off the roster too. Not now, but by 2016, presuming a return to health by Lynch, he carries an $11.5 million salary that would be hard to justify if Rawls continues to produce at the minimum salary for an undrafted free agent.

Carroll didn’t know what the medical options were for Lynch, but conceded that surgery “could happen.” Asked how likely it was for Lynch to be declared healthy for Sunday’s game against Pittsburgh, he said, “I don’t know about that — it’s legitimately bothering him.”

What is exciting for Carroll is that Rawls seemed to dispatch on Sunday his chief weakness — catching. He had three receptions for 46 yards, including a 31-yard touchdown.

“He did a really good job catching the ball — I was fired up for him,” Carroll said. “He’s not a featured throw-and-catch guy for us. Fred (Jackson) has great hands and  great catching range, so you look to throw to him. Thomas hasn’t shown that, but he came through great.”

Rawls was the object of much curiosity at Carroll’s weekly presser, because his fresh legs and energy could be a powerful boost as Seattle attempts Sunday to beat a team with a winning record (Steelers are 6-4) for the first time this season.

“He’s got a unique body,” Carroll said. “Not real tall (5-foot-9, 220 pounds), great strength in his lower body. He puts his foot in the ground and — bang — he cuts. Sometimes he looks like he almost surprises himself with his cuts. When he goes, he’s fast — 4.4 speed. He’s still looking to find somebody to hit.”

Even though Lynch has a league-wide reputation for being a nasty chap to bring down, his most impressive feat is carrying tacklers for extra yards. He might have the best collection of three-yard gains that started as two-yard losses in NFL history. But he doesn’t necessarily head-hunt as does Rawls.

“There’s a little difference in how they hit the line of scrimmage,” Carroll said. “Marshawn has extraordinary vision. He sees things differently than Thomas. Thomas is going to hit it, and find out what’s going on later. He hits first, and sees what happens.

“Both are tremendously effective. After his first read, Thomas puts his foot in it and goes. He’s not as likely to try to make a guy miss as Marshawn, who will fool you and fake you.”

Which brings us back to the majesty of Campbell. As much as he was perhaps the most powerful back in the game’s history, he trained defenders to start preparing for the blow, then changed course as they were in mid-cringe.

It was a splendid thing to watch. If Rawls comes anywhere close, the post-Beast future of the Seahawks is much less perilous.

Carroll said WR Doug Baldwin and C Patrick Lewis had mild ankle sprains, but were optimistic about being ready for Sunday . . . LB Bruce Irvin (knee) and WR Paul Richardson (hamstring) are longer shots to return . . .  CB Jeremy Lane is finally green-lighted to return, 10 months after recovering from a broken left arm and a torn ACL on the same play in the Super Bowl. He’ll be in the mix for the nickel back spot as well as the corner, where Cary Williams had a poor game against the 49ers and was replaced in the fourth quarter by DeShawn Shead. Carroll said Shead was the defense’s best player at forcing fumbles.