Surgery to fix a sports hernia went well for RB Marshawn Lynch Wednesday in Philadelphia, according to Seahawks coach Pete Carroll, who said Lynch could be back sooner than expected. 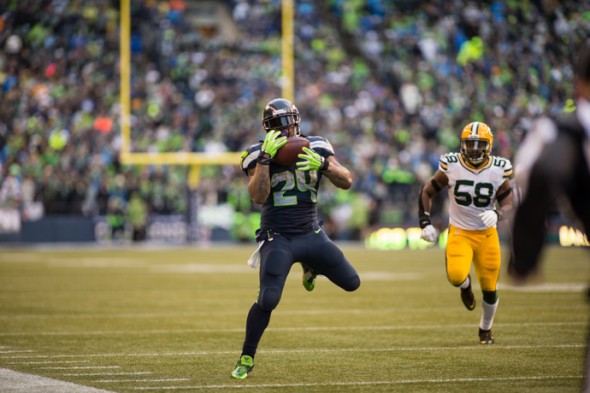 Marshawn Lynch has been the focal point of Seattle’s offense since 2010. / Drew McKenzie, Sportspress Northwest

“The doctor was very optimistic about a quick recovery and that could mean within three or four weeks, something like that,” the Seahawks coach said at his Wednesday press conference. The Seahawks will keep him on the active roster.

Asked whether Lynch could miss the season,  Carroll said, “You have to say there’s a chance, but we don’t expect that to happen . . . they fixed everything that was wrong and the doctor was very optimistic about his return.”

Following Sunday’s win over San Francisco, Lynch flew to Philadelphia to consult with specialist Dr. William Meyers, the same surgeon who recently operated on Mariners star Robinson Cano. The decision to proceed with surgery was made Tuesday.

Rookie Thomas Rawls, who rushed for a Seattle rookie-record 209 yards in the 29-13 victory over the 49ers, becomes the featured back. Rawls has three 100-yard rushing games this season with Lynch battling various ailments.

Lynch has been the focal point of Seattle’s offense since the Seahawks acquired him in a trade with Buffalo early in the 2010 season. In 82 games, Lynch rushed for 6,347 yards and 57 touchdowns and caught 158 passes for 1,309 yards and eight TDs.

The 29-year-old Lynch signed a two-year contract extension in March that included a $12 million guarantee for 2015 and $9 million in 2016 and $10 million in 2017. It’s now a question whether Lynch, given his age and the emergence of Rawls, will collect anything beyond this season.