Thiel: A big deal for Huskies; big loss for Cougs

Huskies coach Chris Petersen saw the Apple Cup as a bigger deal than Mike Leach. So he invited UW legends, including Sixkiller, Moon and Milloy, to explain what had to happen. 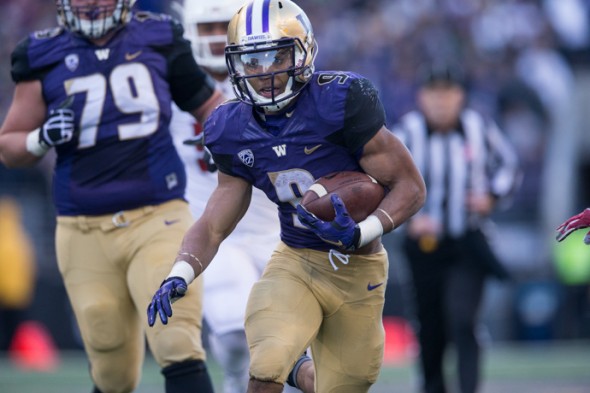 Without saying so directly, coach Chris Petersen conceded that the Apple Cup was not just another game. Petersen has lived in the Northwest long enough to know the tradition, and has seen Washington State coach Mike Leach put together a team good enough to create urgency in Montlake.

Also last week, he was completing successfully a negotiation for a two-year contract extension. He had to look good.

So the 108th edition of the rivalry was not just No. 12 on the schedule. At Husky Stadium Saturday, it was hammer time.

To make sure his Huskies, many from California and half the roster made of freshmen and sophomores, understood the local intensity, Petersen reached into history for some Huskies legends to address the situation at practice: Sonny Sixkiller, Warren Moon, Michael Jackson, Lawyer Milloy, Jermaine Kearse.

What did they say, Chico McClatcher?

“Basically,” said the Huskies wide receiver, “kick their asses. There’s no losing to the Cougars.”

Leach, on the other hand, admitted that he and his staff did nothing right ahead of the game.

“Most of our problems go back to coaching,” he said. “We didn’t have them prepared to play.”

Leach, for a change, was spot on.

For the Huskies, more was on the table. The Cougars came in at a surprising 8-3 with a bowl bid guaranteed. A loss for the 5-6 Huskies meant they would have been at the tail end of a bloated, 80-berth bowl system that would have allowed them in only via exemption to the six-win minimum, sort of like scroungy waifs who talk the bouncer into letting them into the concert a half-hour after the start.

The matter of an exemption for 5-7 came up at Petersen’s Monday press chat. He made a face like a child experiencing his first cigarette.

That game likely will be the Heart of Dallas Bowl, a bottom-tier party the day after Christmas that excites few beyond the coaches who savor the 15 extra practices. It’s also a time to let the big boosters drink and eat on the athletic department’s tab, which in the long run is just as important.

Petersen needed to win this game, so he violated his own maxim about never getting too high or too low for any game. He wanted the Huskies geeked.

That’s when he invited in the old warriors, who spoke of olden days when teams spoke harshly of one another pre-game, and treated each other poorly in-game. Such behavior, in the sanitized NCAA world, now is considered churlish.

Which doesn’t mean that the stories were not inspirational as well as aspirational.

“We brought in some guys who have a lot of passion for this program, a lot of history with his rivalry,” he said. “We have some young guys, and we wanted to make sure they knew the importance of this thing.

“We live in our own little bubble here; don’t pay a lot of attention to things that are out and about, (like) the media and what people are saying around town.”

That conversation outside the monastery was, well, a little different.

It was less about the Huskies and primarily about the 20th-ranked Cougars and the possibility the program may have come of age. WSU might even survive the injury absence of QB Luke Falk, the nation’s leading passer whose post-concussion status was kept so shrouded in Pullman that only Edward Snowden knew that redshirt freshman Peyton Bender was going to start.

But the exotic view of the Cougars wasn’t quite true. Falk might have avoided some of the seven turnovers, but he wasn’t going to attempt to tackle McClatcher, RB Myles Gaskin, QB Jake Browning, WR Jaydon Mickens and the rest of the offense that put up 443 yards.

McClatcher may well have had the play of the game when he took a took a toss on a reverse sweep in which it appeared every Husky blocked every Cougar as it was diagrammed. McClatcher scored from 26 yards the Huskies’ first touchdown for a 7-3 lead that was never threatened.

Combining the triumph with blowout conference wins over Arizona and Oregon State, the Huskies had a three-game advantage of 146-20, suggesting that they should schedule more of these BCS-level opponents. However, keeping them humble are defeats to Stanford, Oregon Utah and Cal, and particularly a 27-17 loss at Arizona State two weeks ago in which they had a halftime lead, 17-3, identical to the Saturday break.

“That wasn’t even talked about,” Petersen said, although it crossed his mind: “I looked at the score and thought the same thing.”

Petersen saw some growth even since the ASU loss in learning how to handle early-game success. In the third quarter, the Huskies scored on a 69-yard interception return by standout CB Sidney Jones, and countered the Cougars’ only TD of the game — a short-field gift after Jake Browning’s only interception — with the remarkable freshman Gaskin, who was ridden hard on a long drive that he finished from five yards, dousing what remained of Cougars embers.

“I tell these guys, I do the talking early in the week,” Petersen said. “The closer to the game, the less talking I do. The players start to take that locker room over, in the right way. I didn’t have to say a thing at halftime.”

The easy win, UW’s third in a row in the Apple Cup and second consecutive blowout, required no words to express that the rhetoric about WSU’s arrival at parity with Washington was premature.

As a predecessor of Petersen’s at Washington once said famously: