Coach Mike Leach admitted he and his coaches didn’t prepare the Cougars properly for the Apple Cup, but still managed a shot at the Huskies after a 45-10 humiliation. 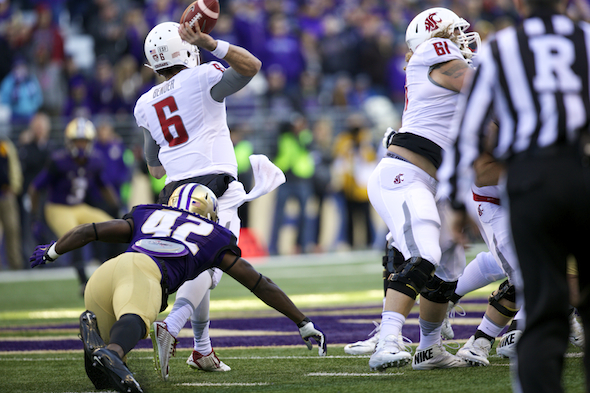 The Washington State Cougars were unanimous in acknowledging they played horribly in Saturday’s Apple Cup. However, the Cougars almost matched their sky-high turnovers total when offering varied theories behind their wretched performance.

Following are five explanations – one per lost fumble – the 20th-ranked Cougars came up with following the unranked Huskies’ 45-10 romp at Husky Stadium.

LB Jeremiah Allison: “They wanted it more than we did.”

OT Cole Madison: “We waited for it (control of the game) to come to us. It never did.”

Let’s toss in two bonus explanations for a total of seven, which matched WSU’s turnovers.

Leach: “We need to find a way to coach these guys better, because we didn’t have them ready to play.”

Madison, asked if he agreed with Leach that coaches didn’t do a good job of preparing the Cougars for the game: “I guess not. It showed on the scoreboard.”

Leach and Madison deserve points for honesty. However, Madison lost points for overlooking the obvious – no coach in history has ever made a turnover – and Leach lost points when he watched his team get thrashed every which way for 3½ hours, then declared, “We’ve certainly beaten teams that are considerably better than Washington this year.”

So much for losing with class. Leach also showed questionable judgment in explaining – sort of – the absence of QB Luke Falk.

“Luke chose not to play,” Leach said, “and we chose for that to be the case.”

Thus, Leach made it sound as if Falk had a choice in the matter. Multiple sources connected with the Cougars say Falk suffered a concussion – his second head injury in as many games – the previous Saturday against Colorado.

Leach, of course, almost never says a word about player injuries. Nothing changed Saturday in that regard, and Leach wouldn’t even say when he decided to give Bender his first college start.

“That’s definitely none of anybody’s business in here,” he told a roomful of media.

Bender, a redshirt freshman, said Leach told him Sunday he would start against the Huskies. So much for Leach’s latest game of secrets with the media and, therefore, with the fans who make his $2.75 million annual salary possible.

Leach always says he does not want to use injuries as an excuse, but he did say the Cougars “had some understandable distractions” this week. Presumably, he was referring to considerable public and media focus on the playing status of Falk, all of which Leach could have prevented by going public with the news he gave Bender Sunday.

Oh well. As superbly as Falk has played this season, it’s doubtful he could have made a 35-point difference, though Bender did throw a pair of second-half interceptions that were returned for touchdowns. The Huskies’ impressive young defense also returned a fumble for an interception in the final half.

“He started off pretty good, but as we collapsed as a team, he collapsed.”

And the offense as a whole?

And the special teams?

“I don’t really know if we blocked anybody on special teams today or not. I know we didn’t on kickoff returns. We’ve got to be tougher as a team.”

One of WSU’s toughest players, star WR Gabe Marks, left the game in the final minutes with an apparent leg injury after being tackled and landing awkwardly. Marks’ status for Washington State’s bowl game is uncertain. Ditto for the three other offensive starters who sat out, presumably with injuries: Falk, OT Joe Dahl and slot WR River Cracraft.

WSU’s depth has improved substantially during Leach’s four years, but no team can lose four players of that caliber without a negative impact. The worst of teams can continue to fight, however, and the Cougars went down meekly against their arch-rivals. The seven turnovers were a season high; the 10 points, 288 passing yards and 319 total yards were season lows; the five lost fumbles were one short of the school record.

The Huskies, meanwhile, tied school records by recovering five fumbles and returning two interceptions for touchdowns. Washington also recorded a third consecutive win over WSU. The Cougars have never – not once – won more than two in a row against the Huskies. That’s not easily done when you’ve played an opponent 108 times since 1900.

Allison and Bender both referred to the Huskies as “a great team.” That seems a bit overboard for a 6-6 squad that finished 4-5 in the Pac-12 Conference. Washington looked great on Saturday, but as Bender noted, “When you turn the ball over seven times, it’s hard to win.”