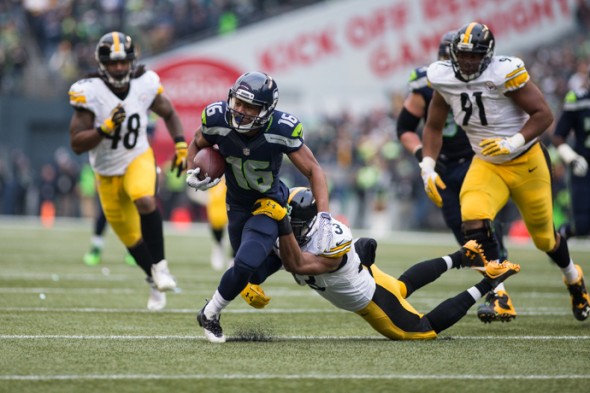 Tyler Lockett and the Seahawks escaped with a 39-30 win over Pittsburgh Sunday at CenturyLink Field. / Drew McKenzie, Sportspress Northwest

QB Russell Wilson matched the franchise record with five touchdown passes, including an 80-yard game clincher to WR Doug Baldwin with 2:01 remaining, as the Seahawks survived a massive Ben Roethlisberger-Markus Wheaton onslaught for a 39-30 victory Sunday at CenturyLink Field (box). The Seahawks (6-5) remain relevant for playoff contention after defeating a winning team for the first time this season.

Wilson threw three touchdowns to Baldwin and two more to WR Jermaine Kearse and needed every point because Roethlisberger carved up Seattle for 456 yards, an opponent franchise record. Wheaton caught caught nine passes for 201 yards, becoming only the second opponent receiver in 40 years to crack the 200-yard mark against the Seahawks.

As important as was Wilson’s career-best game, the Seahawks, tied for the NFC’s second wild card spot, had four interceptions, turning three into touchdowns. The last, by SS Kam Chancellor inside of a minute, dashed the remaining Pittsburgh hope.

The Seahawks did not win without significant cost: TE Jimmy Graham suffered a second-half tear to his patellar tendon under his right kneecap that will require surgery and end his season.

In a game of numerous significant plays, the most important occurred late in the fourth quarter. The Seahawks, up 32-30, faced 3rd-and-7 at their own 20-yard line. Wilson dropped a short pass to his right that Baldwin caught on the run on a shallow crossing pattern. Baldwin shook off two would-be tacklers, stiff-arming one, and raced home for the clincher.

Wilson’s five TD passes: 16, 30 and 80 yards to Baldwin and 12 and 9 yards to Kearse. The five TDs eclipsed Wilson’s career high of four against San Francisco Dec. 23, 2012 and Jacksonville Sept. 22, 2013, and tied the franchise record set six times, most recently by Matt Hasselbeck Sept. 24, 2006, against the New York Giants. Wilson’s 345 passing yards established a career high and his rating of 147.9 was his third above 100.0 this season and the second-highest of his career.

Baldwin’s three-TD game was the first of his career. The last time he caught two: Dec. 23, 2012 against San Francisco. Kearse caught multiple touchdown passes for the first time in his career.

Rookie RB Thomas Rawls, coming off a 209-yard rushing outing against San Francisco, had 81 yards on 21 carries and scored on a one-yard run in the third quarter.

Roethlisberger’s 456 yards broke by one yard the record against Seattle by Philip Rivers of San Diego Sept. 26, 2010. Wheaton became the first 200-yard receiver against the Seahawks since San Diego’s Wes Chandler posted 243 Sept. 15, 1985.

The Seahawks came up with four interceptions, by CB Jeremy Lane (playing in his first game of the season), CB Richard Sherman, DT Ahtyba Rubin and Chancellor. Sherman’s was his first of the season. He also picked off a two-point PAT attempt in the fourth quarter that does not count in interception statistics.

The Seahawks allowed three catches of 40 yards in the same game for the first time since 2008 — 69 and 41 yards to Wheaton and 40 to Martavis Bryant.

“It was man coverage and I threw it quick to him so he could catch it and run. Doug has been so clutch for us in so many ways.” —  Wilson, on his 80-yard TD throw to Baldwin

“We feel like we got a win over a very good football team. They (the Steelers) were on it today. They challenged us to the max, but we had what we needed to get it done. There were really a lot of exciting things that happened in this game. Russell played lights out and it took everything we had to win this game. Doug’s game was incredible. There were so many cool things that happened.”– Pete Carroll, Seahawks coach

“This is probably my all-time game. It wasn’t how we drew it up. Russell threw it kind of early, but he gave me a chance, and I was able to do what I was able to do. Russell gives us a chance every time he’s out there. When you get an opportunity in the open field like that ,you have to make the most of it.” — Baldwin

“The Dawgs got an Apple Cup win and we won. So everything is good. I felt like we really played well on offense. It’s about finishing games, and we did that.” —  Kearse

The Seahawks play their next two on the road, at Minnesota Sunday (10 a.m. PT, FOX)  and at Baltimore Dec. 13.