Record numbers for Wilson, Baldwin and the passing game covered for the absences of Lynch and Graham, and followed an earlier in-game scolding from Beast Mode, 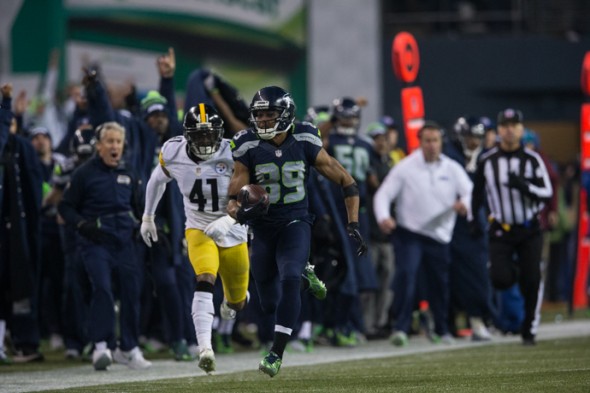 After one of the most wildly entertaining Sunday afternoons in the Pete Carroll era in Seattle, we learned that TE Jimmy Graham was lost for the season with a knee injury, QB Russell Wilson required three IV bags on the sidelines as he fought illness and QB Ben Roethlisberger was held out of the Steelers’ last series because of a possible concussion.

And you thought watching the game was draining.

As Carroll described it, “Golly, there was so much that happened.”

The most intriguing disclosure after the Seahawks Rocky Balboa-ed the Steelers 39-30  came from WR Doug Baldwin. It had nothing directly to do with his career highs in reception yards (145) and touchdown catches (three), nor the Red Cross casualty wagon, and everything to do with a player uninvolved in the action.

He said that during the 49ers game, RB Marshawn Lynch called the offense together on the sidelines and did something he had never done “in public,” Baldwin said. He chided  them.

“We hadn’t done anything offensively and we had just turned the ball over,” Baldwin said. “He told us we looked real unfamiliar. He didn’t recognize the offense. That really bothered me. (After the game) I went back and looked at the NFC Championship game (in 2014, a 23-17 win over the 49ers). We did look very unfamiliar.

“We had (a lot of) the same guys, and (new) guys like Jimmy Graham, and why are we looking so unfamiliar? He said other things I can’t repeat. But we had to get back to playing Seahawks football and having fun.”

Fun, judging by the frenzy among the record 69,055 mostly standees at the Clink, has arrived. So has the familiar efficiency of the Seahawks offense in the 2013 season, albeit heavier in the air and lighter on the ground.

When the hollering subsided, the Seahawks glanced around to discover they were finally above .500 (or as Carroll put it, “Finally . . . FINALLY!”) at 6-5 by beating a team with a winning record for the first time in 2015, and in the past three games scoring 32, 29 and 39 points. Despite his case of the crud, Wilson had career highs in passing yards (345) and touchdown passes (five), no interceptions and two sacks, one on a run.

The uptick was a result of a consistently improving line and significant progress in Wilson’s play.

“You could see it in his eyes that he had that killer instinct — ‘I’m going to go out here and do what I’ve got to do,'” Baldwin said. “That’s Russell Wilson. Whenever his back is against the wall is when he plays his best. I wouldn’t count him out for anything.”

Even when sick? “He had the sniffles,” Baldwin said, smiling. “He was all right.”

That was apparent on third down, the game element that has been the pivot point of the season. They converted seven of 13 times, including five of third-and-10-yards or more.

“That’s crazy,” said Carroll, who a couple of weeks ago was mildly critical of Wilson’s inconsistency. “That was a fantastic job of the guys in protection, to give him a chance in those situations. It’s not just the throwing — the catching was great, and the run after catch.”

Receivers consistently slipped away from tacklers, and blocked well downfield for each other.

Over the past two games, Wilson has completed 45 of 59 pass attempts for 605 yards and eight TDs for a passer rating of 147.9, highest over any two-game span of his career.

Reliance on passing is not usually the Seahawks way, but helped fill the void of Lynch’s absence. Rookie Thomas Rawls remained credible with 81 yards in 21 carries, but nothing like what he did the previous week (209 yards). Besides, the Steelers’ pass defense was 27th in the NFL entering the game, and looked every bit of that.

All phases of the offense are going to have to pick up because Graham has been lost for the season. Following what may have been his best game as a Seahawk, particularly a 36-yard reception at the Pittsburgh one-yard line in which he out-rebounded shorter backs for the ball, Graham tore the patellar tendon under his right kneecap following an incompletion in the end zone. Carroll said the star acquisition of the off-season would have surgery soon.

“We’re going to miss the heck out of him,” Carroll said. “He was going to have a huge day today — if he was able to stay out there.”

Baldwin filled some of gap with the most productive day of his career. On the game-breaking, 80-yard TD pass with two minutes to go, Wilson and Baldwin saw man coverage on a third-and-seven passing situation that called for Baldwin to cross over the middle.

“I kept shaking my head like, ‘Russ, just give me a chance,'” Baldwin said. The ball came “as late as you possibly could imagine, but fortunately my hands were already low so I didn’t have far to go to catch it.”

After slipping past one defender, the 5-foot-9 Baldwin, never known as a power guy, jammed a stiff-arm into the final defender, dropping him to clear the way to the end zone and the biggest win of the season.

Asked if Lynch taught him the stiff-arm, Baldwin laughed.

“I don’t want to give him credit for that,” he said. “That’s the first time I’ve been able to get a stiff-arm like that since college. So it meant something to me.”

As it did to the Seahawks. Some throwback work by Baldwin, and some offense that finally looked familiar.