Ordinarily, allowing Big Ben to throw for an opponent-record 456 yards earns a chewing-out. But four interceptions helped make the Seahawks defense a key part of the celebration. 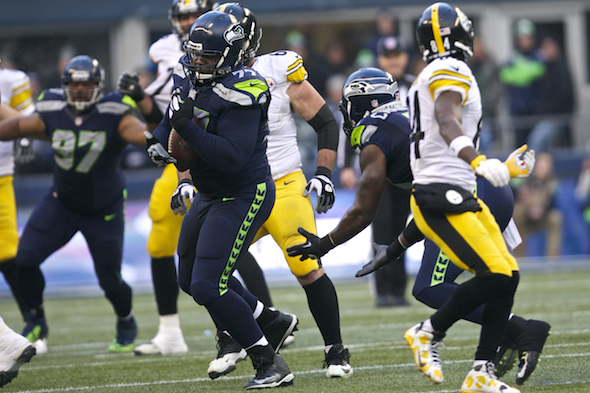 325-pound DT Ahtyba Rubin was one of four Seahawks to come away with an interception Sunday, as the Seahawks defense bent but didn’t break against the Steelers. / Drew Sellers, Sportspress Northwest

Who would have thought that a defense could give up more than 25 points and a record number in passing yardage and still play the deciding factor in the game? Sunday at the Clink, that defense belonged to the Seahawks, who nabbed four interceptions that led to 19 points as the Seahawks defeated the Pittsburgh Steelers, 39-30.

The defense had two Sisyphean tasks: Apply pressure to QB Ben Roethlisberger, and limit the threat of Pittsburgh’s receiving corps. Both were game-long, brutal chores — the Steelers threw on 59 of 73 plays.

Roethlisberger fired relentlessly, but finished the game before his teammates did.  The quarterback completed 36 of 55 passes for 456 yards, most by an opponent in Seahawks history. The end zone eluded him, however. Roethlisberger threw a 69-yard touchdown pass to Markus Wheaton in the fourth quarter, but did not finish the game after a blow to the head.

The hit that likely jarred Roethlisberger was delivered by DE Michael Bennett during the Steelers’ penultimate drive in the fourth quarter. Bennett was assessed a 15-yard penalty for roughing the passer and Roethlisberger finished the drive, but did not return.

Bennett said Roethlisberger was a handful.

“He’s a big guy, but he didn’t finish the game,” said Bennett. “You’re playing against one of the best quarterbacks in the NFL. They’re going to make big plays.”

Calling Roethlisberger one of the greatest quarterbacks of all time, Bennett went on to say that the defensive line’s plan was to make him hurry his throws.

Pittsburgh’s first errant throw, though, came from backup QB Landry Jones’ hands, not Big Ben’s. After a quick shift out of field goal formation in the first quarter on fourth-and-short at the Seattle 27-yard line, Jones rolled to his right, then threw back across the field, leaving a pass high for tackle-eligible Alejandro Villanueva. CB Jeremy Lane leaped up and grabbed the ball, racing the other way for a 54-yard return before stumbling to the turf.

Lane said the pick was a personal triumph in his first game in nine months following two injuries in the same play in the Super Bowl after making his first career interception.

“I saw (Steelers receivers) going to the flats and the quarterback looking my way, and I just jumped it,” said Lane. “If this wasn’t my first game back, I was going to crib that. Touchdown. Pick six. But my legs just died and I fell. It was something I’ve never experienced before.”

The grab led to Seattle’s first score, providing important momentum to an offense that flailed early.

The second interception came in unexpected fashion in the third quarter. On the second play of a drive in his own territory, Roethlisberger let slip an uncharacteristic wounded duck that plopped into the hands of DT Ahtyba Rubin. The ensuing drive led to another Seattle touchdown.

Sherman’s pick was his first of the season, and set up another touchdown for Seattle.

The final interception was again served up by Jones, after Roethlisberger left the game trailing by the final score. SS Kam Chancellor jumped up and grabbed a deep pass intended for WR Martavis Bryant, landing in-bounds and extinguishing the Steelers’ final chance.

Coach Pete Carroll said that the interceptions were a return to form for his defense, despite the numbers put up by the Steelers.

“To get those yards, they had to put it up and take some chances and our guys came through with the big plays that( we‘ve) just been missing,” he said. “It gave us opportunities for field position and stopped some drives and momentum.”

As important as the interceptions was Seattle’s third-down defense. The Steelers went 5-for-11 on third down, yet were twice forced to settle for field goals inside Seattle’s 10-yard line. Between those shortfalls and the fake field goal misadventure, the Steelers left a lot of points on the table.

The four picks doubled the Seahawks season total, which tied for last in the league. But Sherman said that those numbers didn’t concern the secondary.

“We don’t really worry about it because we know,” said Sherman. “We know, we’ve played this game long enough to now they come in bunches . . . that’s just how it goes sometimes.”

Having to wait until week 12 must have been frustrating, and giving up 538 total yards definitely leaves plenty to improve upon, but the defense emerged triumphant from its battle with Big Ben and his deep-threat wideouts.

The Legion of Resume finally mght have things going its way.