Despite a record-setting effort Sunday from the Steelers’ Ben Roethlisberger, the Seahawks coach believes it was a one-off that was not indicative of a failing defense. 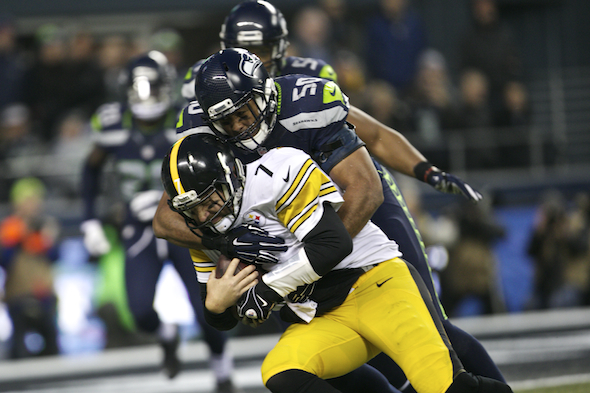 The 6-5 Seahawks reside this week in the sixth and final NFC playoff spot, but it doesn’t feel as if they are in command at the bridge. It feels like they’re pulling themselves back aboard a dingy that nearly turtled in heavy seas.

A big wave named Ben Roethlisberger poured 456 passing yards over the Seahawks Sunday at home, most by an opponent in the franchise’s 40 years. The Seahawks still beat the Steelers, 39-30, but the locals figure to be damp and shivering, and in no mood to crow about their sailing prowess.

Coach Pete Carroll, however, saw a squall where others saw a hurricane.

“You guys forget how many yards (Broncos QB Peyton Manning) threw in the Super Bowl,” Carroll said at his presser Monday. Well, no, actually, it was 279 yards, nothing close to the torrent by Big Ben. And the Broncos were were down almost before “the home of the brave” concluded, and stayed there.

But Carroll kept to his course.

“We’ve had a lot of yards thrown on us at times by guys who are committed to throwing,” he said. “This doesn’t seem like such a crazy deal to me. Ben was great. His receivers were fantastic. We made some mistakes that gave them some chances that we think we’ll eliminate.

“I don’t think it feels that much different. There’s a lot of concern around — that was a big game we went through, monstrous output by Ben. But I really think that was that game. None of that factors in (to a changed Seahawks scene). It really doesn’t.”

OK, then. Seahawks fans should free free to dry their drawers and carry on.

He’s certainly safe in having that claim untested this week. The Seahawks play at Minnesota Sunday, where the Vikings are a surprising 8-3 and leading the NFC North. But they are much like the Seahawks in preferring to run the ball, in their case behind the relentless Adrian Peterson.

The Vikings are tops in the NFL in rushing (146 yards per game), just ahead of Seattle’s 144. But the Vikings are no threat to out-Ben Ben. Second-year QB Teddy Bridgewater has the passing game 31st in total yards, whereas the Seahawks are 21st.

In fact, until the regular season finale Jan. 3 at Arizona, the remaining Seahawks opponents — at Baltimore, home for Cleveland and St. Louis — all have offenses in varying degrees of decrepitude.

So it isn’t likely that the veracity of Carroll’s position will be tested until the rematch with the Cardinals’ QB Carson Palmer (363 yards passing in a 39-32 win at the Clink Nov. 15). Even then, the possibility of a playoff-meaningless game for division-leading Arizona may cause Palmer to be rested.

Four Seattle interceptions Sunday, plus a ridiculous play call by Steelers coach Mike Tomlin — a fake field goal pass play by the backup quarterback to a 300-pound tackle — salvaged the day. Nevertheless, Carroll sounded as if he was kidding himself about Seattle’s decline on defense.

FS Earl Thomas, who had one of his worst games as a Seahawk, was closer to an honest assessment.

“At times, we weren’t clicking,” he said. “We had some bonehead plays.

“I really go out there and just play free. You’re going to mess up anyway.”

No, not really. Being assignment-correct is a Carroll coaching staple. The Seahawks were beaten underneath quite a bit, which they expected, but were burned over the top early in the fourth quarter on a 69-yard touchdown pass to Markus Wheaton when Thomas bit on a Roethlisberger rollout and abandoned coverage, then corrected too late.

The Seahawks have fallen to sixth in total defense at 325 yards a game and are tied for 15th in yards per passing attempt (7.2). In the fourth quarter against the Steelers, the defense gave up nine points, eight first downs and 185 yards.

That’s a Fernando Rodney-style close. Unlike the Mariners, however, the Seahawks Sunday had an offense to bail them out.

Thanks to an unpredictably manageable schedule, the Seahawks defense likely will not be tested again as they were Sunday — until the playoffs. To repeat: The playoffs.

Which is the time when no one remembers Thanksgiving-weekend storms.

Graham “absolutely” will return next season

Despite media speculation that TE Jimmy Graham’s season-ending patellar tendon rupture may be career-threatening, Carroll said he expects him back next season, although he had no fresh health news nor date for surgery.

“Absolutely,” Carroll said Graham’s ability to go next season. “There’s plenty of time for him to get back.”

Luke Willson and Cooper Helfet will move up a notch at tight end, and Carroll hinted they may add another player this week.

Health updates: FB Will Tukuafu and DE Demarcus Dobbs are in the concussion protocol; CB Marcus Burley has a minor ankle sprain and Carroll was “surprised” that LB Bruce Irvin’s sore knee allowed him to play Sunday . . . WR Paul Richardson has “a great shot” to play after recovering from a sore hamstring  . . . DT Jordan Hill came out of the game Sunday with a sore toe and is uncertain . . . RB Marshawn Lynch remains in Philadelphia following hernia surgery and has had no setbacks, but there is no date for his return to Seattle . . . Carroll was pleased to learn interim coach Clay Helton was given the permanent job at USC, where Steve Sarkisian was fired in September. “I think it’s a great choice in so many ways,” he said. “I’m fired up for everybody down there. He’s done a really good job. He has a way about him with his players. Instead of the transition that would take place with a big changeover, I think they’re going to be able to really take advantage of this.”