Sounders’ Neagle may be bound for D.C.

After a seven-goal season that was nonetheless riddled with frustrations for the midfielder, reports are that Lamar Neagle will be dealt to D.C. United during the winter transfer window. 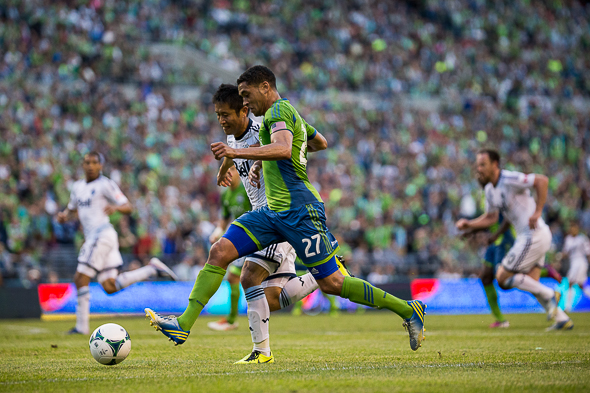 Lamar Neagle has played his last game as a Sounder, according to reports. / Drew McKenzie, Sportspress Northwest

Reports are circulating that Sounders midfielder Lamar Neagle will be traded to D.C. United, according to MLSsoccer.com’s Pablo Maurer. Neagle, who scored seven goals the past season across all competitions, seemingly fell out of favor with the organization after a poor run of form, failing to make the 18-man roster for Seattle’s Western Conference semifinal matches against FC Dallas.

The story surfaced in an unusual fashion. Mike Standish, a worker at an advertising agency based in Seattle, reportedly spoke with Neagle’s father-in-law while the latter was driving a forklift Saturday morning in Seattle’s Georgetown neighborhood.

Just ran into a man who said the Sounders traded his son-in-law, Lamar Neagle, to DC United last week. #ebfg

Allegedly, Standish was told that Neagle was “pissed” that he had been traded to D.C. United. Neagle, born in Tacoma, was a star at Thomas Jefferson High School in Federal way.

The club declined to comment, but did say that it expected to release a roster statement regarding players in “the next few days.”

The move makes sense from D.C.’s perspective. The Red and Black may be preparing to trade Chris Pontius, who fulfills a role similar to Neagle, to the Philadelphia Union during the transfer window.

While the trade window is not yet officially open, it is likely that perceptions of under-performance from Neagle, combined with his relatively high salary (a minimum of $165,000 annually) will spell an end to the 28-year-old’s time with the Sounders.