A converted defensive tackle, Drew Nowak started seven of Seattle’s first eight games at center, But he was inactive for the past three games, beaten out by Patrick Lewis. 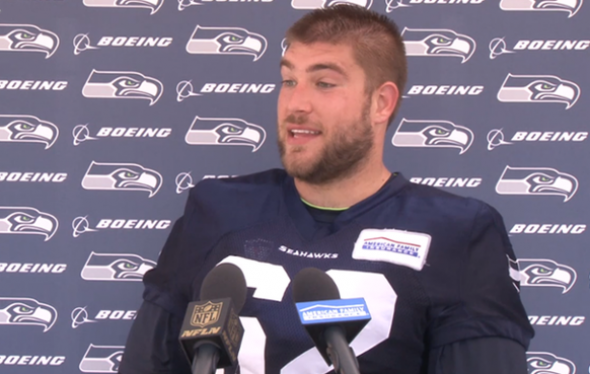 The Seahawks Tuesday released former starting center Drew Nowak, among a myriad of  moves in advance of Sunday’s NFC showdown against the Minnesota Vikings. Nowak started seven of Seattle’s first eight games this season during a period in which the offensive line was heavily criticized and quarterback Russell Wilson was on a near-record pace for times sacked.

Patrick Lewis, also an undrafted free agent like Nowak, took over at center and drew praise from coach Pete Carroll  as being a factor in the offensive improvement the past three games.

“I think he has been a factor, I guess because it’s the most obvious thing that’s really changed,” he said Monday. “I don’t mind giving him credit for that. In general, it’s been a process of growth for the whole group. I think a lot of guys can go in there and fill in right now, and we could pop guys into the lineup if we had to.

“There was a concern back last year, might have been the second Arizona game when we thought he might have been struggling a little bit with the communications. We wondered if that was going to be an issue going into this year, and that’s not an issue. That’s an area that he’s really improved at, and we have a lot of confidence in him.”

A converted defensive tackle from Western Michigan, Nowak signed on to Seattle’s practice squad Sept. 3, 2014 and won the starting job in training camp after veteran Max Unger departed for New Orleans in a trade for TE Jimmy Graham. Nowak’s transition to center ultimately didn’t work, and he was inactive for Seattle’s past three games.

Lemuel Jeanpierre was re-signed at midseason as a backup at center and guard, and his versatility contributed to Nowak’s departure.

Coffman was drafted in the third round (98th overall), by the Cincinnati Bengals in the 2009 draft. He has spent time with Tampa Bay, Atlanta and Tennessee, playing in 36 games. Coffman, signed because of Graham’s season-ending knee injury, has 14 catches for 148 yards and one touchdown in his career. The Titans released him Oct. 31.

Foxx spent time with the Seahawks in training camp, but was released Aug. 31. Hamilton returns after being released from the practice squad Nov. 26. Warmsley signed November 28.