The Mariners made a series of roster moves Wednesday that new GM Jerry Dipoto believes gives the club added depth and financial flexibility. 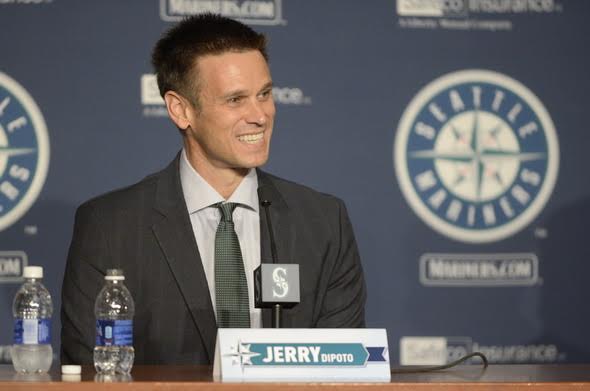 The Mariners Wednesday completed a flurry of moves, none major, that general manager Jerry Dipoto said gives the club more depth and added financial flexibility in advance of the winter meetings later this week in Nashville. On a busy day, as Dipoto continued to revamp a roster that dramatically failed to perform up to expectations in 2015, the Mariners made the following moves:

“Patrick turned out to be a nice pro prospect,” Dipoto said of Kivlehan. “It was a trade we didn’t salivate over, but we weren’t going to get Leonys Martin and Anthony Bass for free.”

“Mark was not an ideal fit for us on our roster,” Dipoto said of Trumbo, who was scheduled to make $9 million and was traded in large part to give the Mariners financial flexibility. “I explained that to Mark.”

The Trumbo trade leaves the Mariners with only one first basemen, Jesus Montero, who has yet to succeed at the major league level.

“Jesus Montero, who is coming off an excellent AAA season, has yet to establish himself as a major league player,” said Dipoto. “He has yet to turn the corner. But if the season started today, he would be our first baseman. Now it’s his time to show what he can do as a big leaguer, whether it’s here or elsewhere. (Andy) Wilkins has proven his abilities in AAA. He could pair with Jesus, but we’ll continue to add.”

The Mariners added Clevenger to serve as a backup to veteran Chris Iannetta, a free agent acquired recently from the Angels.

“This allows us to send Mike Zunino back to Tacoma,” said Dipoto. “The possibility exists that we carry three catchers, and we continue to count Zunino as a very important guy. But we had  to make some sort of adjustment due to last season (when Zunino hit .174). We had to make a move until Zunino is ready to be here. I think we started off with a significant weakness at that position and have turned it into a strength.”

De Fratus, 28, has spent his entire career in the Philadelphia Phillies organization, drafted in the 11th round out of Ventura College (CA) in 2007.

“De Fratus has been a performer throughout his minor league career,” said Dipoto. “He’s coming off a down year, but we pick up three years of control on him. If we can get him back he could be a benefit for us. I feel very good about getting a 28-year-old rebound candidate.

“We also feel good about the way the roster has ended up today. There will be further changes. We need work at first base, our bullpen, and adding a starting pitcher is a priority for us. But I’m glad we’ve been able to get roster flexibility this early in the process.”