A change in personnel, and growth during the season, suddenly have made the Seahawks offense sufficiently formidable that Earl Thomas hopes the defense can keep up its end. 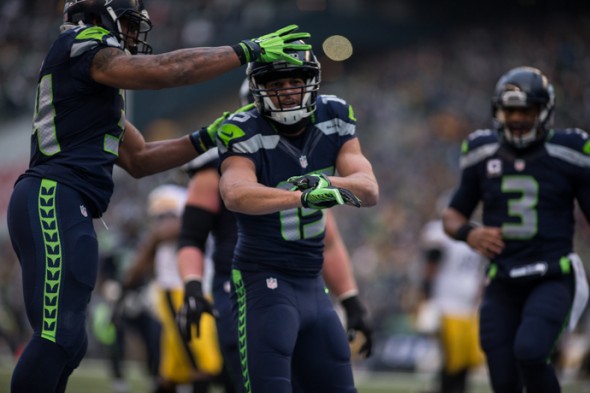 The coming-out party Sunday for the offense included WR Jermaine Kearse, who caught two touchdown passes in the 39-30 win over the Steelers. / Drew McKenzie, Sportspress Northwest

Normally, anyone using the word “funnest” would receive from me the Vulcan shoulder pinch that drops the fool to his feet. But coming from Tom Cable, onetime Snohomish High School football star and now Seahawks assistant coach in charge of the offensive line, I was willing to indulge some outlaw grammar.

It was worth it.

“This is one of funnest things I’ve got to watch develop in my career — a group of offensive players collectively taking on this responsibility,” he said this week. “All that crap about blaming this guy here or that group there. That’s all BS.

So we took our hats off. It was funnest.

It’s the Seahawks’ first game since the offense unveiled a wallop, fracturing more than grammar. In beating the Pittsburgh Steelers 39-30, the one-time woebegone outfit  produced five touchdown passes, which was a personal record for QB Russell Wilson that helped him win NFC player of the week honors.

More remarkably, the deeds were done with no help from RB Marshawn Lynch and a partial game from TE Jimmy Graham. Two of the top three highest-paid offensive players are injured and done for the season, yet things in 2015 have not looked so good.

The reason is the five anonymous grunts up front finally have their stuff together. Just in time.

At one point on a pace to set a single-season record for sacks allowed, the offensive line against the Steelers was sufficiently stout to permit Wilson to stand semi-tall (it’s the best he can do) in the pocket and throw with the accuracy that one extra second can provide.

That is why Cable is doffing his chapeau to linemen Russell Okung, Justin Britt, Patrick Lewis, J.R. Sweezy and Garry Gilliam (just in case you wanted something more than “the line”).

Blocks by backs and receivers deserve some credit, as do the glue-hands of the pass-catchers. It also helped to deploy an up-tempo version of the offense.

“I think a few weeks ago, I said we were taking sacks at an alarming rate,” said offensive coordinator Darrell Bevell. “That would definitely be an impetus for (up- tempo).”

The collective outcome is that Wilson throwing fast, deep and well from the pocket, no longer running at the sound of the first thud against one of his blockers. The transformation is noticeable on an emotional, as well as statistical, level.

“They play with a lot of fire,” said Earl Thomas, the Seahawks’ All-Pro free safety. “Sweezy comes off the field and you could see it in his eyes. He looked at me and was like, ‘You better get the ball back.’

“They want the ball. They’re very hungry. You can see Russ; he’s in the zone, so we’ve got to hold up on our end. We’re up to the challenge.”

You read that properly, longtime Seahawks fans. The defense, once the locomotive, now feels an obligation to keep up with the caboose.

An obvious reason for the uptick is the change at center, Lewis for rookie Drew Nowak. In thinking Nowak could change from a defensive lineman in college to a starting center in the pros in one season was a serious over-reach. Far easier was to teach Lewis, a shy third-year pro from Texas A&M, to speak up.

“He was kind of quiet and didn’t assume the responsibility to be verbal and to really reach out,” said coach Pete Carroll. “He’s communicating really well. He’s really taking command of the line of scrimmage.

“Tom pointed out to him that that’s what was holding him back. We always thought he had the potential. We didn’t know if he would tap into it.”

The result of the change in people and plays is that Wilson, finally, has developed some trust.

“We didn’t start off the way that we wanted to,” he said. “But as a collective group we’ve really put together a set of games in a row where, up front, they’re doing a phenomenal job.

“We believe in those guys. I know I do.”

Right on time, too. Carroll’s belief in playing young players early in their careers has some obvious negatives, but the positive is described by one word: December.

Since he arrived in Seattle for the 2010 season, Carroll has a 17-7 mark in December, and 7-3 in the postseason. That includes his first-year mark of 2-3 when he was still dealing with the leftovers from the Holmgren/Mora regimes.

Carroll speaks often about finishing. The notion is not confined to fourth quarters.

“The goal is to get to December with a chance,” Wilson said. “We have a chance.”

As the Christmas carol goes, it’s the most funnest time of the year.