Over 40 seasons, the Seahawks have defeated an eight-win team on the road only eight times. They face 8-3 Minnesota Sunday in the Twin Cities. 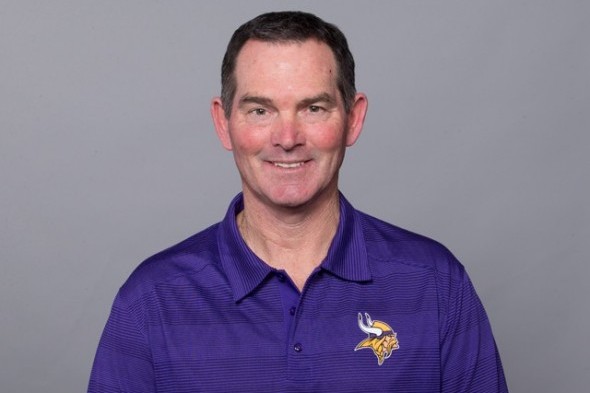 Former Washington State assistant Mike Zimmer has the Vikings at 8-3.

Even though the Minnesota Vikings lead the NFC North with an 8-3 record, feature pro football’s most productive back in Adrian Peterson, and will be playing at home, they opened as a one-point underdog to the Seahawks. Seattle has defeated only one team  (Pittsburgh) with a winning record and is missing two keys to their offense, RB Marshawn Lynch and TE Jimmy Graham.

That either doesn’t say much for Minnesota, or it’s an acknowledgement that the Seahawks, laggards most of the season, are finally hitting their stride. Certainly Seattle’s offensive line, the team’s weak point from training camp through Thanksgiving, has made improvements, illustrated best by the fact that QB Russell Wilson helped put 39 points on the Steelers Sunday.

At the same time, Seattle’ defense isn’t what it used to be. It faces a second-year quarterback in Teddy Bridgewater, who has won seven of his past eight home games, including four with a 100.0+ passer rating.

“What I’ve tried to do here is build an organization and an environment that constitutes winning,” said Vikings head coach Mike Zimmer, who served as defensive coordinator at Washington State under Mike Price from 1989-93. “We try to play smart football, we try to play understanding the quick situations of the game. I never go into a season saying we’ll be 8-3 or we’ll be 3-8. I just try to get our team to play the very best they can each Sunday.”

Not much separation. But there is this: In 40 years spanning more than 300 games, the Seahawks have won only eight times on the road against an opponent that had eight or more. But three have come in the Pete Carroll era.

Last year, the Seahawks did it twice. On Dec. 2, they traveled to Philadelphia and beat the 9-3 Eagles 24-14. Lynch chewed clock after the Seahawks went ahead 17-7. Three weeks later, the Seahawks won at Arizona 35-9 against the 11-3 but injury-compromised Cardinals, who used third-stringer Ryan Lindley at quarterback. The Seahawks swallowed Lindley, holding him to a 47.2 passer rating.

Only six other times did the Seahawks beat an eight-plus win team on the road. These are the eight, listed chronologically:

When the Seahawks faced the Vikings Nov. 4, 2012 at CenturyLink Field, they won 30-20, overcoming 182 rushing yards and two touchdowns by Adrian Peterson. No opponent runner has gained more yards against the Seahawks during the Carroll era (since 2010). The first 74 of Peterson’s 182 came on the game’s second play, when he busted one to the Seattle one-yard line, where he was brought down by Brandon Browner.

But the Seahawks won because they took a Russell Wilson-orchestrated 27-17 lead and reduced Peterson to a spectator in the fourth quarter, as the Vikings went to the air to attempt to get back in the game. Lynch ran for 124 yards, gobbling clock and keeping Peterson on the bench. Peterson had five carries in the second half while Lynch had 15.

In 2013 at the Clink (the Seahawks haven’t played in Minnesota since 2009), the Seahawks again shot out to a fast start, including a 58-yard return of the opening kickoff by former Viking Percy Harvin, to win 41-20. Petersen had only 65 yards in 21 carries, again marginalized because the Vikes played from behind with underachieving QB Christian Ponder.

The Seahawks came close to such an audacious play. In the past 20 years, they have been officially credited with one Hail Mary win, even though the play is forever known as the “Fail Mary.” Russell Wilson’s 24-yard pass to WR Golden Tate at CenturyLink Field Sept. 24, 2012, which Tate really didn’t catch, but received credit for doing so, gave Seattle a 14-12 win and helped bring an end to the referees strike four days later.

The Seahawks won only two other games in the past two decades with a touchdown pass in the final minute of regulation:

The Wilson-to-Tate TD came on the game’s final play and thus is Seattle’s only Hail Mary win. The Raiders went 3-and-out after John Kitna’s TD to Darrell Jackson, and then Kitna took a knee. The Panthers ran seven plays, couldn’t score and Wilson took a knee.