In what was predicted to be a low-scoring game, the Seahawks erupted offensively and dominated the Minnesota Vikings 38-7 Sunday in the Twin Cities. 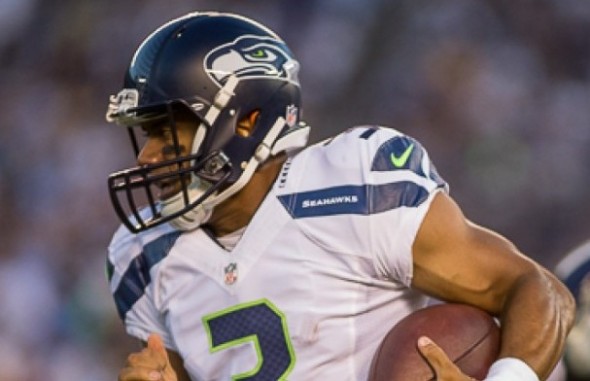 One stat and two plays best summarize the Seahawks’ 38-7 thumping of the Minnesota Vikings Sunday in the Twin Cities. The stat: QB Russell Wilson outrushed RB Adrian Peterson (51 yards to 18). The plays: The next play after Wilson had a 53-yard touchdown run called back due to a holding penalty on TE Luke Willson, he flipped a 53-yard touchdown pass to WR Doug Baldwin. Seattle has not had it so easy in a regular-season game since crushing Arizona 58-0 three years ago (box).

The Seahawks didn’t gain ground on Arizona in the NFC West (the Cardinals easily disposed of the Rams 27-3), but improved to 7-5 with a third consecutive victory, a first this season. Seattle not only beat a second consecutive opponent with a winning record, it did so against the NFC North leaders (now 8-4).

With Seattle leading 14-0 with slightly more than a minute to play in the first half, Minnesota QB Teddy Bridgewater overthrew his receiver. FS Earl Thomas intercepted the pass and returned it 25 yards, with another 15 yards on a penalty setting up Wilson’s 20-yard TD pass to Doug Baldwin. Not only did the Seahawks go up 21-0, the play ensured that Peterson, the NFL’s leading rusher, would not be a factor in the second half.

Wilson had his third outstanding performance in as many weeks, completing 21 of 27 passes for 274 yards, three touchdown passes and a rushing TD. He also had his third consecutive passer rating above 130, finishing at 146 (158.3 is perfect). That’s the third-highest rating of Wilson’s career, a week after his second highest, 147.9 vs. Pittsburgh. Wilson’s best: 151.5 vs. Minnesota two years ago.

Wilson threw TDs of 20 and 53 yards to Baldwin and one of five yards to RB Fred Jackson. Baldwin caught five passes for 94 yards. He has snagged five touchdown passes over the past two weeks. He had three in Seattle’s first 10 games.

Rookie RB Thomas Rawls ran for 101 yards — 5.3 yards per play — and a five-yard touchdown, his fourth 100-yard game of the season as he fills in for injured Marshawn Lynch.

Rookie WR Tyler Lockett, who had a kickoff return of 47 yards, had his best receiving game with a career-high seven catches for 90 yards. Lockett caught a pass every time Wilson targeted him.

Seattle’s 98-yard scoring drive in the second quarter, which concluded on Wilson’s eight-yard run, was its longest of the season, topping a 91-yarder against San Francisco (Nov. 22) and 90-yarders against Carolina (Oct. 18) and the 49ers.

The Vikings entered having allowed 17.6 points per game, but Seattle ran out to a 21-0 lead, its largest halftime margin since Week 9  last year.

The Seahawks not only held down Peterson, Minnesota had 94 passing yards and nine first downs. Seattle sacked Bridgewater four times and held him to a 55.4 passer rating.

Rookie DT Frank Clark had two sacks, the first multi-sack game of his career. He has three in his past two games. Michael Bennett and Bruce Irvin also registered sacks.

The interception by Thomas was his fourth of the season.

The Seahawks have scored 35.3 points per game over their past three after averaging 22.1 in their first nine . . . The Vikings sacked Wilson twice, neither of them consequential. Wilson has been taken down 39 times this season . . . Seattle is 7-5 in its last 12 10 a.m. kickoffs and 16-8 in its past 24 road games . . . The Seahawks lead the all-time series with Minnesota 9-5 and have won the past three in the series . . . Wilson has 43 regular-season wins and 93 career touchdown passes, 21 this season (he threw 20 last year). He has not thrown an interception since Nov. 15. His rushing TD was his first of the season.