After giving the Vikings the third-worst home beating in franchise history, the Seahawks have cleared a direct path to the playoffs through December, their annual party month. 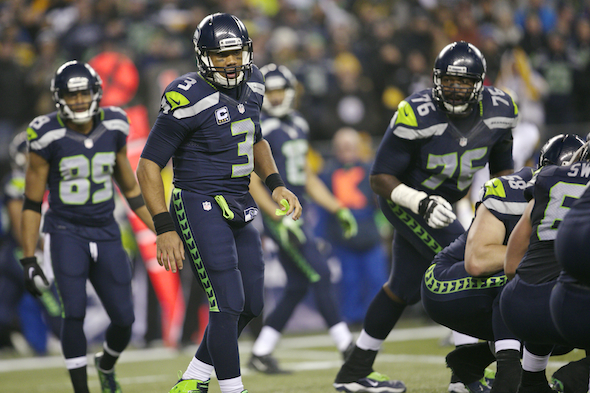 The Seahawks offense had three touchdown drives of 80 or more yards against the Vikings. / Drew Sellers, Sportspress Northwest file

In another time, it might have been called an acid flashback. Sunday in Minneapolis, the Seahawks saw their 2013 season return in all its psychedelic glory. But the only people who had minds altered were the NFC North-leading Minnesota Vikings — and perhaps many others around the NFL looking at potential postseason matchups.

Football bad-assery has returned to the Northwest.

What does that mean? Let Minnesota RB Adrian Peterson, the NFL’s leading rusher, explain it after the 38-7 destruction: “They were more aggressive, more physical, and they out-coached us as well.”

Sounds like the team the football world has come to know in December — the Seahawks are 18-7 under coach Pete Carroll after Dec. 1. The defeat was the Vikings’ most lopsided at home since a 34-3 defeat by Chicago in 1984, and third-worst in team history.

The Seahawks did Sunday what they often did in the 2013 season, which ended in a Super Bowl triumph — go on the road and dominate a good opponent in all phases.

“As a group, I don’t think we can play too much better,” said QB Russell Wilson, a statement that was as accurate as it was exuberant. The Seahawks, who had three TD drives of 80 or more yards, outgained the Vikings 433 yards to 125, converted 10 of 14 third and fourth downs (the Vikings were two of 11),  had good special-teams returns and held Peterson to 18 yards.

All of this mayhem was committed without two of the three best offensive players on the team — RB Marshawn Lynch and TE Jimmy Graham. Not needed.

Over the past three games, the Seahawks, owing largely to an offensive line that has grown into its job of protecting Wilson, have outscored opponents by a combined 104-50. The defense, battered a week earlier by 480 passing yards and 30 points in a home win over the Steelers, responded with a shutout, the scoreboard zero marred only by a 101-yard kickoff return for a touchdown by Cordarrelle Patterson.

“Really a complete victory, really thrilled with that,” Carroll said. “We played well from start to finish.

“I don’t know how we could have expected to hold them down like that. And we were able to run it down their throats. It was a huge day for us.”

The outcome wasn’t that surprising. The Seahawks under Carroll almost always have been firm against the run. As the Steelers game showed, they are much more vulnerable to a short passing game. But second-year QB Teddy Bridgewater is no Ben Roethlisberger, nor Carson Palmer.

The Seahawks ganged up on Peterson and dared Bridgewater to throw. He couldn’t handle it, completing only one pass of more than 18 yards and finishing with 118 yards overall on 17 of 28 passing.

The Seahawks under Carroll have met the Vikings three times (2012, 2013 and 2015) with Peterson in the backfield, and won all three by a combined score of 109-47.  Besides one breakaway of 74 yards in 2012, Peterson has gained 201 yards on 46 carries. As long as the Vikings don’t have a top-tier quarterback, Peterson can be nearly shut down.

One-dimensional teams, even at 8-3, have little shot against the Seahawks defense. The next three opponents, the Baltimore Ravens (4-8), Cleveland Browns (2-10) and St. Louis Rams (4-8), have nearly zero dimension on offense, with all down to second- or third-string QBs.

With four games to go, the Seahawks are 7-5 and alone in the sixth and final NFC playoff spot, after Tampa Bay beat Atlanta Sunday to make both teams 6-6. Only four NFC teams have better records than Seattle: Carolina 12-0, Arizona 10-2, Green Bay and Minnesota, both 8-4. The sixth and final playoff team will be the champion of the woebegone NFC East, which may not produce a .500 record.

The Seahawks will be heavily favored in each of next three games. A six-game winning streak will put them at 10-5 heading into the final regular-season game Jan. 3 at Arizona. The Cardinals could well have the NFC West clinched by then, meaning that they could choose to rest their top players, such as Palmer.

So even if the division title is out of reach, making the playoffs, given the schedule, now is likely for the Seahawks.

Entering as a wild card is a more perilous route than the past two years — no first-round bye and likely all road games, if they are so fortunate to keep winning — but the way the Seahawks have come together the past three weeks suggests that many things are possible.

That was evident in the diverse playcalling from much-criticized offensive coordinator Darrell Bevell, who kept the Vikings defense off-balance.

“We really were aggressive today,” Wilson said. “So many of us can make so many different plays.”

Best evidence came in the third quarter. The Vikings, who by then had lost to injury a key starter from the line, the linebackers and the secondary, were down 28-0 when Wilson kept the ball on a read option for a 53-yard TD.

But TE Luke Willson was flagged for a holding call on the run.

Undeterred, the Seahawks ran a play-fake followed by post route to Baldwin, who was wide open for a feathery throw from Wilson that hit him in stride for a “make-up” TD. Back to back scores from midfield that were from opposite parts of the playbook.

The key was giving Wilson the extra second of protection that he has needed to make the offense blossom.

“The protection is as good as we’ve seen it in a while,” Carroll said. “When you protect him, he’s tough to deal with.’’

Since it’s December, so are all of the Seahawks.