Cougars draw Sun Bowl, will have back QB Falk

The Cougars were hoping for a more prestigious bowl, but drew the Sun Bowl against a prestigious opponent, the Miami Hurricanes, Dec. 26 in El Paso,TX. 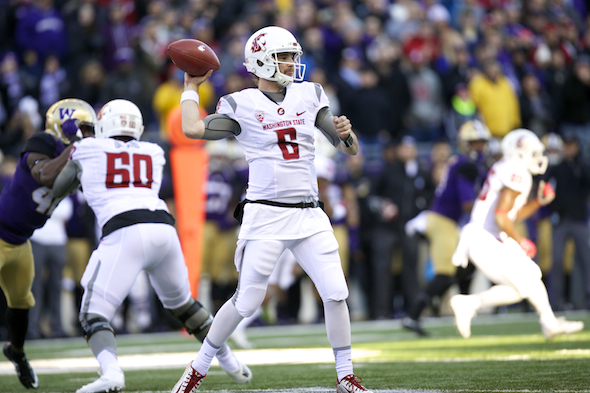 Peyton Bender, who started at QB in the Apple Cup, will give way to Luke Falk in the Sun Bowl. / Drew Sellers, Sportspress Northwest

First, the Cougars announced they will face the Miami Hurricanes in the Hyundai Sun Bowl Dec. 26 in El Paso, TX.  (11 a.m., CBS). WSU athletic director Bill Moos had more good news later in the day when he said star quarterback Luke Falk is expected to return to action after missing the Washington game with a head injury.

“It’s my understanding that we’re a green light with Luke, and barring any last-minute problems, he’ll be practicing when we resume practice here shortly,” Moos said.

Falk leads the Football Bowl Subdivision with 387.8 passing yards per game. Redshirt freshman Peyton Bender made his first college start against Washington and threw two interceptions and lost two fumbles in a 45-10 loss that knocked the Cougars out of the Top 25.

As is WSU, Miami of the Atlantic Coast Conference is unranked, 8-4 overall and finished third in its division. The Cougs finished 6-3 in the Pac-12 Conference, Miami 5-3 in the ACC. Both teams like to throw, although no other FBS team relies on the air game like Washington State.

Miami is 4-1 since interim coach Larry Scott replaced the fired Al Golden after a 58-0 loss to top-ranked Clemson in late October. The Hurricanes hired Mark Richt as their new head coach, but he will take over after Scott coaches in the bowl game. Scott’s job status after the bowl is uncertain.

WSU coach Mike Leach said he “doesn’t know a ton” about the Hurricanes. Scott said he’s well aware of WSU’s “wide-open offense. That’s something our kids will get excited about.”

The Hurricanes rank 27th nationally with 281.9 passing yards allowed per game. Miami averages 28.9 points for and 28.8 points against. The Cougars also allow 28.8, and average 32.4 points on offense.

The Cougars have become extremely secretive about injuries and other team matters since Leach took over as head coach in 2012. In addition to Falk, star offensive tackle Joe Dahl and key slot receiver River Cracraft have missed recent games, and leading receiver Gabe Marks was injured at Washington.

“I’m not going to say we’ll have our full arsenal, but maybe we could,” Moos said. “I haven’t stayed really on top of that.”

DraftInsider.net reported that Marks suffered a “significant” ankle injury that might prevent the redshirt junior from working out at full strength for NFL scouts. Thus, Marks would seem likely to miss the bowl game. The website said Marks “was ready to enter the draft,” but now is expected to return to WSU next season.

Officials from the Alamo Bowl in San Antonio and Holiday Bowl in San Diego had shown considerable interest in the Cougars.

“I thought during the week that the Alamo was probably out of reach,” Moos said, “but right up to the end thought we might have had a shot at the Holiday Bowl. But they instead chose to bring USC back” for a second year in a row.

The Cougars have added appeal in El Paso because Leach was a highly successful coach at Texas Tech from 2000-09.

“We’re really excited to come to El Paso and have the opportunity to play in the Sun Bowl,” Leach said. “It’s one of the oldest bowls. I’ve heard about it for decades.”

The Cougars are 6-5 all-time in bowls, including a Sun Bowl win over Purdue in 2001. Miami and WSU have never met in football. Former WSU coach Dennis Erickson won two national championships (one shared with Washington) after leaving the Cougars to coach Miami after the 1988 season.

The Cougars have been allotted 6,000 tickets. For ticket and flight information, including charters, phone (800) GO-COUGS or go to www.wsucougars.com.

Leach guided the 2013 Cougars to a New Mexico Bowl loss to Colorado State. Leach is the first WSU coach to take two teams to bowl games in his first four years as head coach.

*=Amount each school will receive