The surprising Portland Timbers scored the fastest goal in MLS Cup history and held on to beat Columbus on its home field to claim the Northwest’s first MLS championship. 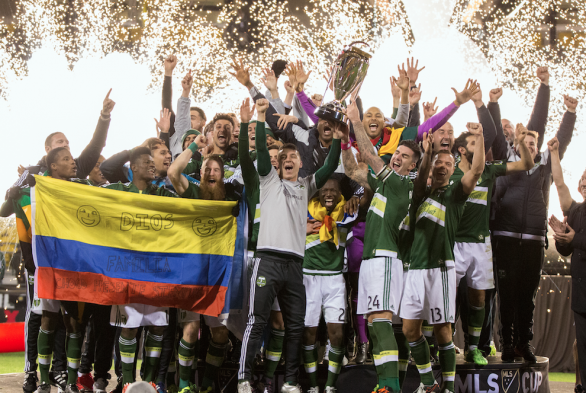 The Timbers celebrate their first MLS Cup after the win in Columbus over the Crew. / Augusto Saenz

COLUMBUS, OH. — The Portland Timbers came into Columbus and the MLS Cup as underdogs, but leave as champions, triumphing over the Columbus Crew 2-1, with goals from Diego Valeri and Rodney Wallace.

The Timbers found their dream start within 27 seconds of kickoff, when midfielder Valeri took advantage due to goalkeeper Steve Clark’s error. Valeri made a strong tackle on the keeper and the Timbers quickly found themselves up 1-0, to the disbelief of the Crew and their fans. Valeri’s score was the fastest in Cup history.

The Crew struggled to connect on passes early on, due to the Timbers’ high pressure on the midfield and defense. It led to a crucial turnover that the Timbers capitalized on in the seventh minute to make it 2-0.

Timbers midfielder Darlington Nagbe found winger Lucas Melano, who crossed it into the six-yard box. Wallace’s flying header put the ball in the back of the net.

Controversy couldn’t stay away from this title match, as replays showed that the ball won by Powell was actually a couple of feet out of bounds. Head ref Jair Marrufo let play continue.

Desperate, the Crew came alive and regained control of the game. They found chances in the first half and were rewarded.

In the 18th minute, the Crew found fullback Harrison Afful, who crossed it into the penalty area to striker Kei Kamara. The Timbers struggled to find a way to clear the ball during the scrum and Kamara finished it home.

The second half continued with the Crew dominating possession. However, finishing left them wanting. The were unable to find a shot on target in the second half. Portland took advantage of the Crew playing high, countering back whenever they found the chance. That led the Timbers to two huge opportunities that found the woodwork.

The first left the Crew scrambling on a corner, as the ball fell to Wallace, who had his shot saved by Clark. The clearance hit the crossbar before moving away. The second chance came on Timbers striker Fanendo Adi’s header off fullback Jorge Villafana’s cross. The shot hit the far post before hitting Clark, who fumbled the ball out of bounds.

As the final minutes of added time came and went and Marrufo blew the whistle, the Timbers rushed onto the field knowing that they had their first MLS Cup trophy — and first for the Northwest, ahead of their Cascadia rivals, the Seattle Sounders.

“I don’t think it has sunk in yet that there’s no next game,” Timbers coach Caleb Porter said.”We’re raising the trophy and we’re the best team in MLS this year.

“Every time people thought we were down and out, we’d pop up with a big result. The players deserve credit for that. That shows their character. We knew if we could get hot and start scoring goals that we had a very strong mentality in this team.”