The Seahawks defense turned in an afternoon that evoked the Super Bowl triumph over Denver, according to Pete Carroll. That news, plus more on Marshawn Lynch and Darrell Bevell. 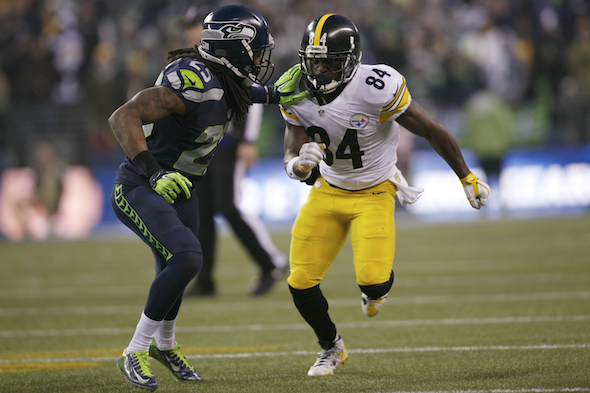 Seahawks CB Richard Sherman had his hands full with Antonio Brown and other Steelers receivers, but things changed against the Vikings. / Drew Sellers, Sportspress Northwest

The two-time-defending NFC champions have arrived at what seems to be their annual big-boy apex.

“The last couple weeks have felt very familiar,” Seahawks coach Pete Carroll said Monday, wiping away the last bits of lutefisk from the Vikings’ implosion Sunday in Minneapolis. “The approach the players have had the past three to four weeks is really similar to where we’ve been in past years. It feels good. The play is good.

“Every team in every sport is trying to figure this out. It feels like we’re on track to play really good football. I like the way it feels.”

No tool is available to detect the concussive blow that statement will have around the NFL, but the measurement is somewhere between a cringe and a weep. Bartenders: Just leave the bottle on the bar.

Remarkable as was the efficiency of the Seahawks offense in the 38-7 win, the defense executed a 180-degree turnaround from the previous week, when the Steelers passed for 480 yards in a harrowing 39-30 Seattle win. Steelers QB Ben Roethlisberger burned the defense underneath and over the top in an uncharacteristic dope-slapping.

Even though the Seahawks knew that Vikings QB Teddy Bridgewater was no threat to repeat, the blow by the Steelers prompted a change in practice last week: Complete devotion to fundamentals.

“We went back to fundamentals — we strictly did that,” he said. “That’s the technical part of breaking on the football — good pass-drops and stuff like that — to ensure that we weren’t giving up some loose areas in our zones.

“Guys did an excellent job — as good a job as we’ve done, probably all the way back to (the Super Bowl win over Denver), of driving on the football, making tackles, making hits in the open field, and the consistency of that.”

Invocation of the Valhalla moment of Seahawks football is not something Carroll does easily. He understands that the 43-8 obliteration of the Broncos was dominance that few teams in any sport will experience. But getting close to that level is a reasonable expectation this year, despite the turnover in personnel.

Fundamentals “are absolutely critical to our play and our style of how we play defense,” he said. “This was the best game that we’ve had. I think last week had an impact on it, everybody drawing back to basics.

“It’s an opportunity for every team to get better fundamentally as the season goes on. That doesn’t always happen. That happened (Sunday). You saw a shift in the tightness of our zone play, and the plays that the guys were making coming out of their zones. So that’s what happened.”

What the next three opponents — the Ravens on the road, and the Browns and Rams at home — have in common besides losing records is that their offenses are mostly decrepit. So the Seattle defense is unlikely to see a serious test. But they can aspire to a fundamental perfection.

As the old guys remembered what to do, one of the young guys supplied serious energy Sunday. Carroll was excited about the play of rookie DL Frank Clark, who had two sacks and two batted passes in his best game as a Seahawk.

“Whenever you have a guy that can run that fast and has all of that quickness, and the energy he brings — he does play really hard — that’s going to help,” he said. “We’ve been excited about Frank since we first saw him on the practice field.”

Clark saw his most extensive action, including spending more snaps inside at the backup tackle job normally played by Jordan Hill, who was out with a toe injury.

“It was kind of a new look for him,” Carroll said. “We do have an opportunity to move guys around for third-down purposes. He gives us flexibility.”

Clark has no notion of how it worked in Seattle the past two seasons. But he doesn’t have to — he has his elders for that. He needs merely to go fetch.

RB Marshawn Lynch has left Philadelphia, where he underwent surgery to fix a sports hernia, but Carroll said he hasn’t talked to his star running back, and doesn’t know where he is, except he’s not at team HQ.

“He’s at large,” said Carroll, who sometimes has had cool relations with Lynch. Doctors told the Seahawks that Beast Mode is doing “really well,” but Carroll toned down his previous rhetoric about Lynch’s possible return for the playoffs, which would be the weekend of Jan. 10-11.

“It’s so much to ask him to jump back after three weeks,” he said. “I don’t even know how you could think that way. This is week three.”

Bevell to BYU? News to Carroll

Offensive coordinator Darrell Bevell is rumored to be on the short list of candidates to replace head coach Bronco Mendenhall, who left Brigham Young University to take the football vacancy at the University of Virginia. It was news to Carroll Monday.

“I just heard that walking down the hall,”  he said. “Is the job open? I didn’t know that.”

Bevell, 45, has no previous connection to BYU, but he is a member of the LDS church, and  took a two-year mission while attending Wisconsin. His eldest daughter is attending Utah State in Logan and daughter No. 2 has accepted a softball scholarship to attend BYU. A third daughter is in elementary school.

Bevell has interviewed for head coaching vacancies in the NFL but has never been a head coach at any level. Carroll has always been a Bevell believer.

“He’s an excellent football coach,” Carroll said. “He can run the whole thing. I haven’t talked to him about it. But he’s a fantastic head coaching candidate, no question.”