Thiel: Ravens, 49ers and the fall from NFL grace

The Seahawks play in Baltimore a Ravens team broken from injuries and nowhere near where it was three years ago, when they won “The Harbaugh Bowl” championship over another since-broken team. 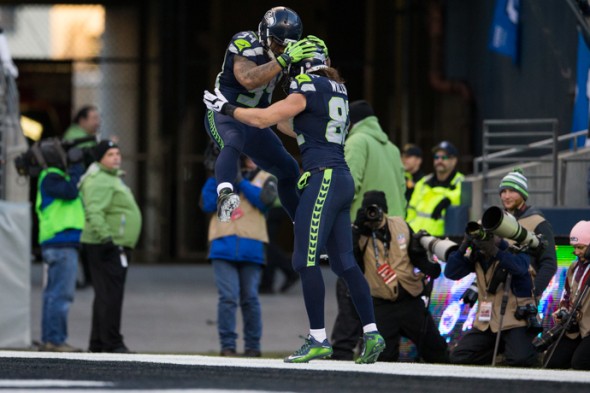 As Thomas Rawls and Luke Willson demonsrated against San Francisco, the party is again on for the Seahawks. The mystery is how long it can last. / Drew McKenzie, Sportspress Northwest

Quick: Which teams most recently played each other in the Super Bowl before the Seahawks in the past two?

If you said the Baltimore Ravens and San Francisco 49ers, you win a pair of $10 pleated khakis from Wal-Mart — If Jim Harbaugh hasn’t purchased the entire inventory.

Super Bowl XLVII was won in New Orleans by the Ravens, 34-31, in the immortal Harbaugh Bowl between coaching brothers Jim and John.

The subject merits attention this week, because the Seahawks play the Ravens in Baltimore, where John is trying to patch together his broken team three years gone from glory.

Jim, you may recall, saw his 49ers wreck even faster, going 8-8 the past season. Then he fled to his alma mater at Michigan, which gets to spend New Year’s Day at the Buffalo Wild Wings Citrus Bowl in Orlando against Florida.

Not a bad gig, especially compared to staying in his old job, which could have meant getting his team’s grill smashed twice a year by the Seahawks and his nemesis, the scoundrel Pete Carroll.

So it seemed reasonable to ask Carroll Wednesday what the two teams’ post-Super Bowl fates said about how quickly success can vanish in the NFL. He had a surprising answer.

It says “that Mr. and Mrs. (Jack) Harbaugh aren’t quite as fired up for their boys,” Carroll said. The media gathering erupted in laughter, and Carroll beamed. He was proud of his good-natured jab. He backed up and offered platitudes about Clan Harbaugh, trying to regain his speak-no-evil coaching decorum.

“So I don’t know what you asked me in the question, ” he said as the chuckles died down, “but that’s all I could think of.”

After the press conference, he walked by his questioner.

“You got it outta me,” he said, smiling, and kept walking. The twice-yearly What’s Your Deal? Bowl is gone, but it is not forgotten.

The disdain Carroll felt for Jim Harbaugh is not apparent with John, considered by many to be the sane brother in the royal family of football coaching. But it is John who remains in place, and who must come up with something to avoid being road kill for Seattle in the way the Vikings were last week in Minneapolis.

He must do it missing seven starters on offense from the lineup that began the season. That includes QB Joe Flacco, leading rusher Justin Forsett (who replaced the notorious Ray Rice) and leading receiver Steve Smith Jr., all injured.

In fact, the Ravens have 16 players on injured reserve, believed to be a league high.

“We’re pretty numb to it now,” WR Kamar Aiken told the Baltimore Sun. “It is what it is. We really haven’t had any time to sit back and really think about all the injuries or sit here and soak on them. We’re just taking it as it goes.”

The missing talent contributed to an agonizing season in which the eight Ravens losses have been by a total of 34 points. Several defeats also have included jaw-dropping decisions by officials that have gone against the Ravens on critical plays that they believe cost them games.

Every team has similar gripes with officiating. But the collection compromising the Ravens’ run of excellence — they have been to the playoffs in six of the previous seven years — is causing Harbaugh to lament that the league’s reputation is in jeopardy.

“The credibility of the league is at stake, in terms of the credibility of the game,” he said Wednesday in a teleconference with Seattle reporters. “It has to be at the highest level it can possibly be at. I have every confidence that they will pursue that in the off-season, and I’m hopeful that they’ll follow through with it.”

The unraveling of the 49ers is better known in Seattle. Jim Harbaugh and his assistants fled a dysfunctional organization run by a know-nothing, third-generation owner and his various flunkies, who watched as a series of arrests, retirements and injuries gutted a great team.

When success collapses in the NFL, it is often cruelly swift, abetted by a hard salary cap that forces teams to jettison quality players and backfill with lesser players.

“Success runs away from everybody,” said Seahawks DE Michael Bennett. “Success can do crazy things to you, go to your mind. Over time in the NFL, there’s so much transition, turnover on the roster. You lose so many good players through free agency, things aren’t the same. And there’s an injury rate of 100 percent.

“You’re used to seeing the Ravens win more games. That’s just how it goes in the NFL. Teams have their time periods. The Patriots are one of the teams that outlived (the annual problems). They’ve been on top a long time; Tom Brady went to the Super Bowl in 2003 and then last year.”

The Patriots’ consistency is the aspiration of the Seahawks, who along with the Packers have done well in staying a top-tier enterprise. Delivering year after year has always been Carroll’s utmost priority.

“One of the things that I take the most pride in is trying to prove that” his methods sustain success, he said. “You don’t know until you look back and it’s all over.

“We’re all involved with transitions. (It’s) how you manage them and how you keep going forward.”

The Seahawks are in a fourth season of premium play, a season that started slowly and buttressed opinions of many pundits who said Seattle would fall off significantly once it had to pay top dollar for QB Russell Wilson, robbing them of the ability under the salary cap to fund other positions.

But now, at 7-5 and with a manageable schedule over the final four regular-season games, the pundits appear to have erred. It looks as if the Seahawks will return to the playoffs. Whether that run will include a third consecutive Super Bowl appearance is hard to say.

But it’s far harder to say that for the Ravens and 49ers, darlings of the football world three years ago. Mr. and Mrs. Harbaugh will offer eyewitness testimony.