Clausen again may be in Seahawks’ headlights

Sunday against the Seahawks, the Ravens may be down to third-string QB Jimmy Clausen, who’s already been throttled by the Seattle defense once this season. History beckons. 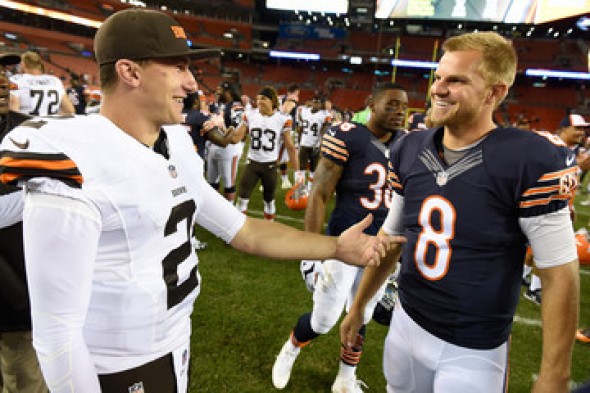 Johnny Manziel (2), who may start for the Browns against Seattle next week, greets Jimmy Clausen when he played for the Bears earlier this season. / Zimbio.com

The Baltimore Ravens were Super Bowl champs three years ago. They have qualified for the playoffs in six of the past seven seasons, during which they had a cumulative regular-season record of 72-40. A year ago they were 10-6, beat Pittsburgh 30-17 in a wild-card playoff game and gave New England a stout run before losing 35-31.

It’s worth remembering the recent history because the Seahawks and Ravens have met only four times in the Ravens’ 20-year history, thus are largely unfamiliar to many Seattle fans, and because the guys hosting the Seahawks in Baltimore at 10 a.m. Sunday (FOX) aren’t even familiar to Ravens fans.

Injuries have been so numerous  that the Ravens have been hired by DirecTV to play dorky, dweeby Rob Lowe.

The most head-shaking development is the potential start Sunday at quarterback of Jimmy Clausen, whom you may remember from his Sept. 27 appearance under the bus, where he was thrown by the Seahawks defense during a 26-0 triumph at the Clink.

He was employed at the time by the Chicago Bears, whose starter, Jay Cutler, was injured. The Bears watched grimly as Clausen, 28, completed nine mostly dink passes for 63 yards in 17 attempts, while fleeing a rush that sacked him twice.

Since his rookie season in 2010 when he made 10 starts for the pre-Newton Carolina Panthers, Clausen’s six-year career has included two other starts besides the Seattle debacle. His next may be Sunday.

Matt Schaub, the Ravens interim QB, didn’t practice at all this week because of shoulder and knee injuries during the 15-13 loss Sunday in Miami that dropped the Ravens to 4-8.  Schaub threw two interceptions among his 46 pass attempts, which allowed the Dolphins to score both touchdowns within 20 seconds late in the first half.

He also took a blow to the head that was not diagnosed as a concussion.

On the Baltimore injury report Friday, Schaub was upgraded to questionable. Wednesday, he was well enough to do a conference call with Seattle reporters, when he sounded at least a little optimistic.

Schaub was playing only because Joe Flacco, the only QB starter under coach John Harbaugh’s successful eight-year run (no losing seasons), tore his AC and MC ligaments in a 16-13 win over St. Louis Nov. 22.

That ended Flacco’s streak of 137 consecutive starts. The next day, the Bears cut Clausen, who signed quickly with the Ravens, only to discover Seattle again on the schedule.

The Seahawks were careful this week to avoid public snickering over getting another crack at Clausen.

“You can’t overlook him,” said DE Michael Bennett. “Jimmy Clausen is in the NFL, so he can play quarterback. (Ravens assistant coach) Mark Trestman has been known as the quarterback whisperer. He’s saved quarterbacks and made them look better than they are.”

That would certainly apply to Cutler when Trestman was the head coach in Chicago. Whether it applies to Clausen, who may still bear treadmarks from Sept. 27,  remains to be seen.

What is known is that Clausen could make history Sunday — he could be the first QB in NFL history to be shut out twice in the same season by the same team despite playing for different clubs.

Five other quarterbacks in NFL history have played multiple games with two teams against the same club: Kyle Orton, Jack Kemp, Norm Snead, Kerry Collins and former University of Washington star Chris Chandler in 1991 when he was with Phoenix and Tampa Bay.

John Harbaugh, who probably has sore shoulders of his own from shrugging them all season, didn’t sound as if he had a QB plan.

“Maybe we’ll play them both, we’ll just see how it goes,” he said.

Some might suggest the Ravens try running the ball a lot, but that didn’t seem to work well with the Vikings and Adrian Peterson last week.

Clausen may need to chuck, duck and pray that he doesn’t get cut and claimed by the Seahawks next opponent, the Cleveland Browns, who have their own QB problems. Stay sober, Johnny Manziel.

Lynch, Graham back in Seattle

The Seahawks’ two wounded stars, RB Marshawn Lynch and TE Jimmy Graham, were back at the team’s headquarters in Renton this week after surgeries. Rehabs are underway.

“I just saw Jimmy this afternoon before he popped out,” said Seahawks coach Pete Carroll. “He had a tough week or so getting started on the rehab. Everything’s situated well. He feels pretty good.”

Graham tore the patellar tendon under his right kneecap. The injury was serious, but Carroll has remained optimistic that Graham would be ready for 2016 training camp.

Lynch returned from Philadelphia, where he had sports hernia surgery, to Renton Wednesday, reporters spotting him watching the indoor practice from a hallway window. Carroll initially expressed optimism that Lynch might return in time for playoffs, but since has backed off the idea.

Carroll said he didn’t know when Lynch would return to practice.

“Marshawn is working out with us in rehab,” he said. “We’re still just going to wait. It’s a day-to-day thing that really will be week-to-week. Not this week for sure, we’ll see what happens next week.”