Sehawsks’ Russell Wilson is the only quarterback since the 1970 NFL-AFL merger to post 20 or more games of two touchdown passes and no interceptions. 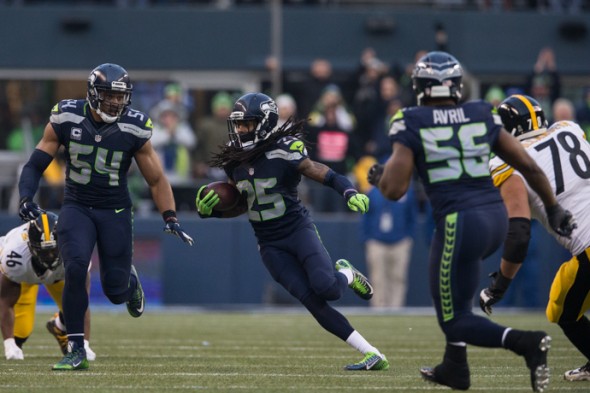 Football pundits throughout the land have spent much of the past week trying to ferret out exactly what has gotten into QB Russell Wilson these past three weeks. Eleven TDs. No picks. Completion percentage: 77 percent. Combined passer rating: 148.2. This is by far the best three-game stretch of Wilson’s four-year career, as CB Richard Sherman acknowledged.

Sherman said that what Wilson has done over the past three weeks is take away a defense’s ability to solve for him.

Sherman attributed Wilson’s recent run to increased opportunities (made possible in part by RB Marshawn Lynch’s absence) and his personal growth at the position.

“For quarterbacks, the learning curve is long. They’re growing and developing constantly,” he said. “You can check a lot of the great quarterbacks. I don’t think Aaron Rodgers even started until his third or fourth year and he still had time to grow. He’s grown and blossomed.  Obviously Tom Brady, Ben Roethlisberger, all had their time to grow and blossom. I think he (Wilson) is coming into his own.”

Although Wilson has never been considered a classic pocket passer (he first needs a pocket), he ranks first in the NFL from the pocket this season in completion percentage (72.8), passer rating (113.2) and is second in yards per attempt (8.76).

Given the perception of Wilson as a scrambler, the numbers are astonishing. Even so, Wilson is still not a unanimous choice as top-tier at his position, in large part because he is simply not traditional. Pete Prisco of CBSSports.com presented his case for same a few days ago.

But Wilson’s passing efficiency is indisputable, and always has been. Wilson is one of  three quarterbacks since 2012 to feature a passer rating above 100.0 (also Rodgers and Peyton Manning), and the only one with more than 20 games with two or more TD passes and no interceptions.

In fact, of all the quarterbacks who have played since the 1970 NFL-AFL merger (we count 16 in the Pro Football Hall of Fame among them), Wilson is the only one with more than 20 such games. Most games with 2+ passing TDs and zero INTs since the merger:

“I see a great player,” said Baltimore head coach John Harbaugh, whose Ravens host the Seahawks Sunday. “They built the offense around his skills and he’s operating it really well. He does everything well, he throws, he runs, he gets into the right place. He does a good job. He’s obviously playing at as high of a level as you can play.”

Wilson should be set up for a big game against the Ravens, who need to win out to avoid their first losing season since 2007, the year before Harbaugh took over as head coach (Baltimore is not yet eliminated, though it has a better record than only three AFC teams).

Baltimore sports the league’s fewest interceptions with four and second-worst turnover differential at minus-11. Also working against the Ravens Sunday: They may have to start at quarterback Jimmy Clausen in lieu of the injured Matt Schaub.

Clausen’s only start this year came in a 26-0 loss to the Seahawks in Week 3 while he was with the Chicago Bears (if Clausen starts, he will become the first quarterback since Kyle Orton in 2011 to start against the same team twice in a season for different teams). To say Clausen struggled is an understatement; he went 9-for-17 for 63 yards.

Hot as has Wilson been, the cautionary note is that, despite a 4-8 record, Baltimore is the first team in NFL history to have its first 12 games decided by eight points or less. The Ravens’ eight losses have come by a total of 34 points.