Bad news and good news: the Seahawks lost RB Thomas Rawls for the season to a broken ankle, but Russell Wilson led a 35-6 Seattle win with five TD passes. 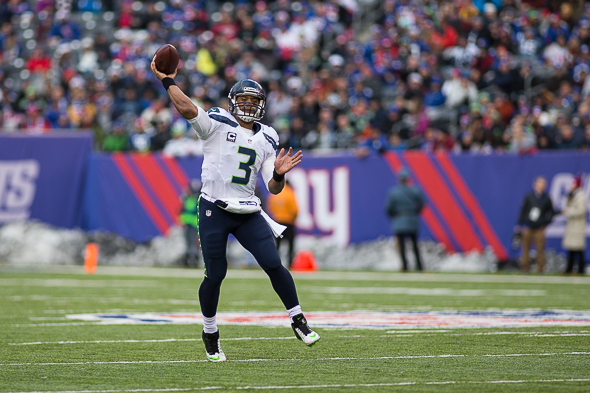 With rookie RB Thomas Rawls out for the year with a broken ankle and torn ligaments, the Seahawks had no recourse Sunday but to rely offensively on Russell Wilson, who responded with another historic performance. Wilson tossed five touchdown passes, three to the equally torrid Doug Baldwin, as Seattle crushed the Baltimore Ravens 35-6 (box).

The fourth win in a row and fifth in six games gives the Seahawks (8-5) the fifth seed currently in the NFC playoffs ahead of the Minnesota Vikings. If the Seahawks hold that wild-card spot through the Jan. 3 regular season finale at Arizona, they will open the playoffs the weekend of Jan. 10-11 at the NFC East champion, one among Washington, Philadelphia and the New York Giants, all with losing records now.

The Seahawks had a modest 14-6 lead at the half after LB Bobby Wagner’s fumble recovery deep in Baltimore territory set up a 14-yard Wilson-to-Baldwin TD. But Wilson went on a second-half tear as Seattle easily vanquished a Ravens team that has 16 players on injured reserve, including its best quarterback, running back and receiver.

Rawls looked well on his way to a fifth 100-yard game, gaining 44 yards with his first six carries, helping set up Seattle’s first touchdown. But Rawls was twisted around in a tackle on his sixth carry and didn’t get up for several minutes. He eventually walked off on his own. But after the game coach Pete Carroll disclosed the severity of Rawls’ injury.

Since Marshawn Lynch remains out following sports hernia surgery, the Seahawks are down to 34-year-old Fred Jackson and practice-squad call-up DuJuan Harris next week when they host Cleveland. Carroll might be spending time this week scrounging the waiver wire.

Wilson completed 23 of 32 for 292 yards and no picks fumbles or sacks. His five TD passes matched the franchise record set five times, including by Wilson Nov. 29 against Pittsburgh. Wilson and Matt Hasselbeck (Nov. 23, 2003 at Baltimore and Sept. 24, 2006 vs. the New York Giants) are the only quarterbacks in franchise history with two five-TD games.

In his past four contests, Wilson has thrown 16 touchdown passes without an interception. His passer ratings in those four: 138.5 vs. San Francisco, 147.9 vs. Pittsburgh, 146.0 at Minnesota, and 139.6 at Baltimore. Wilson is the first player since the 1970 NFL-AFL merger with four consecutive ratings of 138.5 or higher.

Four of Wilson’s top six passer ratings (career) have come in the past four weeks.

Wilson tossed touchdowns of 14, 22 and 16 yards to Baldwin, who had six catches for 82 yards and hit the end zone eight times in his past three contests. Wilson also pitched TDs of 8 and 49 yards to rookie WR Tyler Lockett, who posted his first 100-yard receiving game with six catches for 104 yards.

Neither was Seattle’s leading receiver in terms of catches. Jermaine Kearse, targeted eight times, had seven snags for 74 yards.

After Rawls departed, the Seahawks primarily went with Harris, signed to Seattle’s practice squad Nov. 23. He gained 42 yards, but lost a fumble.

Wilson might have finished with six TD passes had a wide-open TE Luke Willson not dropped a catchable ball in the end zone in the second quarter.

The Seahawks held third-string QB Jimmy Clausen and the Ravens to 302 yards, including 28 rushing. Clausen also lost to the Seahawks 26-0 in Week 3 while a member of the Chicago Bears. At least the Ravens managed two field goals.

CB Richard Sherman recorded his second interception of the season and the 26th of his career, tied for the sixth most in the first five seasons of a player’s career.

Safety Kam Chancellor left the game in the second quarter with a tailbone injury and did not return. Preliminary word is that the injury does not appear to be serious.

“We came in here for a purpose, that was our mentality. We had to be zoned in, in the second half, and we were. Right now we are really locked into it and each other. We’re playing the right way. We’re playing great football.” — Wilson