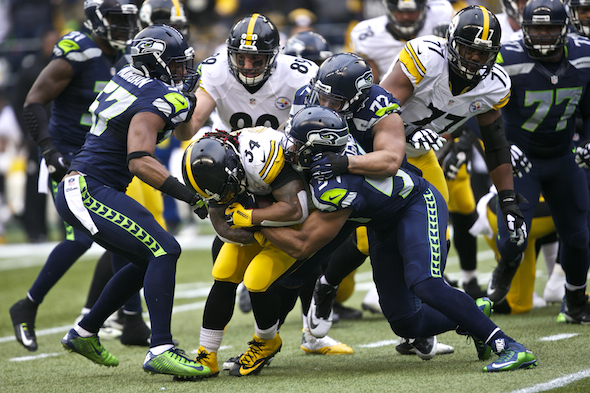 The Seahawks’ success against the rush, little celebrated, has been a key factor in the recent win streak. / Drew Sellers, Sportspress Northwest

Amid all the local and national gee-whizzery surrounding the Seahawks’ offensive renaissance, which is deservedly focused on the spectacular numbers being posted by QB Russell Wilson and WR Doug Baldwin, there are some subtle things going on that, on a Cleveland Browns week of Manziel mania, are worthy of some attention.

At his Monday presser, coach Pete Carroll spoke about three virtues that have helped make the 8-5 Seahawks a virtual lock for the playoffs and a threat to bust up the postseason:

Selfishness is vanishing: Players won’t admit it, but after each Super Bowl appearance, lots of them get at least temporarily more self-absorbed, eager for a greater slice of the action/money (Kam Chancellor, anyone)? But as the subsequent season moves on, the all-for-one, one-for-all sentiment begins to re-assert.

Carroll wouldn’t call it selfishness, but here’s how he put it Monday:

“The intention to play for one another is really clear. That really makes a difference. When everything else gets pushed aside and it’s about giving everything you have to the team, teams seem to go to different level. We’ve noticed that for years and years.

“It’s s delicate balance sometimes. It’s hard to get to that point. But once it happens, it’s pretty obvious. We have a chance to finish this season on a really high note.”

Wilson’s audibles are nearly good as his deep throws: The ability to recognize defenses and their disguises, then respond at the line of scrimmage, is something that comes only with experience. Carroll is thrilled with Wilson’s improvement in his fourth year.

“That was kind of hidden in the stats of the game . . . He continues to get better. He sees things more clearly and sooner. He can process what he sees and change us into the right protection.

“He’s not 100 percent. He’ll miss some stuff at times, or something won’t look quite the same as we prepared him. For the most part, he had a very good sense of moving around the running game, moving the pass protection around, had some nice checks. He looked very comfortable.”

Fat guys deserve some love too: DLs Brandon Mebane and Ahtyba Rybin are two of the team’s more obscure, if large, figures. But they have been literally central in stifling opponent rushing games.

The Seahawks have held the past four opponents under 60 yards rushing, and no individual runner has had more than 100 yards since Jamaal Charles of Kansas City last season. Said Carroll:

“It starts right in the middle up front. Every running play, those guys are significant factors. They have to maintain their gap control, and also allow the linebackers to fit properly. Rubin has been a fantastic addition to us. He’s been very consistent, so rock solid and so hard to knock off the football.

“The safeties and the guys on the edge, they just can’t affect it as much as the guys in the middle. So we owe a lot to them setting the standard for us, with the discipline and the consistency. It has given us a chance to keep the running game in order. They’re doing a great job.”

Post-game, Carroll was photographed atop a locker in the visitors’ quarters in Baltimore’s stadium, exhorting his players.

“That may have happened before,” he said, grinning. “I did that in a single bound.”

As is often customary in team sports, visiting team digs are small and unfriendly, just another small distraction designed to annoy and perhaps gain an edge. Often there is no space big enough for a coach to address the entire 53-man team at once. So Carroll took the highest road available to address the Seahawks.

“A more consistent effort is made in the NFL (than college to make visitors uncomfortable),” he said, citing late Raiders owner Al Davis as the worst of the worst in the Oakland Coliseum.

“Al organized that at the Coliseum,” he said. “The visitors locker room is awful. Different levels; it’s terrible. Can’t get together at all. Most locker room set-ups are very humble and small, segmented.”

Then he smiled: “Either you’re competing, or you’re not.”

SS Kam Chancellor, who fell hard on his tailbone in the second quarter and sat out the rest of the game, is “really sore today; he really is,”  Carroll said. “In a flash, he landed wrong, and got bruised pretty good.” Carroll called Chancellor’s chance to play Sunday “unlikely.” Backup Kelcie McCray “did really well,” he said. “I was really fired up about him.”  . . . CBs Marcus Burley and DeShawn Shead are nursing ankle sprains; TE Luke Willson had an MRI for some bruised ribs . . . DE Michael Bennett was in a boot to help deal with  chronically sore toe . . . LB Brock Coyle, a core special-teamer, is scheduled to return to the active roster this week. “He’s really primed and ready to go. So he’ll give us a little boost where we’d like to see it,” Carroll said.