Seahawks will be cautious with TE Willson

Down to a third-stringer at running back, the Seahawks were nearly in the the same shape at tight end. But Luke Willson (ribs) will play Sunday; Anthony McCoy (ankle) will not. 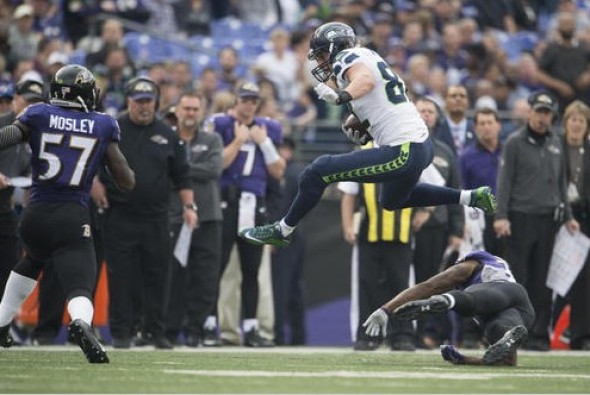 If a game of table tennis is any indication, Seahawks TE Luke WIllson is ready to play Sunday against the Cleveland Browns. Willson practiced Wednesday and Thursday, and Friday was listed as probable. Since the precise nature of his rib injury hasn’t been explained, it is unclear how much action Willson will see.

Ping pong with a net is a dubious test to determine whether an athlete is ready for four quarters of pro football, but Willson at least demonstrated that he was fit enough for athletic activity after getting hit hard Sunday in Baltimore in the 35-6 win over the Ravens.

“It was a little bit more than that,” said Carroll Wednesday. “Luke is a remarkable healer, I don’t know how he does it . . . it really gives us a sign that he has a chance to be ready to play this weekend.”

The key word in that statement being “chance.” The Seahawks are at a point where the playoffs are more likelihood than possibility. So decisions have to be made on the risk of overusing Willson.

The Seahawks lost TE Jimmy Graham for the season against Pittsburgh. The loss of the six-foot-five, 250-pound Willson would be a blow not only to the passing game but to rushing, especially without RBs Thomas Rawls and Marshawn Lynch, one out for the season and the other for an indeterminate amount of time.

As the ping pong ball flew between Nowak and Willson, it was easy to think that the 25-year-old would play Sunday, particularly given that backup TE Anthony McCoy did not practice due to an ankle issue. McCoy Friday was declared out of Sunday’s game.

At the same time, the fact that Willson underwent an MRI Monday, and Seattle re-signed free agent Chase Coffman off of waivers Tuesday suggests that perhaps Carroll’s confidence in Willson’s Wolverine-like healing ability isn’t absolute, although he made through full participation in practice Thursday.

Willson said that Coffman, a seventh-year journeyman, knew the system that he was expected to play in.

“He’s been around for a long time, so it’s nothing crazy-new to him,” said Willson.

The other Seahawks tight end expected to play, especially in the absence of McCoy, is third-stringer Cooper Helfet, who hopes to make his mark.

“Luke’s feeling pretty good, so hopefully we’re rocking and rolling,” said Helfet. “I’ve been here, I’ve been ready all season, so now it’s time for my opportunities and I’m going to take advantage of them.

“I’m really comfortable. I’m very aware of all the personnel, the formations, I can fill in in most of the positions. Not having to worry about the play call is a great benefit to making good plays out there.”

Willson said that playing with Helfet was familiar.

“Me and Coop have played together for a long time,” said Willson. “We’re pretty comfortable getting the job done.”

Especially with no travel stress to deal with ahead of Sunday’s kickoff, Willson has a chance. If he can make it through the Browns game,  he may be ready for the more serious test of toppling Nowak as locker room titan of the tables.