In a surprising move, the Mariners signed their free agent pitcher, Hisashi Iwakuma, after he failed his physical exam with the Dodgers, who offered $45 million over three years. 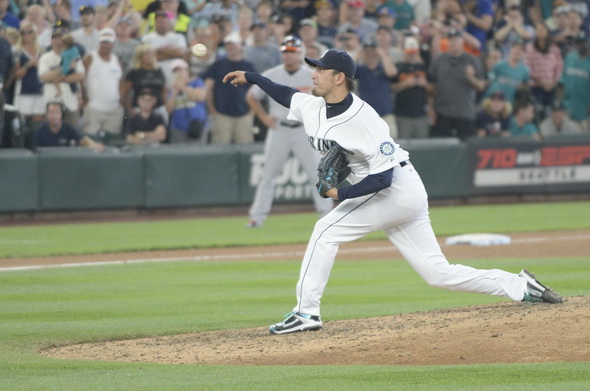 The crowd was on its feet as Hisashi Iwakuma closed in on his no-hitter against Baltimore. / Alan Chitlik, Sportspress Northwest

In the evening of the day he flunked a physical exam for his future team, the Los Angeles Dodgers, free agent RHP Hisashi Iwakuma abruptly re-signed with the Mariners, his team of the past four years. General manager Jerry Dipoto announced Thursday night that  Iwakuma, 35 in April, signed a deal for 2016 with vesting options for 2017  and 2018.

“We said from the start that Kuma was a priority for us,” Dipoto said in a team statement. “Obviously, the developments from the last few days allowed us to get back in the game.

“It’s a credit to our ownership; to (CEO) Howard Lincoln, to (president) Kevin Mather, to our entire ownership group that we were able to get aggressive and find a way to bring Kuma back to the Mariners. We’re all thrilled. This is a big move for us. We feel like this really puts a finishing touch on what we think has been a very productive off-season.”

Iwakuma signed a deal Dec. 6 with the Dodgers for $45 million over three years after concluding his Mariners tenure for $7 million in 2015. The Mariners offered $30 million over two years, but were unwilling to guarantee a third year. The Dodgers were, pending a physical, but for reasons still unclear, Iwakuma didn’t pass the exam.

He missed the first month of 2014 season with a strained tendon in a finger, and missed 10 weeks in 2015 with a strained lat muscle behind his right shoulder, but he returned in early July.

On Aug. 12 vs. Baltimore, he threw the fifth no-hitter in Mariners history (fourth by a single pitcher) and became the second  Japanese-born pitcher with a major league no-hitter (Hideo Nomo, twice).

In 2013, he was an American League All-Star and was named the Mariners MVP pitcher by the Seattle chapter of the BBWAA.

Earlier in the day, Jack Zduriencik, Dipoto’s predecessor in Seattle now a commentator on MLB Network, said the failure in the physical severely limited Iwakuma’s options at this point in the calendar.

“He’s in a tough spot right now,” Zduriencik said on MLB Tonight. “He’s turned down the (Mariners) qualifying offer. He’s now a free agent technically, and his options are the Dodgers can try to re-sign him or work something out at a reduced rate. Any club right now can do the same, as can the Seattle Mariners for that matter. So his leverage is kind of shot right now.”