The Seahawks are two-touchdown picks over the 3-10 Cleveland Browns, but several opponents with abysmal records have knocked off Seattle at home. 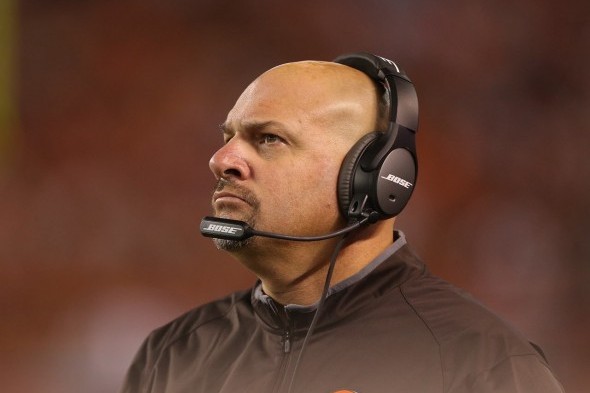 Mike Pettine backed off his statement that Russell Wilson is not a top-tier quarterback. / Cleveland.com

Cleveland Browns coach Mike Pettine created a stir earlier this week when he said Russell Wilson is not among the NFL’s top-tier quarterbacks. This, mind you, came from a guy who enters Sunday’s game against the Seahawks at CenturyLink Field with a 3-10 record, is 10-19 over the past two seasons, and presides over the most dysfunctional franchise in the NFL. But Pettine is entitled to his opinion, which was:

“Would you put (Wilson) in there with the guys that can transcend their supporting cast? Tom Brady, Aaron Rodgers, Drew Brees, Ben Roethlisberger, the ones that you would consider the two, three, four elite guys? No. But he’s certainly played himself into that next tier.”

Pettine is correct that Wilson doesn’t yet belong among the top four in the NFL, although he has clearly outplayed the best over the past month — with one caveat: The teams he has destroyed with 16 touchdown passes and no interceptions (San Francisco, Pittsburgh, Minnesota and Baltimore) are not among the league’s best defensive teams, ranking 19th, 11th, 9th and 23rd in scoring defense.

Pettine took predictable guff for his Wilson remarks Wednesday and — no surprise — was in full retreat by Thursday, deciding that Wilson is, upon further review, a top-tier quarterback after all. In his revised rankings, Pettine also decided that every quarterback who has ever played is also in the top tier.

“If anyone is interested, I have updated my QB rankings,” Pettine said. “Every quarterback that’s ever played is tied for No. 1.

“It’s not my job to rank quarterbacks, and I know the bottom line for those guys and he (Wilson) said it best, it’s to win football games. He’s one of the best at that. He’s very productive and is the perfect quarterback for what (the Seahawks) are trying to do. They’ve also built it around him.”

Give Pettine credit for a sense of humor. Clearly, he needs one. His Browns are trying to determine if they can build around frat-boy QB Johnny Manziel and will use Sunday’s game as another audition. If Manziel, who threw for 274 yards with a TD and a pick last week against San Francisco (89.2 QB rating), doesn’t work out, Cleveland will again be without a quarterback after wasting a first-round pick on “Johnny Football” two years ago.

Imagine how beleaguered Browns fans must feel after so many years of ineptitude. Since the franchise was re-born in 1999, after the original Browns vamoosed to Baltimore, Cleveland endured 14 seasons, including this one, of 10 or more defeats, most in the NFL over that span (the Seahawks have had three):

Oddsmakers predict an easy win for the Seahawks Sunday. They opened a two-touchdown favorite and that hasn’t changed. But the lopsided forecast is reminiscent of another “rout-about-to-happen” against the Tampa Bay Buccaneers two years ago, also at CenturyLink Field.

You may recall: The Seahawks entered that Nov. 3, 2013 game with a 7-1 record and were a double-digit pick over the 0-7 Buccaneers. But Tampa Bay, behind QB Mike Glennon, took a 21-7 lead. The Seahawks were forced to make up a 21-point deficit, 10 in the fourth quarter, to force overtime. Steven Hauschka finally put it in the win column with a 27-yard field goal.

Worse: On Dec. 20, 2009, when Jim Mora Jr. was coaching his way out of the NFL, another Tampa Bay team arrived at CenturyLink Field sporting a 1-12 record. Oddsmakers made those Buccaneers a 15-point underdogs. They did not foresee that Seattle QB Matt Hasselbeck would gift the Bucs five turnovers. Tampa Bay won 24-7 with maybe 500 irate Seahawks fans hanging around at the end. Mora didn’t last another month.

Can’t say the Browns will pull off a similar shocker Sunday, but the Seahawks have sustained a number of defeats to teams they should have shellacked — all prior to coach Pete Carroll’s arrival. Seattle’s losses to teams with 10 or more defeats entering the game (the record in the chart is the opponent’s standing at kickoff) with the Browns listed for comparison purposes:

Cleveland might be 3-10, but last week the Browns recorded nine sacks against the San Francisco 49ers, a clear indication they have not hoisted a white flag.

“They had a great day in all aspects of their game,” Carroll said this week. “Everything was working. They were running it, they were throwing the ball down the field, they were rushing them. They just had a great football game and I think once they got them (the 49ers) out of their rhythm and forced them into the throwing game, they just took advantage of it.”