Seahawks coach Pete Carroll declined to pick a starter Friday from the three-man committee that will carry the ball Sunday against the Browns. Likely that all three will play some. 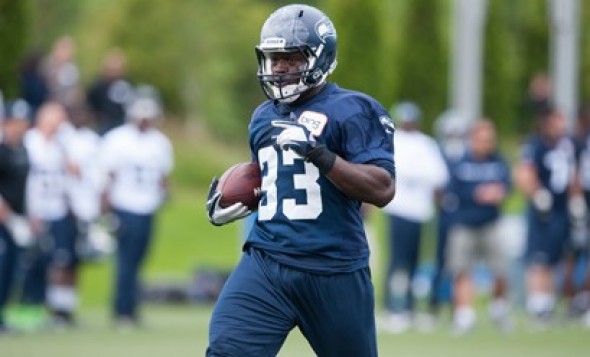 Christine Michael, this time wearing No. 32, is back in town. / Seahawks.com

Meet the Committee At Running Back: Brown, Bryce; Coleman, Derrick;  Michael, Christine. Listed alphabetically. Because there is no other order provided by Seahawks coach Pete Carroll. Only when he pulls back the curtain at 1 p.m. Sunday at the Clink, will the Cleveland Browns learn at the same time as everyone else.

“They had really good weeks, they busted their tails,” Carroll said Friday after practice. “Played fast, practiced fast and we’ll show you what happens at game time.”

Carroll may not even know, such is the mystery following the injury absences of Marshawn Lynch and Thomas Rawls. The team that puts the most effort in the NFL into running the ball has no go-to guy, just go-three guys.

“I’m just trying to wait until game time,” he said.  “All of those thoughts that you guys have are true. Everything you can possibly think of is right.”

Coleman, 25, has been with the Seahawks the longest, four years, but nearly all at fullback. He has five career carries for 25 yards, including a career-long 19 last week in Baltimore during mop-up time. He actually has been a better receiver, 11 catches for 91 yards and two TDs.

Michael, 25, is the highest draft pick, a second-rounder three years ago, and so disappointing the Seahawks traded him in September for a seventh-rounder. But after his surprise signing Tuesday, he returned talking about humility and redemption.

Brown, 24, is the classic NFL fringe guy, off and on rosters and practice squads, called to work out for many teams. The Seahawks have signed him three times this season and cut him twice. He hasn’t played in a game since December 2014 in Buffalo.

“It is crazy,” he said. “But you hear stories from people who’ve been in the league longer than I have — it’s not something I haven’t seen before.”

The biggeat curiosity is Michael, the throwaway who was brought back, which allows critics to revisit the claim that the Seahawks don’t do top-end draft picks very well. But Carroll rarely looks back and laments.

“He’s very serious about the opportunity,” Carroll said of Michael. “Worked really hard, met extra to make sure he could catch up. He did pick everything back up very quickly. He’s very comfortable in the offense, so that’s really a good sign.

Part of the reason for picking him up (is) we knew he could jump in like that. He had a very good week and looks very quick. He’s really hungry and ready to go.”

The other key injury is Kam Chancellor’s bruised tailbone, which kept him out of practice all week and has him listed as questionable for Sunday. Carroll said he will be a game-time decision and said, “He could jump in and play.” If not, Kelcie McCray will get his first start.

Despite what could be ribs cracked Sunday, TE Luke Willson will play.

“He continues to just amaze us at how he comes back,” Carroll said. “He got hurt pretty good and he didn’t miss even a walkthrough, or anything. He got all the work done this week, so he’s going.”

CBs DeShawn Shead and Marcus Burley have recovered from ankle sprains, but TE Anthony McCoy has not, meaning TE Cooper Helfet will get more action . . . DT Jordan Hill remains out because he “tore something in his big toe. It’s not a full tear but something that has been nagging him, bothering him,” Carroll said. “Hopefully next week should be the time he gets around to trying to get back  . . . It’s a pretty good injury.’’ . . . The Seahawks opened as 13½-point favorites over the 3-10 Browns, now up to 15, biggest spread in the NFL this weekend and the biggest for the Seahawks this season.