With a 30-13 victory over the Cleveland Browns Sunday, the Seahawks (9-5) clinched a playoff berth for the fourth consecutive season under coach Pete Carroll. 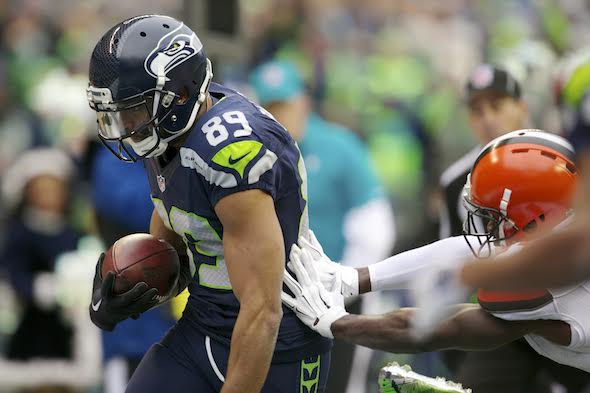 QB Russell Wilson and WR Doug Baldwin continued their historic touchdown rampage Sunday as the Seahawks, tested early by the surprisingly effective but ultimately irrelevant Cleveland Browns, rolled to a 30-13 victory at CenturyLink Field that clinched a fourth consecutive playoff appearance under coach Pete Carroll (box). If the season ended today, Seattle (9-5) would hold the NFC’s No. 5 seed due to a tiebreaker with Minnesota, also 9-5.

Wilson threw two touchdown passes to Baldwin and another to WR Tyler Lockett, giving Seattle its fifth consecutive victory and seventh in eight games after starting 2-4 and 4-5,  marked by a series of blown leads in the fourth quarter.

Wilson has 19 touchdowns without an interception over his past five games. He is the first quarterback in NFL history with three or more touchdown passes and no interceptions in five consecutive games.

Baldwin not only tied a franchise record most TD receptions in a season (13), he became only the third player in the Super Bowl era to catch two or more TDs in four consecutive games, joining Calvin Johnson in 2011 and Cris Carter in 1995.

Baldwin has 10 TD snags in those four and his 13 match Daryl Turner’s single-season franchise record in 1985.

Ably abetting Wilson and Baldwin was RB Christine Michael, signed earlier in the week after Thomas Rawls was lost for the season. Michael rushed for 84 yards on 16 carries, didn’t fumble, and has probably played himself into a starting role next week against St. Louis.

Leading 20-10, but pinned at their own four-yard line with 5:54 remaining in the third quarter, the Seahawks marched methodically to the Cleveland 27-yard line, where Wilson completed the drive with his third touchdown pass, this one to Lockett. The score put an emphatic end to hopes by the 3-11 Browns of pulling off the upset.

The Seahawks have scored 29 or more points in six consecutive games, a franchise record.

While Baldwin and Lockett scored the touchdowns, WR Jermaine Kearse delivered the best regular-season game of his career, catching seven balls on eight targets for 110 yards. He helped extend drives by making four key catches on third down as the Seahawks went 9-for-12 in that situation.

The Seahawks amassed 423 yards to Cleveland’s 230 and averaged 6.2 yards per play to the Browns’ 4.2. Seattle finished with 182 rushing yards, a phenomenal total in the absence of Rawls and Marshawn Lynch.

With 16 seconds remaining before halftime, the Seahawks got the ball and scored in three plays. Wilson completed a five-yard pass to Kearse, ran for 11 yards and then found Kearse for 39 yards. On that play, which should have been the final one of the half, the Browns drew a face mask penalty, setting up Steve Hauschka’s 27-yard field goal.

The Seahawks have allowed only one touchdown in the past three weeks. That came on a 15-play opening drive in which QB Johnny Manziel completed four of six passes. Manziel completed 19 of 32 for 161 yards with one TD and one pick.

When the Seahawks allowed the score, it snapped a streak of 21 consecutive drives without allowing a TD.

CB Marcus Burley not only recorded three tackles, but had the first game of his career in which he recorded a sack and an interception.

“What magnificent production. It’s clear they (Wilson and Baldwin) are working well. Jermaine had a huge day. If we can keep that going, that’s something we can ride through the end of the season. We are on a really good, consistent roll right now. We didn’t turn the ball over again on offense, and that’s fantastic to do that. We’re coming back. The efficiency of the offense is the best since we’ve been here. Its marvelous to be finishing like this again. That’s pretty cool.” — Pete Carroll, Seahawks coach

“Doug (Baldwin) is playing Pro Bowl-type football. But I have all the confidence in all the receivers. Those guys can make all the plays. Ultimately, we’re just playing great football.” — Wilson

“He’s the fastest quarterback we’ve played against all year. He did a great job for them” — DT Brandon Mebane on Manziel

The Seahawks are playoff-bound for the 10th time in 13 seasons . . . Seattle is 27-5 in the months of November/December since 2012 . . . Seattle has won 18 of its past 24 dating to last year and is 12-6 all-time against the Browns . . . Seattle has had a lead in 62 consecutive games, an NFL record . . . Wilson has 45 career wins and is 27-4 at the Clink during his four-year career. . . Sunday’s win marked the 100th of Carroll’s professional career . . . LT Russell Okung departed in the second half with a calf injury and did not return . . . The Seahawks played without SS Kam Chancellor, out with a tailbone injury.