The 30-13 win clinched a playoff berth, but the method Sunday was gratifying to coach Pete Carroll: Backups stepping into prominent roles as the postseason looms. 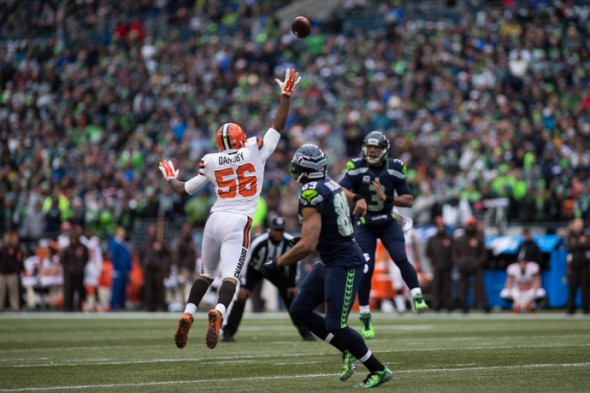 At 2-4, the Seahawks were stuffed, mounted and nailed to the perch. Dead bird. Two months later, they have clinched a playoff spot two weeks before the end of the regular season. Beautiful plumage.

No Marshawn Lynch. No Thomas Rawls. No Kam Chancellor. No Jimmy Graham. No difference.

Granted, Sunday’s opponent was the 3-10 Cleveland Browns, now 3-11 after a 30-13 defeat that was almost inevitable given the relative places of the franchises. The Browns haven’t been to the playoffs since 2002; the Seahawks made it for the fifth time in coach Pete Carroll’s six seasons in Seattle.

But think about that big picture for a moment: Five times in six seasons, for a franchise that made the postseason five times in its first 27 years.

“I like that,” said Carroll, beaming. “I like that a lot. That’s what we’re here to do — be consistent and be on top, and battle to see how far you can take it.

A fifth consecutive win does that. But the way it was done was particularly gratifying to Carroll. On offense, nine of 12 third-down conversions, and no turnovers. On defense, one touchdown allowed, a turnover and no pass longer than 22 yards.

Given the season’s earlier problems, the past five games have been the purest expressions of Carroll’s axioms of persistence and belief in team.

“If we kept working really hard, and believing in other, we’d eventually find it,” he said.  “And we have.

The offense is the best it’s been since we’ve been here.”

The statement is even more remarkable considering the list of injured. Into the breach at running back stepped Christine Michael (84 yards, 16 carries), Bryce Brown (43 yards, nine carries) and Derrick Coleman (10 yards, five carries).  Add Wilson’s 46 on five carries, and the 182 yards on the ground was a remarkable feat and another chapter in the rise of the once-woebegone O-line.

Michael’s hard, apparently error-free running was an uptick from the inattentive, erratic play of his first go-round with the Seahawks that ended abruptly with a trade in September to the Cowboys. The turnaround may have worked Michael into the starting job that Sunday went to Coleman, a reliable, less talented back.

Carroll was quick to douse the notion of naming a starter for the next game at home against St. Louis.

“We’re not using that word,” Carroll said when asked if the “committee” approach to the position will continue. “We don’t know that word. We’re just going to go one day at a time and see how ha goes.

“Christine was very serious about adding to the team. He’s been through a lot since he was here before. He recognized the opportunity. He was very clear about it.”

Michael talked last week of being humbled by his travails. That didn’t change post-game.

“The ultimate thing is just being a part of this team,” he said. “The guys that drafted me . . . I wouldn’t want to be anywhere else but here.”

Said teammate FS Earl Thomas: “You never know what’s going on in somebody’s head. Any other guy (who) would get cut, would have some hard feelings. But he’s a grown man, turning into a pro. I’m excited for his success.”

McCray, an ace on special teams, led the Seahawks with eight tackles, and Lane had four. And CB Marcus Burley played the nickel position and came up with a sack and an interception.

“Jeremy did a great job,” Carroll said. “That’s a really big positive. Kelcie has had back-to-back good solid games. Burley too. It was pretty exciting.”

Carroll’s giddiness is not just post-win blather. With the playoffs certain, he can now manage his use of personnel over the next two games to minimize injury risk and do what he can to provide rest. The fact that competence is available to fill in for missing stars is essential at the time in the calendar.

The Seahawks (9-5) want to hold their No. 5 seed in the NFC race because the win Sunday night by Arizona gives the Cardinals the West division title and ends Seattle’s chances for a three-peat.

At five, the Seahawks go on the road to face the No. 4 seed in the first round from one among NFC East contenders Washington (7-7), Philadelphia (6-8) and the New York Giants (6-8), any of which would be better than facing the likely No. 3 seed Packers in Green Bay, should the Seahawks fall to No. 6.

The final regular-season game for Seattle in Arizona is shaping up potentially as meaningless for playoff positioning. Another Seahawks win or a loss by the No. 6 Vikings means there will be no stakes, beyond pride, in the outcome with the Cardinals.

That will be odd. But the Seahawks seem to deal well with odd.

The penchant for finding, growing, throwing away and rediscovering, talent is a most useful tool this time of year. That’s how to, as Carroll put it, stay on top.