Sunday’s loss was an exercise in tipping the scale between Johnny Football, the pop culture star, and a young football talent growing into his pro potential. 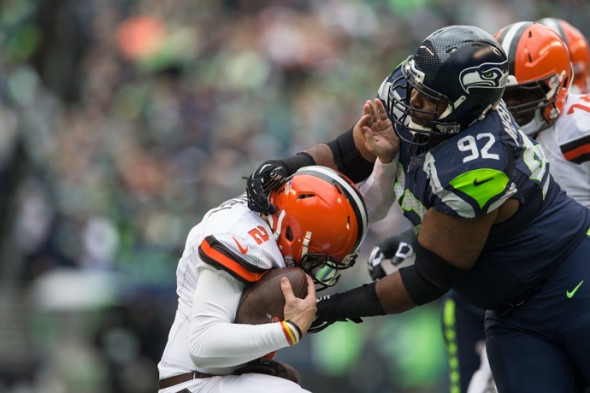 Standing at the podium after Cleveland’s 30-13 loss to Seattle Sunday, QB Johnny Manziel looked nothing like the petulant party-boy that had gotten himself in trouble for a bye-week bender. On the field, too, Manziel seemed possessed of the poise and raw talent that has made him one of the league’s most intriguing—and often frustrating—young players. Manziel admitted he wasn’t sure what the future in Cleveland would hold, but showed Sunday that he could play a productive role against the No. 2 defense in the NFL.

Manziel said he craved the kind of familiarity, consistency and experience that Seahawks QB Russell Wilson shares with his receivers, several of whom—such as Doug Baldwin, who tied a franchise record for receiving touchdowns in a single season with his 12th and 13th Sunday—had played together for several years.

“They’ve been here for a while,” Manziel said. “They’ve been doing this for a while at a really high level. I think that this is the best that (Wilson) has played throughout his career . . . I don’t know if I can picture that moving forward. We’ll see what happens, I don’t think anybody really knows.

“I want these guys to be here next year. I want to have these receivers, the people that we have on this roster, on the staff, so that we can go through the spring and have some of that continuity. It would definitely be a luxury, for sure.”

The statement was remarkably mature for a player who has a reputation of being anything but. That maturity showed itself more often than not Sunday.

Manziel rolled into Seattle on a relative high, having thrown for 270 yards and a touchdown the week before against the 49ers. Things kept rolling for the second-year player, who led the Browns from the opening kickoff on a 15-play, 80-yard drive capped by a seven-yard toss to TE Gary Barnidge for the opening score of the game.

“That was kind of the highlight of the day for us,” he said.

Manziel twice more led the Browns to the red zone, but each time a combination of dropped passes, mis-timed routes, and a sack courtesy of CB Marcus Burley meant the Browns had to settle for field goals.

“We needed to sustain some of those later drives where we ended up kicking for three,” said Manziel. “We can’t say we didn’t get down there and give ourselves a chance.”

Manziel finished 19-of-32 with a touchdown, a fumble and an interception, with an overall passer rating of 69.9. The rating doesn’t tell the whole story. Both the fumble and the interception came late in the fourth quarter with the Browns chasing the game.

Manziel was impressive in and out of the pocket, getting rid of the ball quickly at the start of the game, before settling in and demonstrating willingness to extend the play and slip out of the pocket as things wore on.

“That (Seattle) pass rush is relentless,” said Manziel. “They get stronger as the game goes on . . . I think they opened up some of the lanes. They did a good job of rushing wide and making me step up and then try and get outside. Once you get outside, the linebackers are fast, and their outside speed-rushers can chew up ground pretty fast.”

Manziel—and umpire Barry Anderson—found out just how fast on a third-and-six that saw LB Bobby Wagner blitz through the line unblocked, forcing Manziel into a mad backward dash. Manziel got rid of the ball before all three collided and rolled to the ground.

Part of the need to escape the additional pressure came after veteran LG John Greco went down with a knee injury on the second play of the game and did not return.

“Losing (Greco) hurt that early in the game, having to jumble the lineup,” said Browns coach Mike Pettine. “This late in the year, those backups aren’t getting a lot of quality reps with the ones, but that’s a part of it. They have to be able to step up and play.”

Manziel was impressive on third down as well. The Browns converted 50 percent of their third downs, on which Manziel went 4-of-7 with a pick, as well as a 12-yard scramble to move the chains. The 50 percent figure is higher than the third-down conversion rate posted by the Panthers, Steelers, Bengals, and Cardinals against Seattle this season, which has held opponents to a 32.1 percent conversion rate.

“Johnny’s a pretty cool player,” said Rubin. “He does relax, and I think he’s just going to go out there and play. Johnny’s going to make plays, he’s a deep threat . . .and he can get out of the pocket.

“I think Johnny was playing pretty good today, but unfortunately for him he didn’t get the win.”

For the 3-11 Browns, the season ends Jan. 3 in a home game against the Steelers. In a sense, though, the next season for Manziel has already begun. The next two games represent a chance to build consistency and familiarity with a group of receivers he hopes to play with next season.

Maybe Sunday’s show of maturity will help overcome the mistakes of youth, and Manziel will rise to meet the high expectations that have followed him throughout his career.