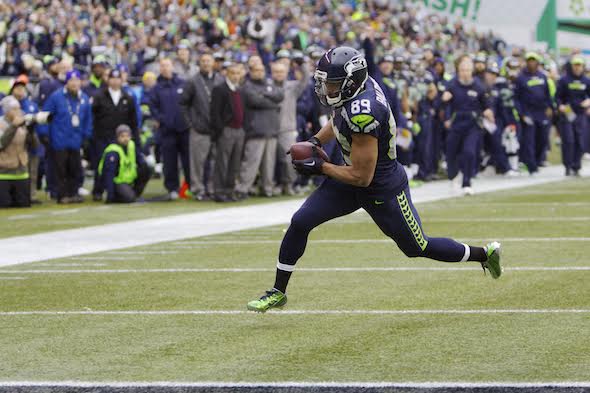 It took Doug Baldwin 72 games over a span of nearly five years to catch 18 touchdown passes and only four games to snag his next 10. That 35.7 percent of Baldwin’s career scoring portfolio has been complied in less than a month drew predictable whoops from a Seahawks locker room celebrating Sunday’s 30-13 playoff-clinching thumping of the Cleveland Browns at the Clink.

Coach Pete Carroll: “It’s kind of exciting. I think somebody said 10 touchdowns in the last four games. What magnificent production there.”

QB Russell Wilson: “Doug is playing unbelievable football. He’s playing All-Pro football and Pro Bowl-type football. He can do so many different things for us. When you go throughout your career, you want to continue to progress. He’s done such an amazing job of that. He has crazy talent, and he’s so smart. His work ethic, his leadership is as good as it can possibly be in the National Football League.”

WR Jermaine Kearse: “That’s the definition of balling right there. He’s going to have to take the offensive line out to eat or something.”

WR-KR Tyler Lockett: “Nobody cares about who makes the great plays or anything like that. If one person does great, we’re celebrating with them. If Doug Baldwin does great, we’re going to celebrate with him. So when you see Doug score, you see all of us running over there.”

CB Richard Sherman: “He’s an amazing player. He’s a top-tier player in this league. He can get open and he can catch the ball. There’s not many things out of his realm, out of his ballpark. There’s not much that he can’t do. So for him to be mentioned in the same breath as a Hall of Famer (Jerry Rice), and one of the best players to ever play this game, it’s definitely a blessing. But it just shows the type of player he can be when given the opportunity.”

Using its one-of-a-kind database, the Elias Sports Bureau made the instant connection between Baldwin and Rice, pointing out that they are the only receivers in NFL history with 10 receiving touchdowns spread over four consecutive games in a single season.

In assessing Baldwin’s historical accomplishment, it is necessary to look at two statistics: Most TD catches in any four-game span (emphasis on “any”) and consecutive games with multiple TD catches. Five players figure prominently in this archive dive, including Baldwin. The five:

Playing for the Oakland Raiders, Powell caught 10 TD passes in the final three games of the 1963 season and the first game of 1964. Rice, playing for the 49ers, had 10 from weeks 10 through 13 in 1987. But neither had multiple TDs in every game as Baldwin did (three vs. the Steelers in week 12, two at Minnesota in week 13, three at Baltimore last week, and two Sunday).

In Powell’s run, he scored three TDs against San Diego, two against Denver, four against Houston and one vs. the Boston (now New England) Patriots. Rice had three TDs in games against Tampa Bay, Cleveland and Chicago, but only one against Green Bay.

Neither Carter nor Johnson scored 10 TDs in their four-game streaks, but they had multiple TDs in each game, as Baldwin did. Carter scored two each against Arizona, New Orleans, Detroit and Tampa Bay from weeks 10 through 13 in 1995. Johnson had two apiece against Tampa Bay, Kansas City, Minnesota and Dallas to open the 2011 season.

Here’s what separates Baldwin from the other four: He needed only 21 catches to produce 10 TDs, turning 47.6 percent of his receptions into end zone celebrations. How that compares to the four-game streaks of his predecessors:

So what we’ve just witnessed is the most opportunistic receiver over any four consecutive games in NFL history.

Baldwin didn’t comment on his personal heroics Sunday, but did respond to a comparison someone made between him and Steve Largent, the ex-Seahawk and 1995 Hall of Fame inductee.

“He’s helped me tremendously,” Baldwin said. “His knowledge of the game and the nuances that he can teach me and the subtleties that he’s taught me about the game has been vital to my improvement and my development as a player. I’m anxious to share this moment with him.”

No less thankful are the 12s, who have shared an historic run from Baldwin.