Neither Cougars nor Hurricanes came close to selling their allotment of Sun Bowl tickets, and the El Paso locals have not warmed to the visitors, particularly WSU, which banned interviews. 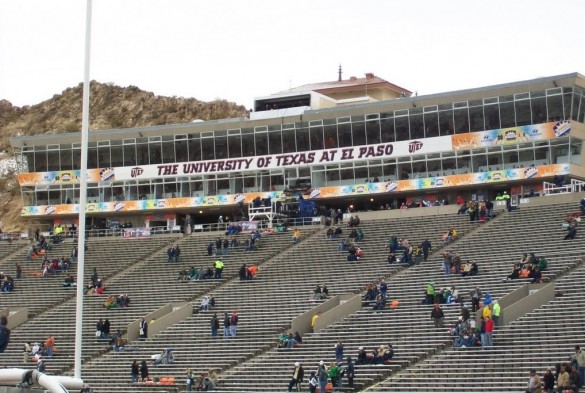 This may be the greeting for Washington State and Miami in the ho-hum Sun Bowl Saturday in El Paso. / Panoramio.com

Luke Falk likes to sleep at least nine hours a night. If the Washington State quarterback falls short of his goal the night before the Sun Bowl, he can probably catch a few Z’s in the stands during the game.

Vast expanses of the 51,500-seat Sun Bowl stadium are expected to be unoccupied Saturday in El Paso, TX (11 a.m., CBS). Local interest has been lukewarm, and WSU and Miami both fell far short of selling the 6,000 tickets allotted to each school. The Cougars said they sold about 3,000. The Hurricanes were apparently so embarrassed about their sales, they refused to give out numbers.

Reasons for tepid fan interest are plentiful. For starters, only 47 of the 127 Football Bowl Subdivision teams do NOT play in bowl games. Also, many fans balked at spending Christmas out of town, and airfares to El Paso range from pricey to preposterous. The Cougars, unlike Miami, did what they could to limit advance publicity for the game by making players off-limits for interviews in El Paso.

Hey, that makes sense. After all, the Sun Bowl pays each team only $2 million or so. Why should bowl officials expect college students to play football AND talk for just $2 million?

The Cougars and Hurricanes own 8-4 records, and neither is ranked in the Top 25. The Cougars, playing in just their second bowl game since 2003, finished the regular season with an ugly 45-10 loss at Washington. Miami is 4-1 since interim coach Larry Scott replaced the fired Al Golden (newly hired Mark Richt won’t coach in the game), but the Hurricanes have lost five consecutive bowl games.

The Cougars are 2½-point favorites against a Miami squad that placed no one on the All-Atlantic Coast Conference first team. Falk, offensive left tackle Joe Dahl and wide receiver Gabe Marks made the all-conference first team in the Pac-12. However, Falk sat out the Washington game with a reported concussion, and it remains to be seen how effective Dahl and Marks will be – if, indeed, they play – after foot and/or ankle injuries.

The Cougars, of course, dispense injury information as if such matters are controlled by the federal witness protection program. Dahl, Marks and starting slot receiver River Cracraft were limited in practice last week in Pullman. The Cougars (and Miami) close all but the first 15 minutes of El Paso practices to the media.

Both teams prefer to move the ball through the air. Miami has the statistical edge on defense, but Pac-12 offenses are considered superior to those of the ACC. Special teams play has been unspectacular on both sides.

Factoids that could prove pivotal (national rankings prior to bowls):

The Hurricanes yielded just 15 quarterback sacks, but starting right tackle Sunny Odogwu is out with a knee injury. It remains to be seen how (if?) Dahl will play against the blitz-happy Hurricanes. He’s been sidelined almost two months following surgery for a broken foot.

Falk, addressing reporters before the Cougars left Pullman, described Miami’s defense as “an athletic bunch that flies around. A tough defense.”

“They blitz quite a bit,” Cougars coach Mike Leach said. “Not as much as Arizona State, but more than most teams. Probably 35 percent or something like that.”

El Paso doesn’t rate high as a holiday vacation destination, but the Mexican food is to die for in the city across the Rio Grande River from Juarez, Mexico. For those scoring at home, Juarez annually ranks among the world leaders in murders.

The Sun Bowl, one of the oldest bowl games, is known for providing a good time for guests. When the Cougars and Hurricanes arrived at the El Paso airport Monday, they were met by a mariachi band playing Christmas carols. In short order, Leach and Scott were wearing sombreros.

Leach said cowboy hats were part of the haul of free goodies handed out at bowl games when he guided Texas Tech to bowls during each of his 10 seasons in charge of the Red Raiders. Not that Leach spent much time enjoying his stash.

The Sun Bowl stadium sits at the foot of the Franklin Mountains, making for a scene that Leach compared to one where habitants once were “waiting for the posse or the Comanches or the Apaches to come over the ridge.” The view from the stadium might not be as grand as usual on Saturday, because the weather forecast calls for rain and a high of 51 degrees.

Rain or shine, the Cougars pass constantly, and Falk routinely completes passes to 10 or more receivers. Sophomore QBs Falk and Brad Kaaya of Miami already rank among the leading passers in school history.

Falk must keep an eye out for Miami inside linebacker Jermaine Grace. The junior has 76 tackles – 25 more than any other Hurricane – two sacks and six tackles for loss. Various WSU defenders have played starring roles, but freshman All-America end Hercules Mata’afa has excelled down the stretch.

In a career first, Hercules will lose “name of the game” honors to Miami cornerback Corn Elder. The latter is best known for scoring on the eighth lateral (and, it turned out, after about the eighth officiating error) to beat Duke as time expired in Scott’s first game as head coach.

The Cougars like to think they can beat the Hurricanes without any late-game heroics. The Cougars couldn’t beat Miami High School if they play like they did against Washington.

“It doesn’t affect anything,” WSU safety Shalom Luani insisted. “We just have to focus on what we do and just execute.”

That plan has worked well enough for the Cougars to win more games than any WSU team since the 10-3 squad of 2003. That was the last year the Cougars won a bowl game (the Holiday Bowl versus Texas).

“We’ve had a good season up to this point,” Falk said. “We’ve got to finish the right way to send the seniors out right.”