RB Fred Jackson, a career guy in playoff-free Buffalo, has waited a long time for the postseason. He will get his chance shortly as a Seattle Seahawk. 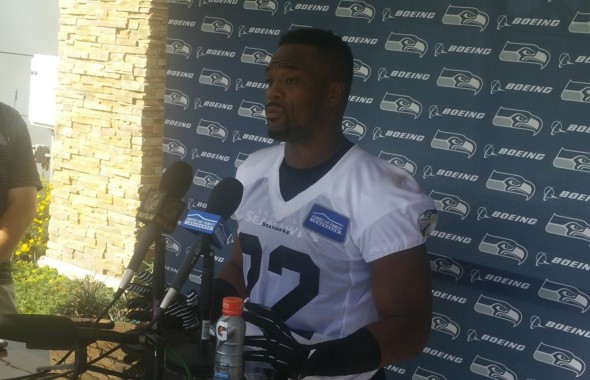 Fred Jackson said the chance to make the playoffs played a big part in the  decision to come to Seattle. / Art Thiel, Sportspress Northwest

When the Seahawks clinched a playoff berth Sunday after defeating the Cleveland Browns, RB Fred Jackson’s son, Braeden, told his father that he’d been waiting his entire life to see his dad go to the playoffs. The nine-year-old wasn’t exaggerating; since entering the NFL in 2006, Jackson has never been to the postseason until now.

“It was well-played by him, I cracked up when I heard that,” a smiling Jackson told a circle of reporters Wednesday. “It’s a lot of fun to be able to joke around and still have a chance to go do it.

“It’s always a goal to have a chance to go chase a Lombardi Trophy, and that’s here for me . . . . We’ve still got a lot of work ahead of us, but it’s something that I’m excited to be a part of.”

At 34, Jackson is the oldest active running back in the league, a steady veteran presence coaching up the younger players.

One of those coaching lessons, backed up by a decade of experience, is not to take the playoffs for granted.

“It’s one of those things I try and tell guys all the time,” said Jackson. “Something I try to pass along: ‘Relish it, because it’s not always a given.’”

Missing the playoffs has become an alien concept for Seahawks players and fans, who have watched the Seattle made a trip to the playoffs in five of the past six years.

DE Cliff Avril remembers that lesson, too. Avril spent five years with the Detroit Lions and made the playoffs once, losing in the 2011 NFC wild card round to the Saints. His first year with the Seahawks, he won a Super Bowl.

“We tell (the young guys) it’s not like this everywhere, so enjoy it, embrace it, because you could be on the other end,” said Avril. “Every year you’re not going to the playoffs, you’re at home, already planning out the first three months of the off-season, so appreciate it.”

Unusual as it is for Seahawks youngsters to not know the feeling of being done in early January, it is strange to think that many of those youngsters have more playoff experience than Jackson.

“The game is heightened,” said Avril. “Everybody is watching, it’s a more intense game than the usual, but it’s a fun environment.”

Jackson’s situational use in a third-down role has left him freshest he’s ever been late in the year.

“We’ve had some tremendous running backs do some things here and my role has been limited because of that,” said Jackson. “Going into this playoff run, if my number’s called, I’ll be ready, with the limited number of touches that I’ve gotten.”

Jackson and DT Atyhba Rubin, getting his first playoff action after a seven-year shutou with the woeful Browns, were mentioned by coach Pete Carroll in a recent team meeting.

“It was the first thing we talked about,” Carroll said Wednesday. “To point out to the young guys where it’s their first year, to realize that it doesn’t always come right away.

“(Making the playoffs) doesn’t come along with being an NFL football player. Those guys really respect it and regard it highly that they have this opportunity. The young guys, they don’t know any better. We have guys in our program that have been with us for a long time. I mentioned to (Earl Thomas) and (Russell Wilson), those guys that have been there for years, this is what we’ve come to expect.”

Even in an area of inexperience, Jackson still manages to serve as an example for younger players, and a hero to Braeden.

For father and son, the playoff payoff draws near. As with a kid rolling in bed anticipating  sunrise on Christmas Day, the long wait is almost at an end.