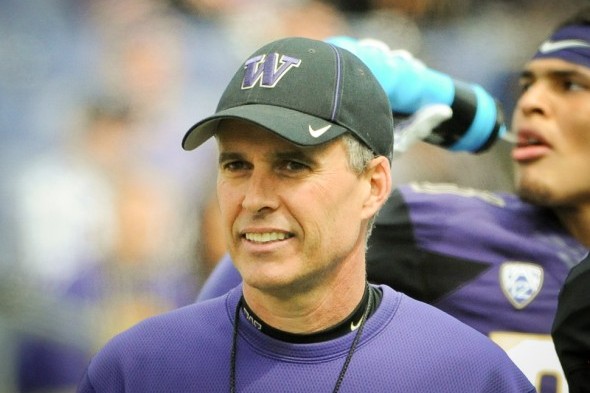 True freshman Myles Gaskin did something Saturday that no University of Washington player, from George Wilson in the 1920s through Bishop Sankey two years ago, has done. He also did something no Huskies runner has done in 43 years. Gaskin ran for four touchdowns, highlighted by his 86-yarder in the third quarter, to lead UW to a 44-31 victory over Southern Mississippi of Conference USA in the Heart of Dallas Bowl at the Cotton Bowl (box).

Gaskin’s four rushing TDs — from 2, 1, 86 and 13 yards — are the most by a Washington player in a bowl game, breaking the mark of three by WR Anthony Allen vs. Maryland in the 1982 Aloha Bowl and matched by QB Keith Price against Baylor in the 2011 Alamo Bowl.

Gaskin, named player of the game, nearly matched McElhenny and Dillon. He had two cracks inside the Southern Miss five-yard line for a fifth rushing TD with less than a minute to play, but after failing to score was removed as coach Chris Petersen settled for Cameron Van Winkle’s third field goal.

Washington, a nine-point favorite, closed with a three-game winning streak at 7-6 and gave Petersen his first bowl victory as the Huskies coach after a loss last year to Oklahoma State.

At 24-24 with slightly more than two minutes remaining in the third quarter and  momentum having swung to Southern Miss, Washington unleashed Gaskin. He took a handoff from Jake Browning, cut inside, changed direction, hit the left sideline and won an 86-yard sprint to the end zone. Southern Miss was never in the game after that. Gaskin’s TD tied for the sixth-longest in UW history, matching the distance of a Rich Alexis score against Arizona State in 2000.

Gaskin accumulated 23 yards on his first 13 carries, which included two short TD runs, and 158 on his next 13. He finished with 181, third-highest total in UW bowl history behind Sankey’s 205 against Boise State in the 2012 Las Vegas Bowl and Rashaan Shehee’s 193 against Michigan State in the 1997 Aloha Bowl.

Browning didn’t throw for a TD, but completed 23 of 34 (67.6 percent) for 284 yards, averaging 8.4 yards per pass attempt. He didn’t throw an interception and consistently kept drives going with third-down completions.

If Gaskin hadn’t been named player of the game, WR Jaydon Mickens would have. He caught eight passes for 95 yards and scored a rushing touchdown on a 23-yard reverse in the second quarter.

Washington amassed 580 yards of total offense, only 40 fewer than the school bowl record of 620 in the 2011 Alamo Bowl against Baylor.

The Huskies limited Southern Mississippi to 375 total yards and 22 rushing — a remarkable total given that the Golden Eagles entered with a 4,000-yard passer and two 1,000-yard rushers. Southern Miss played without one of their 1,000-yard rushers, Jalen Richard, held out with an injury, part of the reason they finished well below their 519.8 yards per game regular-season average.

Washington mostly contained QB Nick Mullens, who threw TD passes of 56 and 27 yards to Michael Thomas, who finished with nine catches for 190 yards.

When the Huskies took the lead for good on Gaskin’s 86-yard run, they had nine tackles for loss and three sacks.

“We’re pleased we got the job done. It was a good, hard-fought game. Southern Mississippi has a high-powered offense and I’m glad we were able to grind it out. The most important thing for us is that we won our last three games. The overall record is what it is, but what does sound good is that over the last three we played very hard and we’re making progress. That’s very encouraging” — Petersen.

“Myles is pretty special and our offense starts with that. When Myles is running between the tackles, he’s so patient, but he’s always finding the right hole. Then he turns it on when he needs to” — Petersen.

After the game, Petersen disclosed that junior RB Dwayne Washington will skip his senior year and enter the NFL draft. “He’s decided to move on . . . hey, we support him,” Petersen said. Washington missed the final four games with a knee injury that required a minor operation, Petersen said. Washington (6-2, 220), from Lakewood, CA., started six games and rushed for 282 yards and seven touchdowns . . . Three other Huskies did not play Saturday, including LT Trey Adams, DB Kevin King and LB Ben Burr-Kirven. UW did not disclose the nature of the injuries . . . Playing for the first time in the storied Cotton Bowl, Washington improved to 18-17-1 all-time in bowl games . . . Petersen is 5-0 against Southern Mississippi, the first four wins coming when he coached at Boise State . . . The Huskies have appeared in six consecutive bowls and are 2-0-1 against current members of Conference USA. . . The Huskies won their past two regular-season games by a combined 97-17 over Oregon State and Washington State to become bowl eligible . . . Southern Mississippi entered as the first school since Oklahoma in 2008 to feature a 4,000-yard passer and two 1,000-yard rushers.

The Huskies open the 2016 season Sept. 3 against Rutgers as part of a three-game nonconference home stand that also includes Idaho (Sept. 10) and Portland State (Sept. 17).