The Seahawks never engaged their rushing game against Arizona’s relentless defensive front and lost to the Rams 23-17 Sunday, snapping a five-game winning streak. 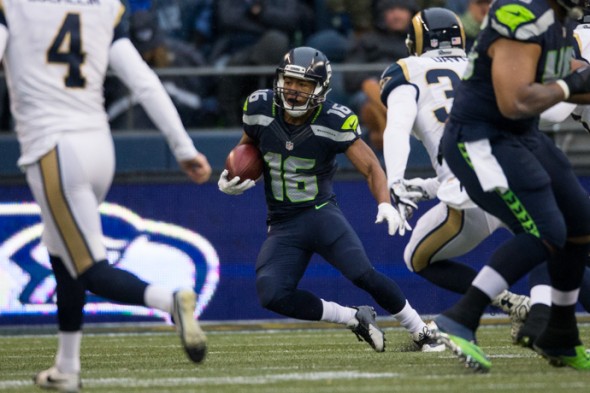 WR Tyler Lockett and the rest of the Seahawks offense often were hemmed in by the Rams’ relentless defense Sunday. / Drew McKenzie, Sportspress Northwest

Good thing the Seahawks clinched a playoff berth last week against Cleveland because they looked nothing like a playoff team Sunday. Committing a comedy of offensive errors and thoroughly dominated by the relentless St. Louis defensive line, the Seahawks lost 23-17 at Century Link Field, ending a five-game winning streak. The loss was also Seattle’s first to the Rams at the Clink since Week 5 in 2004.

The Seahawks — momentarily, at least — retain the No. 5 seed in the NFC, which would mean a first-round playoff date on the road against the NFC East champion Washington Redskins. Depending on developments in the final regular-season weekend, the Seahawks could fall to the No. 6 seed, which would mean a first-round playoff date at the winner of the NFC North, either Green Bay or Minnesota.

The Seahawks never led Sunday, snapping a streak of 62 consecutive games  — the Russell Wilson era — in which they held a lead at some point in the contest. They also couldn’t run the ball, gaining only 60 yards. That ended a streak of 25 consecutive regular-season games (28 including playoffs) in which the Seahawks gained at least 100 rushing yards.

The Seahawks played beyond sloppily. They lost two fumbles and were flagged 10 times for 83 yards, including a 15-yard clipping penalty on LT Alvin Bailey, subbing for injured Russell Okung, which scotched a scoring opportunity.

Sacked only seven times in his past seven games, Wilson went down four times Sunday, was hit an astonishing 17 times and hurried often — either a major regression for Seattle’s supposedly improving offensive line, or a concession that their past five wins have come against less-than-stellar defenses.

Wilson’s streak of five consecutive games with three or more TD passes without an interception ended when a first-half deep throw to Tyler Lockett was picked off in a jump ball by Trumaine Johnson.

Trailing 16-10 early in the fourth quarter, the Seahawks forced RB Bennie Cunningham to fumble at the Seattle 40-yard line that was originally awarded to St. Louis. After the officials huddled, Seattle FS Earl Thomas was credited with a fumble recovery. But upon another review, the Rams retained possession, helping set up Todd Gurley’s two-yard touchdown run that iced the game.

Wilson completed 25 of 41 for 289 yards, two touchdowns, one interception and recorded an 88.4 passer rating. He threw a 25-yard TD pass to WR Doug Baldwin in the third quarter and an 18-yard TD to WR Jermaine Kearse with 17 seconds remaining in the game. Wilson has 31 touchdown passes this season, two shy of the single-season franchise record, and five above his previous career high.

Wilson also led the Seahawks with 39 rushing yards, with a long gain of 21. None of the other backs charged with replacing Marshawn Lynch/Thomas Rawls were up to the task against the superior Rams’ front line. Fred Jackson had 11 yards, Bryce Brown nine and starter Christine Michael six after gaining 84 last week against bottom-feeder Cleveland.

Baldwin, a game-day decision with a hamstring injury, caught eight passes for 118 yards and registered his 11th TD catch in his past five games. TE Cooper Helfet caught four passes after replacing TE Luke Willson, who left after a concussion.

One of the most decisive offensive plays occurred in the first quarter when FB Will Tukuafu, attempting to convert a 3rd-and-1, had the ball knocked loose. LB Akeem Ayers recovered and returned it 45 yards to a touchdown to stake the Rams to a 10-0 lead. It marked the first TD off a fumble return ceded by the Seahawks since Oct. 5 when Caraun Reid of Detroit scored on a 27-yard return.

The Seahawks held the Rams to 207 yards, 103 passing and 104 rushing. But Seattle failed to sack QB Case Keenum, who completed 14 of 23 and consistently delivered on third down, and failed to recover fumbles.

“To start with, let’s just say this is a day we’d like to forget” — Pete Carroll, Seahawks coach.

“Earl (Thomas) thought the ball came to him. He felt like he had the ball the whole time” — Carroll, on the fumble play in the fourth quarter that eventually went to the Rams, setting up the winning touchdown.

“I thought (the game) was hard on Russell. They had penetration on their pass rush and he didn’t have a lot of time. We were way behind staying on schedule. It was very difficult. Field position was huge. We gave them the ball in great field position. It was jut a mess” — Carroll.

“We just didn’t play our best ball. We knew the Rams would come in and play their best ball. There’s nobody to blame. We just have to play better” — Seattle LB Bobby Wagner.

“We were definitely flat. We didn’t play the way we wanted to. We can’t do that again. We’ve got to look at our next game as a game that will kick-start our second season. We’ve got to use it as a statement game” — Jackson, on playing Arizona next week.

“We have a lot of weaknesses that we need to fix. Don’t take anything away from the Rams. They played phenomenal and came out with a great defense” — Baldwin.

Before scoring 17 points against the Rams, the Seahawks had scored 30 or more in four consecutive games and 29 or more in six consecutive . . . Seattle is 27-6 in November/December since 2012, still the best record in the NFL . . . Seattle leads the all-time series with St. Louis 21-14 . . . Seattle has 114 consecutive sellouts at CenturyLink Field . . . Seattle has not allowed a 100-yard rusher since Week 11 of 2014, the longest streak in NFL . . . The Seahawks played without SS Kam Chancellor and LT Russell Okung, both nursing injuries. TE Luke Willson left in the second quarter with a concussion . . . CB Richard Sherman Sunday was named the 2015 Steve Largent award winner. The award, voted on annually by players, is given to the player who best exemplifies the spirit, dedication and integrity of the Seahawks.