Thiel: Seahawks have a week to put wheels back

Their running-backs-by-subcommittee held to 60 yards, the Seahawks suddenly look vulnerable as they head to Arizona needing a quality outing ahead of the playoffs. 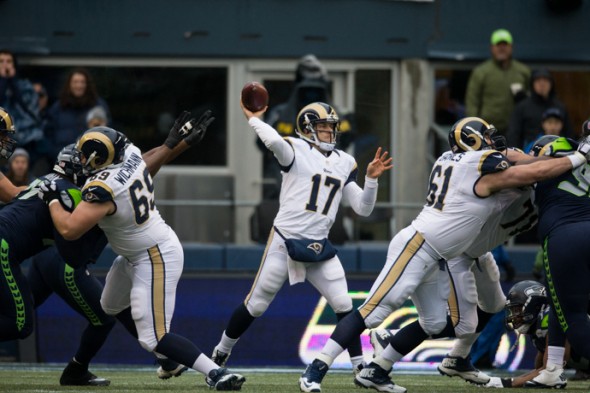 It is easy for Seahawks fans to beseech the football heavens for the return of RB Marshawn Lynch. But fans of the St. Louis Rams, at least the handful that remain pending relocation, could seek the same for injured DE Robert Quinn.

Each side was absent its baddest dude. But so often in the NFL, it isn’t about who’s not there. It’s about who shows up.

They weren’t so bad in the 23-17 to loss to the ruthless St. Louis Rams that the NFL should strip the Seahawks of the playoff bid they secured last week. But they were so sloppy at times and, worse, physically overwhelmed, that anyone is free to consider the Seahawks as a leading contender for a one-and-done playoff experience.

The Rams were tougher on both sides of the line. Here’s the proof besides the seasonal sweep: With 207 yards of offense, they triumphed in a game on the road in the rain, where they hadn’t won in 11 years, against a playoff team that had won five in a row.

Seahawks DE Michael Bennett had a hard time understanding. Here’s how he explained it.

That’s why the Rams are 7-8 and out of the playoff hunt. But they beat Seattle three of the past four games over two seasons because coach Jeff Fisher has a workable template: Bring five on the rush, play a conservative offense, and get lucky.

Despite having to play backup QB Case Keenum, making his 14th career NFL start over four seasons, the Rams had no turnovers, one defensive score and an offensive score that was a single play of 28 yards (their longest play of the game) after a Seahawks turnover. The Rams’ longest drive was 62 yards, the longest run 20 yards and they completed only 14 passes. Yet they made it work.

“Seemed like the ball loved them more than the ball loved us today,” said FS Earl Thomas, offering a cockeyed explanation of the goings-on that was as representative as anything else to explain an afternoon that stunned the record crowd of 69,080 into long periods of mime impressions.

Regarding the rush, the No. 1 draft choices along the St. Louis front made a hash of the undrafted free agents among the Seahawks offensive line. One teensy consolation for the Seahawks is that they are unlikely in the playoffs to face another front as good.

“That front seven is unbelievable,” said WR Doug Baldwin, who had another big day with 118 yards on eight receptions, including a touchdown. “They showed a lot of different things we hadn’t seen on tape.”

The Rams stoned the Seahawks running-backs-by-subcommittee, allowing Fred Jackson 11 yards, Bryce Brown nine, and first-time starter Christine Michael six. Then there was the mistake of giving the ball to seldom-used FB Will Tukuafu, who fumbled on Seattle’s second possession and saw it turn into a 45-yard scoop-and-score by LB Akeem Ayers.

The Seahawks have recovered from similar errors this season, but there was no recovery Sunday because the Rams denied Seattle nearly every option.

“We couldn’t get out of our own way,” coach Pete Carroll said. “We really had a difficult time at the line of scrimmage, moving the ball and protecting. We just didn’t get it done at all.

“Hopefully, this isn’t a sign of anything other than we have to put it behind us.”

The key word there is “hopefully.” Carroll rarely relies on hope. But to have this vulnerability exposed so late is tough to compensate for in a week. Absent via injury Lynch and his able stand-in, Thomas Rawls, the Seahawks’ replacements don’t look so hot against a top-tier defense.

As every Seahawks fan knows, the run game is nearly everything to Seattle’s plan. They rushed for 60 yards Sunday. Coach Bruce Arians of the Cardinals, who host the Seahawks Sunday in the regular season finale, will take due note of every miscue, which he obviously did with the Packers in Arizona’s 38-8 demolition Sunday.

Even though the stakes may be lessened since both teams are assured playoff berths, the Seahawks have to prove the Rams’ domination was an anomaly and not a new trend. That’s hard to do in a week.

Bennett knew the lapse Sunday came at a critical juncture.

“You got to treat every moment like a Super Bowl moment,” he said. “There’s no do-overs, there’s no guaranteed games (at this time of the season).

“We gotta have that mindset every week. If you get teammates to think like that every week, it’s hard to lose. We lost the game; so obviously it wasn’t there.”

Getting it back in one week makes the Arizona game suddenly urgent. The game had the chance to be almost an exhibition-level event, but a Seattle loss at home coupled with the Cardinals’ big win over the Packers suddenly scrambles the egg.

A return of Lynch — there was no word Sunday of anything imminent — can’t solve everything. But it can return the baddest dude to a lineup that went from stirring to shaky in one damp afternoon.