Seahawks should rest players, or not. Vote here

Should the Seahawks rest players in Arizona Sunday or treat the game with the 13-2 Cardinals as another “championship” opportunity? 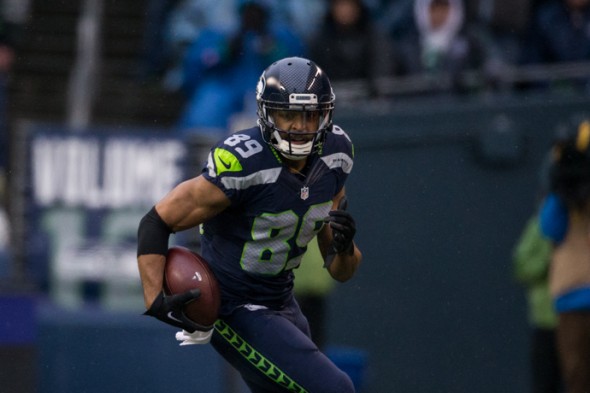 The Seahawks could rest Doug Baldwin Sunday in Arizona, but coach Pete Carroll isn’t likely to do that. / Drew McKenzie, Sportspress Northwest

Former Seahawks coach Mike Holmgren (1999-08) opined Monday during a KJR-AM radio interview that he would seriously consider resting Seattle’s starters next week in Arizona since there is no tangible difference between the fifth and sixth seeds once the playoffs get underway. The Seahawks held the No. 5 seed entering Sunday’s game against St. Louis, but fell to the No. 6 spot after losing 23-17.

With the No. 5 seed, the Seahawks would play Washington in the nation’s capitol in a wild card game. With the No. 6, they would travel to play the winner of the NFC North, either Minnesota or Green Bay. The Vikings and Packers, both 10-5, meet in Week 17 at Lambeau Field Sunday night, and the Seahawks could re-claim the No. 5 seed if the Vikings lose and the Seahawks beat the Cardinals — because Seattle owns the tiebreaker  — a 38-7 win over Minnesota earlier this season.

Regardless of the scenarios, Holmgren suggested that since there is little difference in playing on the road at Washington, Green Bay or Minnesota, the Seahawks would be better off with a rested, healthy team rather than risking more injuries and fatigue at Arizona. But limiting ailing players such as LT Russell Okung (calf), TE Luke Willson (concussion), WR Doug Baldwin (hamstring), SS Kam Chancellor (tailbone) and others would probably mean certain defeat.

Hard to argue with a coach who has taken three teams (two in Green Bay, one in Seattle) to Super Bowls, winning one – except for the fact that Pete Carroll, who has taken the Seahawks to back-to-back Super Bowls and has a legitimate shot at a third, does argue. Carroll has never been a proponent of coaching a giveaway game, and he won’t be doing that in Arizona.

“We’re going to treat this exactly like it is a championship football game, a playoff game,” Carroll said Monday. “We’re going to attack it with the intent of really putting together a good week.”

Sportspressnw.com colleague Art Thiel (Seahawks Have a Week to Put Wheels Back) underscored Carroll’s point, arguing that the Seahawks, who had won five in a row before Sunday’s sudden offensive meltdown, need to demonstrate before the playoffs that their domination by the Rams was an anomaly and not a trend.

There is also this to consider: Teams that enter the postseason on any kind of losing streak almost always get bounced out of the tournament early.

Since the advent of the 16-game schedule in 1978, only 20 teams won a playoff game after entering the postseason with a losing streak of two or more games, which the Seahawks would have if they lose to Arizona.

The 1986 New York Jets entered that year’s playoffs on a five-game slide, then won a wild card game (defeated Kansas City 35-15) before losing in the divisional round (23-20 to Cleveland in OT).

That’s where majority of the 20 teams died – in the divisional round. Of the 20, a mere six made it as far as a conference championship game, and only three reached the Super Bowl. New Orleans (2009) was the only winner.

The six (in the chart, losses = consecutive losses to end the regular season):

So Holmgren says rest the players, get healthy and save the ammo for the Super Bowl run because the Arizona outcome is irrelevant in the grand scheme. But Carroll says full speed ahead, it’s another championship opportunity, and a chance to re-assert after the Rams debacle. Here’s the question:

62 consecutive games with a lead

That streak, corresponding to the Russell Wilson era at quarterback, ended Sunday when the Rams opened a 10-0 lead on the Seahawks and registered a wire-to-wire victory at CenturyLink Field.

This is what Elias Sports Bureau said about that: “Not only was that the longest such streak in NFL history; but half of the 32 current NFL teams have never had such a streak even half as long as Seattle’s, including three clubs that date back to the 1930s: the Bears, Packers, and Redskins.”

The results speak to how incredibly competitive the NFL is and how relevant, in a league premised on parity, the Seahawks have been under Carroll’s direction.