Andrew Andrews tied a career high with 35 points as the Huskies rallied again and again to beat a more experienced UCLA team in the Pac-12 Conference opener. 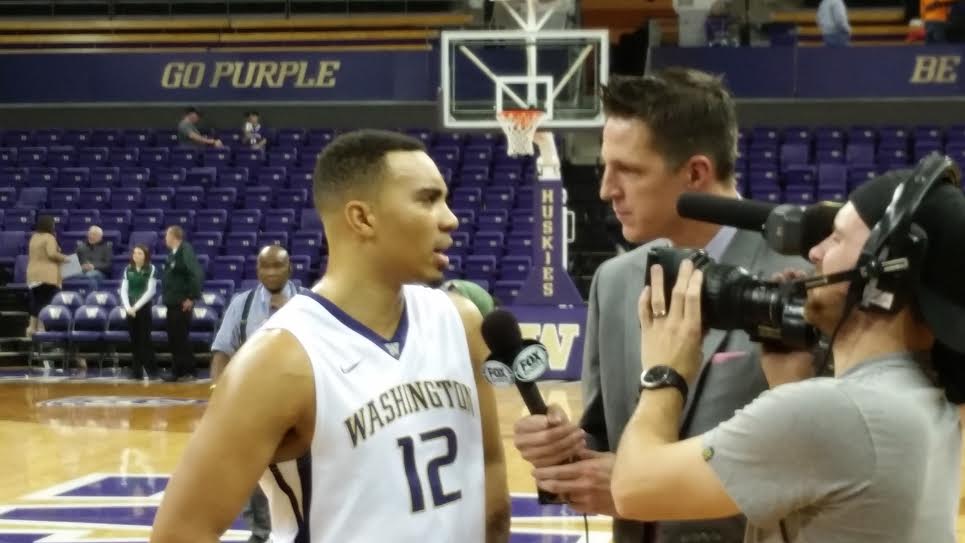 Senior Andrew Andrews led the charge for the Huskies and had a career night in the process. / Andrew Harvey, Sportspress Northwest

Conventional wisdom says all great stage dramas have three acts. In a Friday night foul-fest at Hec Ed, the University of Washington men’s basketball team treated its home fans to four, instead.

In a game that seemed equal parts comedy and tragedy, the Huskies outlasted the 25th-ranked UCLA Bruins, 96-93, after two overtime periods in the Pac-12 Conference opener for both teams. Senior Andrew Andrews tied a career high with 35 points, 17 from the free-throw line.

“If you’re a fan, I would imagine you would really enjoy that basketball game,” said UW coach Lorenzo Romar. “If you’re the coaches? On to the next one. It was a gut-check win for us.”

The game’s open was a comedy of errors. The Huskies went 1-of-10 over the first five minutes of play. The Bruins were polite enough not to pull away, experiencing 2-for-10 shooting woes of their own.

Having sent in the clowns, officials decided that the spectacle might appear more orderly with regular sounds of a whistle keeping the beat.

The Bruins scored 15 points in the first half from the line as they built a 10-point lead with 3:12 to play. The Huskies answered with a Malik Dime alley-oop served up by Dejounte Murray, followed by a Murray three-pointer. At the half, Washington trailed 31-26.

In the second half, comedic trappings gave way to harsher competition. The Huskies drew even on a tip-in by Matisse Thybulle, who drew a foul as he redirected a three-point attempt from Andrews, bringing the Hec Ed crowd to its feet. Thybulle sank the free throw to give Washington the lead with 15:57 remaining.

Washington seemed to ice the game when Andrews drained one from beyond the arc at :32 for a 69-65 lead.

Enter UCLA’s Bryce Alford, who to that point had gone 1-for-12 from the field. Bringing the ball down the court in transition, Alford, whose father, Steve, is the Bruins’ coach, pulled up and sank a three-point jumper, bringing UCLA within one.

After UW free throws, Alford did it again, dropping in a contested shot from three feet behind the arc with nine seconds to go, tying at 71 and sending the game to overtime.

The Bruins took an early lead before Thybulle sank a three from the corner. Andrews added a pair of free throws a minute later, and Washington led by three with 22 seconds to play.

Alford found an open gap when the young Huskies failed to switch their defensive coverage, and sank another three (just his fifth field goal) to force a second overtime.

Romar explained why his team did not foul the 6-foot junior.

“The first time, there were probably eight seconds when he went to take the shot, and we feel that’s a little too early,” he said. “If it gets down to about six, that’s when we’ll do it.

“The second time, we didn’t switch to even foul. The third time, we executed it the way we wanted to.”

As Alford brought the ball down court with his team trailing by three and under seven seconds to go, Murray laid out the Bruin, sending him to the line but denying him the chance to tie the game a third time.

Alford’s 94.4 percent free-throw conversion rate lowered the curtain on his team’s chances, as he made the first, then inadvertently sank the second free throw, despite visibly attempting to miss the second shot to put the ball in play for a tying score.

Andrews secured the inbounds play, and sank both free throws to end the wild ride for the 6,920 in attendance.

“We’ve had more experienced teams (at UW),” Romar said,”that have been in that situation and the game goes into overtimes and (the opponent) hits a shot like Alford hit, and mentally guys aren’t able to recover.

“Tonight we recovered twice in overtime. It speaks a lot for Andrew’s leadership out there, and these guys playing above their age. There were so many heroes.”

A couple of those heroes wound up watching from the bench. Reserve Malik Dime, who scored 15 points, fouled out late in the second half. Noah Dickerson, a big presence in the paint with 10 rebounds (despite no points), fouled out halfway into the first overtime.

But the main event was always Andrews, who equaled his best performance, against Washington State last season. Andrews was a nearly unflappable 17-of-19 from the line.

The game had 64 personal fouls (33 against Washington), but Romar said that adapting to fit the contest was part of the job for his players.

“It’s conference,” said Romar. “You’ve got to turn it up, and I’m sure the officials talked about the same thing: ‘It’s conference play, we want to make sure we call this the way we talked about before the season,’ and obviously it was called a little tight.

“But it’s difficult for those officials, with the way that they’re being mandated to call this.”

Romar was not upset with the number of fouls assessed to his team.

“There were very few, what we would call silly fouls,” he said Romar. “Fouls that we were getting called on, a lot of them we were trying to make the right play . . . If they’re going to call it for both teams, and that’s how the game is played, then no one has an advantage, so be it.”

Despite the disruptions, the Huskies found the right leadership on and off the court and dug deep for the upset.