The Seahawks rolled to a 30-6 halftime lead and thumped the Cardinals 36-6 Sunday in Glendale, AZ., a big bounce-back heading into next week’s wild card game. 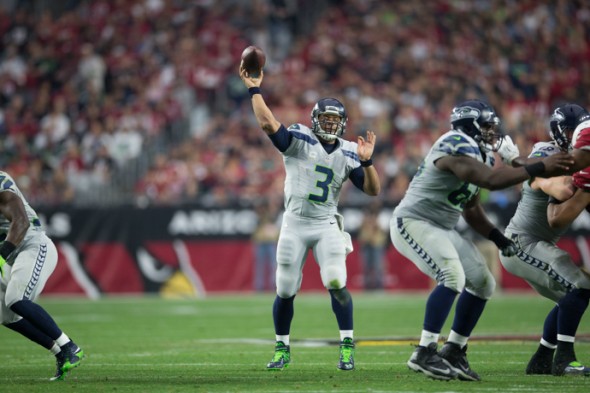 After thumping the Arizona Cardinals 36-6, the Seahawks will play the Minnesota Vikings in an NFC wild card game next Sunday (10 a.m. kickoff) as a result of the Vikings knocking off the Green Bay Packers 20-13 for the NFC North title at Lambeau Field Sunday night. The Seahawks rolled an injury-depleted Minnesota 38-7 at Mall of America Field in Minneapolis less than a month ago.

The Seahawks, who started 0-2 and 2-4 and were still under water after nine games at 4-5, won six of their final seven to finish 10-6, the fourth consecutive year Seattle has had 10 or more wins.

The Cardinals entered with an outside shot at claiming the NFC’s No. 1 seed (Carolina earned  it by routing Tampa Bay), but the Seahawks dominated from the outset, holding the NFL’s No. 1-ranked offense to 232 total yards and one touchdown (PAT missed).

Ahead 10-6 midway through the second quarter, Wilson confounded the Cardinals by throwing a weak-side screen to a wide-open FB Will Tukuafu, a 290-pound blocking fullback, for a seven-yard TD. Tukuafu’s first catch of the season  — on his 32nd birthday — staked the Seahawks to a 17-6 lead that Arizona never threatened. By halftime, Seattle led 30-6, prompting Arizona coach Bruce Arians to pull QB Carson Palmer.

Wilson completed 19 of 28 for 197 yards. His TD throws to Tukuafu, eight yards to TE Chase Coffman and 24 yards to Jermaine Kearse, came before halftime. Wilson had a 123.7 passer rating and became the first quarterback in franchise history to lead the league in passing efficiency (he entered at 109.3).

In his past seven games, Wilson tossed 24 touchdown passes against one interception and had six passer ratings above 100.

RB Christine Michael, an early-season discard (traded to Dallas) who returned to the club in the wake of injuries to Marshawn Lynch and Thomas Rawls, produced his first career 100-yard rushing game, going for 102 on 17 carries. Bryce Brown tallied his first touchdown, scoring from a yard out in the first quarter. Doug Baldwin did not catch a touchdown pass for the first time in six weeks, but led the Seahawks with five receptions for 46 yards.

KR Tyler Lockett factored greatly in setting up Wilson and the offense with advantageous field position. He returned four punts for 139 yards, a team single-game record, with returns of 66, 42 and 31 yards. Lockett shattered the mark of 106 yards by Charlie Rogers at Pittsburgh Sept. 26, 1999.

Lockett’s 66-yard return set up the Wilson-to-Coffman TD that gave Seattle a 24-6 lead. Coffman’s TD was his first as a Seahawk. He had four catches for 29 yards.

By holding the league’s most potent offense to six points, the Seahawks became the first team in the modern NFL era (since 1960), to lead the league in scoring defense for four consecutive years. The Seahawks allowed an average of 17.3.

The Cardinals’ 30-6 deficit at half was their worst first-half performance since Week 14 of 2012.

MVP candidate Palmer, who threw for 363 yards and three touchdowns in a 39-32 win over Seattle seven weeks ago, threw for 129 and completed fewer than 50 percent of his throws before exiting.

The Seahawks held the Cardinals to 27 rushing yards and have not yielded a 100-yard rusher in 22 consecutive games.

The Seahawks had two sacks — 1½ by DE Cliff Avril and a half by DE Michael Bennett — and interceptions by Jeremy Lane, Earl Thomas and DeShawn Shead. Thomas’s sinterception was his fifth. Avril and LB Bruce Irvin also knocked down passes at the line of scrimmage.

“We put together a really good day to finish the season up, particularly since we played such a good football team. We executed in the way we hoped to. So many cool things happened. The consistency of our offense was really good. To lead the league four straight years in scoring defense is remarkable. We take great pride in that. We are confident that wherever we have to go we can get it done” — coach Pete Carroll.

“We put the work in this week. Guys were making plays all over the field. We had a blast today and played championship football. I think we’re doing the right things. We’re doing great on third down.” — Wilson.

“This is an awesome thing to be a part of” — Avril on the Seahawks leading the NFL in scoring defense for a record fourth consecutive year.

The Seahawks are in the postseason for the fourth consecutive year and for the fifth time in six seasons under Carroll . . . The Seahawks, with 19 wins in their past 26 regular-season games, tied the all-time series with the Cardinals 17-17 . . . The Seahawks have beaten Arizona in five of the past seven meetings . . . Wilson has 46 wins to begin his career, most in NFL history over a player’s first four seasons . . . The Seahawks played without SS Kam Chancellor (tailbone), RB Marshawn Lynch (hernia surgery), RG J.R. Sweezy (concussion), LT Russell Okung (calf) and TE Luke Willson (concussion) . . . The Seahawks had one new injury, Lane suffering an oblique strain.