Huskies stun USC with rally from 22 down

Thanks to steady defensive pressure and improved shooting, the Huskies rallied past the Trojans 87-85, overcoming the biggest deficit under coach Lorenzo Romar. 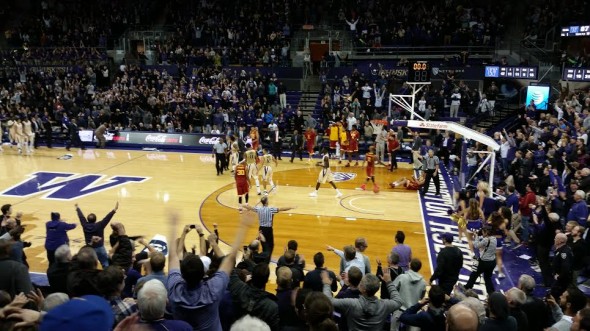 The Huskies players and fans celebrate after a last-second miss by USC. / Andrew Harvey, Sportspress Northwest

When a team goes down 22 with 14 minutes left to play, it’s normally all over but the crying. For the University of Washington Huskies men’s basketball team, however, Sunday was anything but normal. Aided by a pair of late surges, the Huskies overcame a flat first half and stunned USC, 87-85, overcoming the biggest deficit in the Lorenzo Romar era.

“I wouldn’t say I’m surprised as much as very pleased to see us do it,” said Romar. “You look at a group that’s capable of doing something, but you’re just not sure when it’s going to click in.

“Games like this for a young team, early, as you’re still developing . . . these wins are valuable — not only in the win/loss column, but in terms of our own psyche and our own belief within ourselves.

“Now we can always say, ‘Fellas, we were down 22 with fifteen minutes to go.’ Now there are not a whole lot of situations where we can’t say, ‘We’ve still got a chance.’”

While Romar and players might have been the only ones not surprised, the belief made a big difference when a jumper by Katin Reinhardt left them down 66-44.

Washington responded with an immediate 12-0 run that was aided by five USC turnovers over a four-minute span, leaving the Huskies down 10 with 10:19 to play. After a few more traded baskets, the Huskies bore down and closed the gap further in a 10-0 run over a 1:37 span, capped by a David Crisp three in transition.

The surges were the antithesis of their play earlier, including an abysmal 25 percent field goal shooting in the first half, that Romar stopped just shy of calling corpse-like.

“I won’t say we weren’t right, like we didn’t care —  I don’t know if it was just the emotion of the double overtime game the other night, but we were just flat,” said Romar. “We were a step slow defensively, and USC is good, they will exploit you if you’re a step slow.  Offensively, the shots, they didn’t look like they were going to go in . . . it wasn’t that good touch.”

Maybe the bad touch was infectious, because USC’s Jordan McLaughlin came down with a bad case in the game’s closing minutes. The sophomore guard was constantly pressured, and committed a foul and two turnovers that led to five Washington points, including a Dejounte Murray layup to bring the Huskies to 85-84 with  :42 to play.

A big reason for McLaughlin’s collapse came from the increased pressure after junior guard Julian Jacobs left the game with a sprained ankle with 16:14 to go.

“That was probably the defining moment for their team, because that slowed them down,” said Andrews. “We like to trap and take it out of the primary ball-handler’s hands, so when they have both (Jacobs and McLaughlin) in the game, we can’t really trap them.

“When he went down, we were able to corral McLaughlin and get someone else to bring it up (the court). It changed the tempo of the game.”

The moment of truth came with :29 to play, when a 15-foot Murray jumper hit rim and fell into the hands of Andrews, who put the ball back in to give Washington its first lead since the 18:20 mark of the first half.

Andrews’ put-back was worth two of the Huskies’ 23 second-chance points in the second half, a number that Romar ascribed to the fast style of play as the game opened up.

“The game was so spread out, and with us penetrating, playing very loose, there were a lot of openings for guys to go out and get the ball,” said Romar. “But if it had been the same situation in the first half, I don’t know if we would have gotten those rebounds.

“Down the stretch, we came alive, we started to play Husky basketball, in terms of the frenetic pace and effort. I think the rebounds probably came from that.”

The Huskies forced 21 turnovers from the Trojans, the fifth time an opponent has coughed up the ball 20 times or more.

Freshman guard Dejounte Murray had a career-high 29 points, including seven of Washington’s first nine during a sluggish first half..

“It was great to see that,” Romar said. “The way he was playing and pressing and trapping, that was bliss for him, it’s just him going out there hooping, and there are not too many out there better than him.”

Almost as good was Andrews, who had 24 points, four assists, six rebounds and three steals in his eighth time scoring 20 or more this season.

For the second time in as many games, the Huskies have looked uncommon. Romar said it’s just what he expected when he put the team together.

“This is a different group, this is a special group, this is a caring group,” said Romar. “Every one of these guys wants to play in the NBA, but no one is putting their personal agenda ahead of our team. Every one is out there trying to make the other one better.

“You don’t get groups like this all the time. We still have 16 games left in the Pac-12, it’s going to be fun to coach these guys and watch these guys. We’ve been blessed with a good combination of guys, guys who want to be here. They want to be here, they’re not renting out our program.”

Whether that last remark was a shot at last year’s departures from the program, it’s clear that the Huskies are focusing on the future. Despite, or even perhaps because of, their youth, there seems very little that Washington believes itself incapable of.

The Huskies travel to Pullman to take on Washington State at noon Saturday.