In beating the Cardinals 36-6, the Seahawks set up themselves for the playoffs, all on the road, with a third consecutive big road win — with the best defense for the fourth year in a row. 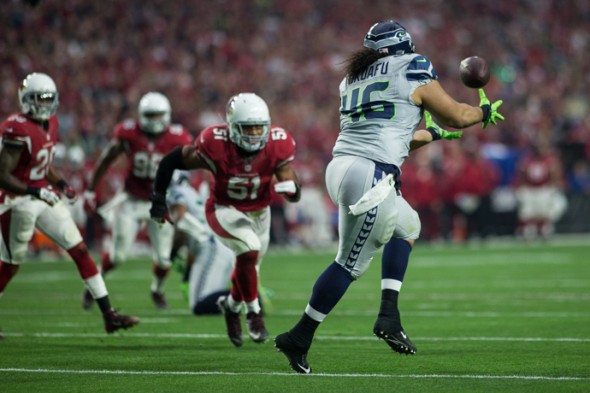 A 290-pound fullback / defensive tackle, Will Tukuafu hauls in a seven-yard pass for a touchdown, a career first, against Arizona Sunday. / Drew McKenzie, Sportspress Northwest

The best teams and best athletes have an acute ability to make disappointments both temporary as well as inspirational. No greater evidence for that was Sunday in Glendale, AZ., where the Seahawks played perhaps their best game against a good opponent since the Super Bowl in New York — a week after a bad game that cost them key starters lost to injury.

Absent from the offense were RB Marshawn Lynch, TE Jimmy Graham, RB Thomas Rawls, LT Russell Okung, RG J.R. Sweezy and TE Luke Willson — half a starting, and starring, lineup. Yet the remainders embarrassed what some considered the best team in the NFC by a 36-6 count that did not do justice to the breadth and depth of the beat-down.

After a season of drama that drifted from 0-2 to 2-4 to 4-5, the Seahawks finished the regular season 10-6 and move on to the playoffs at 10 a.m. Sunday at Minnesota, taking comfort in the fact that they have won their past three road games by at least 29 points each. The last team with such a streak was the 1984 49ers.

“What a cool job these guys did, playing without all those front-line guys, against a team that is really good,” said coach Pete Carroll, who probably pulled off his best single-game management job since the Super Bowl win — maybe better, since that team was relatively healthy and mostly drama-free.

To top off the afternoon at University of Phoenix Stadium, site 11 months ago of the Play That Can Never Be Unseen, the Seahawks became the first team in NFL history to lead the NFL in scoring defense four consecutive seasons.

In a word, Carroll, a defense first-second-and-third coach, was ecstatic.

“I don’t know if there’s a record I could be prouder of than to see our guys go four straight years leading the league in scoring defense,” he said. “That’s a remarkable accomplishment by a bunch of guys dedicated to the program.

“It’s hard to do things over a long period of time that well.”

In post-1994 era of liberalized free agency, the feat is astounding. It was important enough Sunday that everyone on the sidelines knew of the opportunity for the mark. They had to hold hold the NFC’s top-rated offense under eight points, the same offense that put up a six-year-high against Seattle of 39 in Seattle on Nov. 15.

“We knew what was going on,” Carroll said. “Guys were having a ball trying to get it done. “It’s a really cool accomplishment.

“They had a blast because they have so much respect for the team we played.”

It helped that Cardinals coach Bruce Arians pulled at halftime his star quarterback, Carson Palmer, partly to save his 36-year-old body from the ravages of a defense that didn’t have to worry about the run (27 rushing yards). And partly because he was beyond pissed at his team.

“This was a valuable lesson today because you could see it coming all week,” Arians said. “Coaches, players, all of them, fell into that reading-the-press-clippings thing and anointed Super Bowl champs. This was a nice wake-up call.”

Perhaps smugness was what happened to the Seahawks the previous week. Following a five-game winning streak that guaranteed Seattle a spot in the playoffs, they played poorly everywhere in a 23-17 home loss to the Rams and backup QB Case Keenum.

If that was the Seahawks’ wake-up call, the rest of the league must be on high alert.  The two-time-defending NFC champions are back. Carroll wasn’t bashful in saying so.

“I really liked the way we played” in the season’s second half, he said. “Last week was a mess. But the surge we were on, the way we improved — you saw it today on our third-down conversions (8 for 15 for the game). That shift at mid-season has been awesome.”

DE Michael Bennett, who came back strong after an injection in his ailing big toe, sees a similar position, knowing that the 10-6 Seahawks must win three playoff road games in a row, the burden of the lowest-seeded wild-card entrants, in order to return to the Super Bowl.

We’re poised for this situation,” he said. “We got young guys in great situations. We’re primed for this.”

Carroll is a believer in momentum only if he has it — “If you have it, I’d talk that way; if you don’t, I  don’t talk that way,” he said — but with three large road wins and seven of eight overall, the swing in Seattle’s favor is undeniable right now.

“We had a lot of problems at the beginning,” he said. “We made it through all that. We’ve regained our stride.

“(Sunday) demonstrates we’re on our game. Here we come.”

Carroll said he expected Willson, Okung, Chancellor and Sweezy to return to the lineup for the Vikings.