Andrews again is Pac-12 player of the week 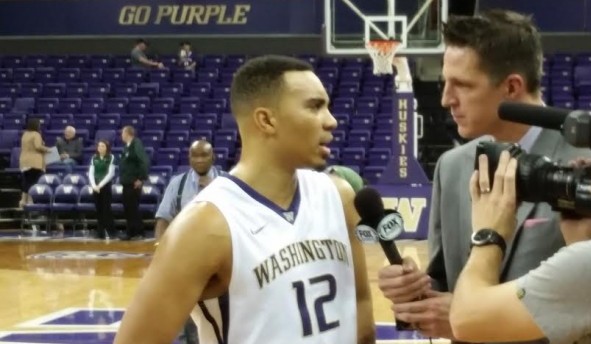 Andrew Andrews is the Pac-12 player of the week for the second time this season. / Andrew Harvey, Sportspress Northwest

Thanks to his efforts in dramatic wins against UCLA and USC over the weekend, University of Washington senior guard Andrew Andrews picked up his second Pac-12 Player of the Week award this season. Andrews scored a career-high tying 35 points in a double-overtime victory against UCLA Friday, before an effort of 24 points, four assists, and six rebounds in a comeback win against USC Sunday.

Andrews is the first Husky to earn multiple player-of-the-week honors in a single season since Isaiah Thomas in 2010-11. The senior scored the game-winning bucket on a put-back layup against USC after the Huskies had trailed by 22 points in the second half.

Andrews has passed the 20-point mark in eight of his 14 games so far this season, and the Huskies are tied with Cal at the top of the Pac-12 at 2-0 ledger.

Washington travels to Pullman Saturday to take on Washington State University at noon.