Seattle crushed 13-2 Arizona 36-6 Sunday, recording the largest margin of victory against a 13-plus win team since the NFL adopted the 16-game schedule in 1978. 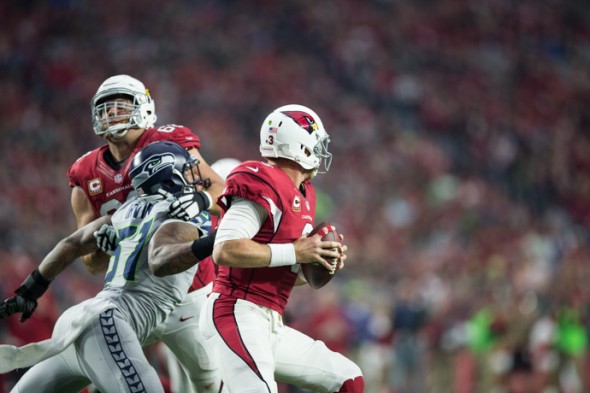 No one, least of all the wizards of odds, suspected that the Seahawks would waltz into Arizona Sunday and render the NFC West champion Cardinals, widely considered no worse than the second-best outfit in the NFL behind Carolina, inept for a day. That’s precisely what Seattle did, running up a 30-6 halftime lead en route to a 36-6 pummeling.

Pummeling = holding the Cardinals to 26.6 points under their league-leading scoring average per game while also scoring 36 against a defense that came in allowing 18.5. The Seahawks tallied 30 of the 36 in the first half, and only twice all season did the Cardinals allow more than 30 in an entire game.

Given the splendid season that coach Bruce Arians and the Cardinals had put together (13-2), that outcome would have been surprising even if the Seahawks  deployed RBs Marshawn Lynch or Thomas Rawls, T Russell Okung, RG J.R. Sweezy, TEs Jimmy Graham or Luke Willson and S Kam Chancellor, all out with injuries.

But the game was over by halftime after QB Russell Wilson fired three touchdown passes, including a pair to two guys, FB Will Tukuafu and TE Chase Coffman, who had never before caught a scoring pass for the Seahawks — in other words, two of the unlikeliest targets in NFL history.

“We put together a really good day to finish the season up, particularly since we played such a good football team,” said coach Pete Carroll. “We executed in the way we hoped to. So many cool things happened. The consistency of our offense was really good.”

“Guys were making plays all over the field,” added Wilson. “We had a blast today and played championship football.”

When Carroll said the Seahawks “put together a really good day,” he didn’t explain the half of it. Since 1978, the first year the NFL expanded to a 16-game schedule, 67 clubs have won 13 or more games in a regular season, topped by the 2007 New England Patriots, who finished 16-0 (six other teams, including this year’s Panthers, finished 15-1).

Of the 67, only eight had a loss by a margin of 20 or more points after entering a game with 13 or more wins. And none of the eight were pounded as thoroughly as were the Cardinals. The 1997 San Francisco 49ers, 13-2 entering the final game of that season, came close. Seattle laid a 38-9 number on those Niners, who flamed out three weeks later to Green Bay in the NFC title game.

“When Seattle is firing on all cylinders, they can beat anybody in the league,” former head coach Jimmy Johnson told a FOX TV audience Sunday. “Nobody wants to see them in the playoffs.”

Johnson and most of the other network talkers were all over the pre-game fact that Wilson had an opportunity Sunday to become the first quarterback in NFL history to finish a regular season with 4,000 passing yards, 30 touchdowns and 500 rushing yards.

Wilson needed 173 passing yards to reach all benchmarks, easily attained that and finished the season with 4,024 yards, 34 TD passes and 553 rushing yards, his best overall year by far.

What no network talker had time (or inclination) to do was add the perspective of which quarterbacks came close to duplicating Wilson’s 4,000+-30+-500  feat. The short answer is: Way fewer than you might think. In fact, to fully appreciate what Wilson did, do this: lower the 4,000-yard passing standard by al 1,000 yards to 3,000. Also lower the 30-TD pass requisite to 25 and the rushing yards total from 500 to 400.

How many quarterbacks had a combination of 3,000 passing yards with 25 TDs and 400 rushing yards? Eight. Factor in a passer rating above 95.0 (Wilson won the league title at 110.1), and the list is whittled to five.

Wilson, Dante Culpepper and Steve Young are the onl quarterbacks to do this in multiple seasons (this year’s probable MVP, Cam Newton, has done it once). The list, chronologically:

The irony, of course, is that Wilson hit his numbers – 4,000+, 30+, 500+, 100.0+ — without a lead back (in fact, with castoffs) most of the year, with deep backups at tight end, with undrafted free agents at two receiver positions, and with an offensive line that didn’t reach NFL quality until week 10.

Offensive coordinator Darrell Bevell was asked a couple of weeks ago how the offense would change once Lynch, back at Seahawks headquarters Monday, returns to the lineup.

“He,” Bevell said of Beast Mode, “is going to have to adapt to what we’re doing now.”

For the Seahawks, now has never looked better.