RB Marshawn Lynch worked out Monday for the first time since his abdominal surgery Nov. 25. Coach Pete Carroll anticipates Beast Mode will be ready to play Sunday in the playoffs. 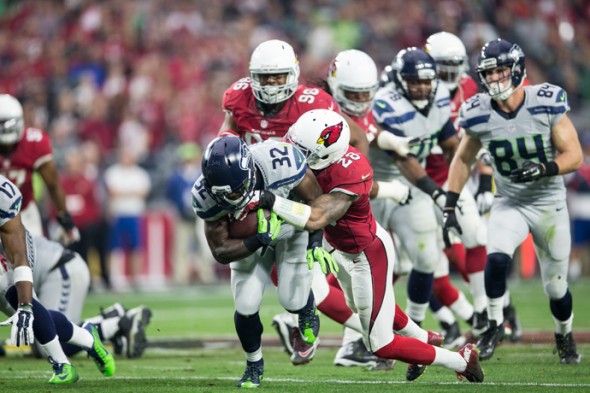 Now that preliminaries have been dispatched, The Quest for the Lost Yard boils anew. The Seahawks return to the playoffs upon the Norse-riddled shores of Lake Wobegon, and they bring with them The Beast.

“He’s in the program,” said coach Pete Carroll Monday of RB Marshawn Lynch. “We’ll see if he can handle it and I expect he will.”

Following a game in which the Seahawks ran for 147 yards over the NFL’s fifth-ranked defense in a 36-6 dope-slap of the Arizona Cardinals, Lynch’s return for the wild-card game in Minnesota (10 a.m. Sunday, NBC) makes it seems as if they’re adding a high first-round draft choice to the two-time defending NFC champs.

“I think so,” he said. “This is similar to the first game of the year, really, is what it would be like. We don’t have any different expectations than that.”

Lynch last played Nov. 15 and had abdominal surgery Nov. 25 to repair a sports hernia, missing nearly all of the Seahawks’ post-bye offensive renaissance. Carroll didn’t want to put too much certainty on the full recovery of a player who has never experienced surgery, especially since he has spent most of his rehab time in the Bay Area working with his longtime trainers at Empower Gym.

“Wednesday we’re going to practice and see how he feels and how far he can take it,” he said. “He’s worked out in incredibly competitive situations getting physically ready to go. Now we have to translate that to football.

“I’m not worried about having to work him into the system. It’s been a while, but he’ll be fine.”

Given the progress displayed Sunday by Lynch’s primary replacement, Christine Michael, the Seahawks may seem to have an embarrassment of riches. But given the brutal path to redeeming the Super Bowl failure — up to three road games, nothing like the previous year’s nursery-school routine of a bye and two home games — there is no such thing as a luxury of talent.

Michael is coming off his first career 100-yard game (102 in 17 carries, including a 45-yarder) in a stunted career that has taken its first uptick since the Seahawks used a second-round pick to draft in him in 2013.

“He’s produced when he’s had his chances, he’s played really hard, he’s been really serious about every step of the way,” Carroll said. “He’s just done a marvelous job in this very short time. So we have nothing but the highest of expectations.”

Michael is another story of a player who was overlooked/dismissed/denigrated, yet found a haven with the Seahawks. Only it was the Seahawks who discarded him, getting a seventh-round pick from the Cowboys in a September trade, then cast off again by Dallas before landing on Washington’s practice squad, where the Seahawks found him.

“This is the classic example if you just keep staying with it, and give guys chances, that sometimes they just come right through for you,” Carroll said. “It’s only a few games, but there are really strong indicators that he’s ready to take advantage of this opportunity. Nothing less than what we had hoped for a while back.

“Sometimes it’s a strange course you got to go to get here, but it’s working out. I think he’s more humble than he was. I think he was really trying to be flashy. (Now) he comes to work every day and he’s really serious about fitting in. It just feels like he’s matured.”

Carroll was thrilled to cite the contributions of the backups: Alvin Bailey at tackle, rookie rookie Mark Glowinski at guard and newcomer Chase Coffman at tight end.

“We were really excited to see some guys jump into roles and play some front-line football,” he said. “It was fun to see who scored touchdowns for us too: Will Tukuafu, Bryce Brown and Chase Coffman, along with Jermaine (Kearse). You wouldn’t have thought that a little while ago that those guys would be in the stats.

“It’s exciting to see those guys come through and help us get a really fun win.”

The  failure to get one of the NFC’s top two seeds and its reward of a first-round bye means the Seahawks are likely to rely more on depth, which is a hard thing to come by, especially after rewarding QB Russell Wilson and LB Bobby Wagner with big contracts that put them hard against the salary cap.

But it sounds as if nearly all will be returning this week, eager to welcome back the Beast.

For the players and the 12s, prepare to grab your crotches.