Ken Griffey Jr. earned election to the Baseball Hall of Fame Wednesday, becoming the first player drafted and developed by the Mariners to earn that distinction. 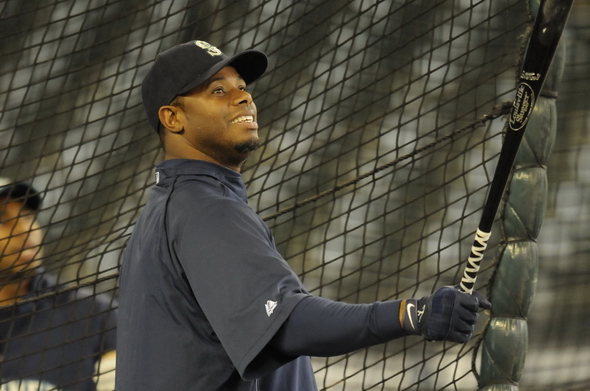 Ken Griffey Jr. employed the simplest of philosophies — “See ball, hit ball” — and Wednesday parlayed it into a near-unanimous election to the Hall of Fame. Based solely on receiving a record 99.3 percent of the vote from the Baseball Writers Association of America, a reactionary bunch that has never considered any player flawless, Griffey will enter Cooperstown July 24 as the closest to perfect ever to play.

The 13-year Mariner (1989-99, ’09-10), always considered a shoo-in for enshrinement when he reached his first year of eligibility (he is the 51st first-ballot HOF member), was named on 437 of 440 ballots (the three naysayers have yet to turn themselves in for a well-deserved public flogging). The only other player elected to the Class of 2016 was catcher Mike Piazza, a 12-time All-Star who received 83 percent of the vote. 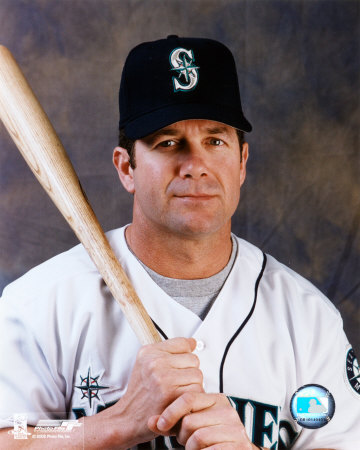 Wednesday would have been almost too big to absorb if Griffey’s former teammate, Edgar Martinez, had been able to join Griffey among baseball’s immortals. But Martinez, on the ballot for the seventh time, again fell short of the required 75 percent. However, he received 43.4 percent, which bodes well: It marked Martinez’s highest percentage during his time on the ballot.

“I’m happy and shocked,” said Griffey on MLB Network. “I’m happy that I get to be in such an elite club. I want to thank the writers for punching my name. I’m shocked, because anytime anybody does something for you, it means a lot.

“When I came up to the Mariners, I was a teenager and just wanted to play baseball. I didn’t have an understanding of the media and fans, having just come from high school. I knew I could play baseball, but it was an adjustment getting to know people and growing up.”

Griffey mentioned that he played in three Hall of Fame games in Cooperstown, NY., in recent years but never visited the Hall of Fame — on purpose.

“I am really superstitious,” he said. “I didn’t want to set foot in the place until I was in the Hall of Fame. The only time I wanted to go there was as a member.”

In a statement, Mariners CEO Howard Lincoln said: “On behalf of everyone associated with the Seattle Mariners, congratulations to Ken Griffey Jr. on his election today to the National Baseball Hall of Fame. This is a great day for Mariners fans and really all baseball fans to celebrate his outstanding career and love of the game.

“In addition to his accomplishments on the field, Ken should be applauded, along with his teammates, for solidifying Major League Baseball in Seattle and the Northwest, and for being a wonderful family man who has given generously to local and national charitable causes, in particular helping young people.” 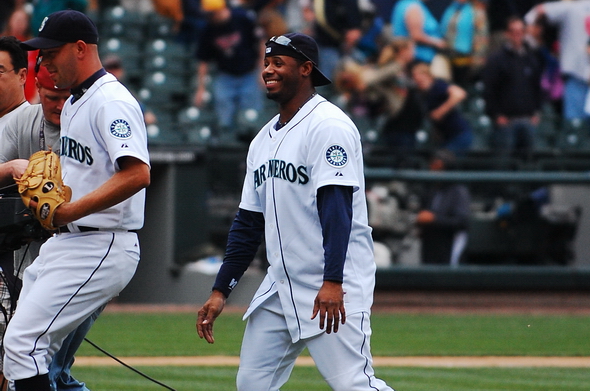 Griffey showed Hall of Fame potential as a teenager in the late 1980s. By 1997, he was practically a lock for election. Everybody could see that. In fact, there was even speculation around the Kingdome batting cage as early as 1997 that Griffey had a chance to become a unanimous Hall of Famer. By 1999, when Griffey left Seattle for Cincinnati, the only question was how high could he go. He was already well on track to become the most productive long-ball hitter in history.

A series of injuries over the next seven seasons ultimately prevented that, “limiting” Griffey to 630 (sixth all-time and 417 for Seattle) home runs to go with a unanimous MVP (1997), an All-Star Game MVP (1992), 13 All-Star appearances, 10 Gold Gloves and seven Silver Slugger awards. But Griffey was bigger than his staggering numbers.

His infectious personality and prodigious performances, at the plate and in center field, kept a dithering Mariners franchise afloat from 1989 through the mid-1990s. By late 1995, when it seemed inevitable the Mariners would decamp to Florida or northern Virginia, Griffey came to the rescue.

With the Mariners languishing 11 games behind the Angels in the AL West Aug. 24, Griffey bashed a ninth-inning, two-run homer off the Yankees’ John Wetteland. The victory sparked an improbable six-week rally that culminated in Seattle’s first AL West title.

The run that Griffey scored to beat the Yankees in the ALDS Oct. 8, roaring from first to home on a looping double to right by Martinez, saved major league baseball for Seattle, sparking action by Gov. Mike Lowry and the state Legislature that resulted in the construction of Safeco Field.

Griffey not only awed on the diamond, he did so with no hint of connection to MLB’s long-running scandal over performance enhancing drugs that ultimately engulfed the careers of Barry Bonds, Mark McGwire and Roger Clemens, among a multitude of others.

Griffey also changed street fashion in America by wearing his baseball cap backward, reflective of his playful personality. He once paid off a steak-dinner bet to manager Lou Piniella by leaving a cow in Pinella’s spring training office. He also occasionally fed fake stories to the media just to laugh at the reaction.

“We love Ken Griffey Jr.,” Hall of Famer Reggie Jackson famously said during Griffey’s prime years in Seattle. “He is everything we would like to be. He’s young, he’s good-looking, he’s got the best smile in the world and he’s a heroic athlete. He is a shot in the arm for baseball. He is what the game needs. He is creating excitement and making headlines just by his presence.There hasn’t been anyone like that since . . . me.”

“I used to enjoy going to the ballpark every day because I knew something special was going to happen. Junior was an absolute pleasure, a God-send, an enormous talent. I told our coaches, just let him play, let him play. To be voted to the Hall of Fame is one thing. But 100 percent? That’s the ultimate tribute” — Jim Lefebvre, Griffey’s first manager in Seattle.

“First, I want to congratulate Ken on his election today. Both as a teammate and as a player, it was obvious that he was a Hall of Famer. The news today isn’t a surprise, but it is well deserved. For me, I am really encouraged, and thankful, in the increase of votes. I certainly didn’t expect to be elected today, but it is always a little disappointing when it becomes official. Although, I’m so happy for Ken that makes it a little easier” — Edgar Martinez, on Griffey’s election and his own vote total.

“I loved competing against him and I loved being around him” — John Smoltz, Hall of Famer, Class of 2015.

“I’ve never seen a swing to equal his. I grew up with him. He’s like a brother. The excitement for me on this day is astronomical” — Harold Reynolds, former teammate and MLB Network broadcaster.

“Griffey’s grace and power were unmatched. It is an honor to have Ken Griffey Jr. join us in the Hall of Fame” — Johnny Bench.

“If anybody was going to break my record, it had to be Ken Griffey Jr. He is most deserving” — Tom Seaver, after Griffey collected 99.3 percent of the HOF vote, eclipsing Seaver’s previous mark of 98.84.

Griffey’s career with — and without — the Mariners

Congrats to the Legend Ken Griffey Jr. No one like him! Seattle will never forget you nor the Game! #GOAT pic.twitter.com/X2h263ZLZA